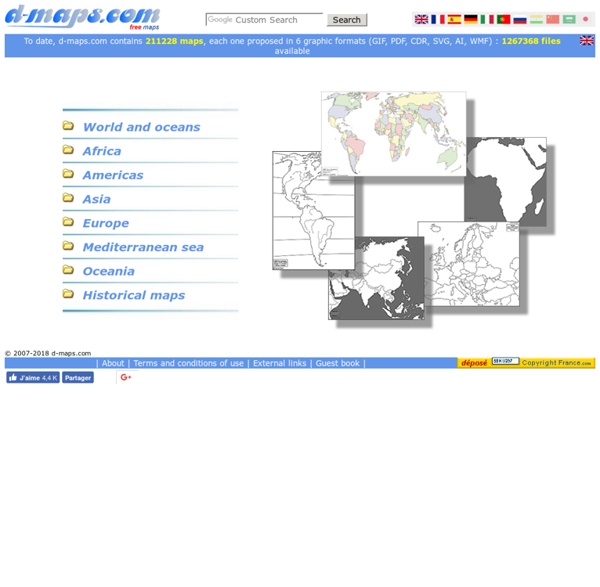 How to Make a Simple Paper Spider in its Web: More DIY Halloween Decorations! First, take a square piece of paper and fold it in half. I usually just start cutting out the spider freehand, but if you prefer, draw the spider on the paper first, like this: Then cut out everything surrounding the spider’s body and legs, leaving a border around the edge. Open it up and there you have it: A creepy paper spider to hang up for Halloween. Tip: If you want the spider to be a black widow, cut a diamond shape out of the abdomen and tape a piece of red paper behind it.

40 maps that explain the world By Max Fisher By Max Fisher August 12, 2013 Maps can be a remarkably powerful tool for understanding the world and how it works, but they show only what you ask them to. So when we saw a post sweeping the Web titled "40 maps they didn't teach you in school," one of which happens to be a WorldViews original, I thought we might be able to contribute our own collection. Using the Web to Take Virtual Field Trips By: Kennedy Schultz Helping kids learn about the world can be an exciting adventure for both adults and kids. When I teach about the chateaux of the Loire Valley in France or ancient Mayan sites in Mexico, I’m always looking for kid-friendly resources that can provide accurate information and engaging authentic pictures that hold the attention of little ones. Virtual Field Trips Since my field trip budget is pretty limited, I especially love websites that offer virtual tours and live webcams to show kids what it REALLY looks like in another world location.

Learn to Draw Animals Print and enjoy our Learn to Draw Animals pages for kids of all ages. Kids can use our step by step illustrations to discover how to draw all sorts of animals and build up their skills and confidence in the process...plus they are just good fun! You could build up a whole folder of these printable pages for rainy days - teachers might even want to laminate them and keep them ready as a time-filler or reward. This map of Earth is the most accurate ever produced, and it looks completely different Japanese architect Hajime Narukawa claims to have tackled a centuries-old problem - how to draw an oblate spheroid Earth on a flat plane. He claims the above map, called the AuthaGraph World Map, achieves this task. The projection, first created in 1999, frames the world's physical components in a 2D rectangle, attempting to represent their relative sizes as accurately as possible. It does so by dividing the world into 96 triangles, making it a tetrahedron, then unfolding it to become a rectangle. Unlike the traditional Mercator map, made in the 16th century, which overstates the size of northern areas like Greenland and minimizes that of central areas like Africa, the AuthaGraph World Map retains parity of area to a 3D projection. The projection recently won the 2016 good design grand award in Japan, an awards evening founded in 1957 by the Japanese ministry of international trade and industry.

Geografi - Studi.se Upload Studi.se Studi.se Loading... Download 422 Free Art Books from The Metropolitan Museum of Art You could pay $118 on Amazon for the Metropolitan Museum of Art’s catalog The Art of Illumination: The Limbourg Brothers and the Belles Heures of Jean de France, Duc de Berry. Or you could pay $0 to download it at MetPublications, the site offering “five decades of Met Museum publications on art history available to read, download, and/or search for free.” If that strikes you as an obvious choice, prepare to spend some serious time browsing MetPublications’ collection of free art books and catalogs. You may remember that we featured the site a few years ago, back when it offered 397 whole books free for the reading, including American Impressionism and Realism: The Painting of Modern Life, 1885–1915; Leonardo da Vinci: Anatomical Drawings from the Royal Library; and Wisdom Embodied: Chinese Buddhist and Daoist Sculpture in The Metropolitan Museum of Art.

Maps Have Been Lying To You Your Entire Life The truth is that every map tells a lie, but they don’t all lie about the same thing. For example, Mercator projection maps—one of the most common in use today—exaggerate regions far from the equator. The Goode homolosine projection (pictured below) shows continents that are sized appropriately to one another, but with many interruptions and distortions of distance. Image Credit: Strebe / Wikimedia Commons This give-and-take of benefits has been a perennial problem in cartography. The issue is due to projection, which in map-making results from trying to turn a spherical globe into a flat plane.