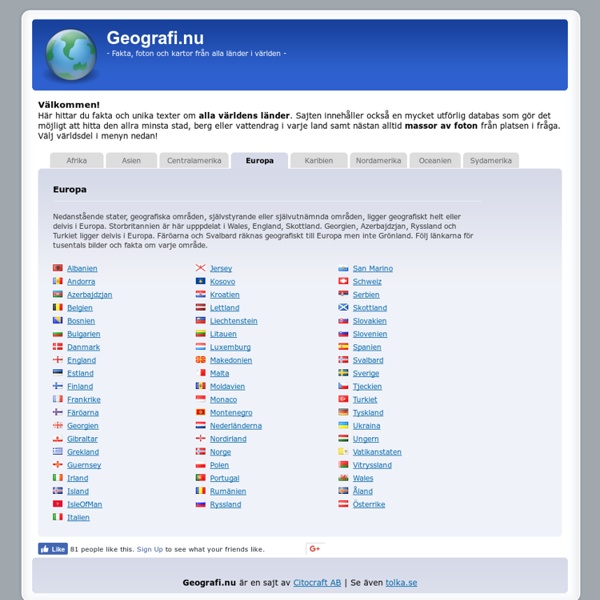 Walk through the Continents - Print Maps Large and Small - Free Print free maps large or small; from 1 page to almost 7 feet across; PC or Mac. For classroom and student use. MegaMaps requires Adobe Flash. Plate Tectonics - Earth Like a Puzzle - Children learn about plate tectonics, earthquakes, and volcanoes at this site in Scripps Institution of Oceanography by Nan Criqui Most people know that Earth is moving around the Sun and that it is constantly spinning. But did you know that the continents and oceans are moving across the surface of the planet? Volcanoes and earthquakes as well as mountain ranges and islands all are results of this movement.

40 Maps That Explain The Middle East Maps can be a powerful tool for understanding the world, particularly the Middle East, a place in many ways shaped by changing political borders and demographics. Here are 40 maps crucial for understanding the Middle East — its history, its present, and some of the most important stories in the region today. Middle East History The fertile crescent, the cradle of civilization The fertile crescent, the cradle of civilizationIf this area wasn't the birthplace of human civilization, it was at least a birthplace of human civilization. Called "the fertile crescent" because of its lush soil, the "crescent" of land mostly includes modern-day Iraq, Syria, Jordan, and Israel-Palestine. (Some definitions also include the Nile River valley in Egypt.)

Scandinavian - Scandinavian America - Immigration...- Classroom Presentation Scandinavian America The Scandinavian immigrants not only built new lives in the United States; they also built a new culture. As immigrants from Scandinavia flooded into sparsely populated areas of the U.S., they helped create a particularly Scandinavian way of life, melding the varied religious, culinary, literary, and linguistic traditions that they brought with them with those that they found in their new country. During the late 19th and early 20th centuries, in the Great Lakes states, the northern Great Plains, and in enclaves scattered among northern U.S. cities, a visitor might imagine that he or she was traveling through a unique new nation—Scandinavian America.

National Geographic Magazine - NGM.com Skip to this page's content National Geographic Society P.O. Box 98199 Washington, DC 20090-8199 USA Sign InJoin 40 Maps That Will Help You Make Sense of the World If you’re a visual learner like myself, then you know maps, charts and infographics can really help bring data and information to life. Maps can make a point resonate with readers and this collection aims to do just that. Hopefully some of these maps will surprise you and you’ll learn something new. A few are important to know, some interpret and display data in a beautiful or creative way, and a few may even make you chuckle or shake your head. If you enjoy this collection of maps, the Sifter highly recommends the r/MapPorn sub reddit.

Why Do Rivers Curve? - A Video and a Game Why Do Rivers Curve? is a short video produced by Minute Earth. The video explains and demonstrates the role of erosion in forming the bends in a river until an oxbow lake is formed. Classroom Timers - Fun Timers We've decided to put our new fun timers, and timers for classrooms into a nice sub-section. These are great timers for children, or maybe meetings, or anything really. They just add some extra fun to the usual countdown timers :-) Classic Classroom Timers: Explosive Fun Timers:

World Map Geography Activities For Kids + Free Printable After our Solar System Activities, I figured we needed to talk about things a little closer to home, or at least on our planet. So today I am sharing our World Map activities and free printable that can be used as coloring pages for the continents as well as labels for matching and reading. So when I was in school I remember being taught that there are 7 continents (North America, South America, Asia, Europe, Australia, Africa, Antarctica) and I always thought it was weird that Asia and Europe were considered continents even though they are clearly attached together. Some now believe that there are only 6 continents combining Europe and Asia, and still others believe there are only 5 continents combining North and South America. I really like the 6 continent idea so I made a 7 continent printable and a 6 continent printable to make sure she would learn both ways so she would be familiar with both terms.

Printable World Flags To make watching the Olympics on TV at home more festive and exciting, for a world travel themed party or to celebrate any international occasion, we’ve put together these 100 countries printable world flags in one file, in perfect sizes to make party bunting with. Download Each page has 10 flags with the name of the country on the side tab. Fold over this tab to use the flags as bunting. Children can try recognising and guessing the flags and then learn the country names of each flag written on the back flap.