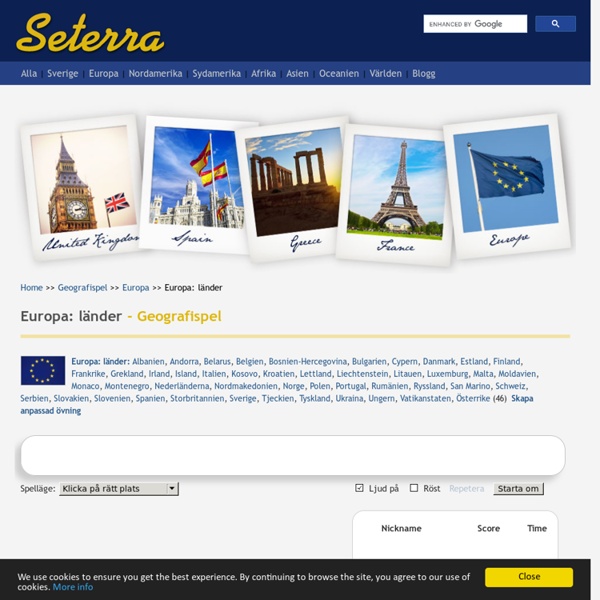 Plate Tectonics - Earth Like a Puzzle - Children learn about plate tectonics, earthquakes, and volcanoes at this site in Scripps Institution of Oceanography by Nan Criqui Most people know that Earth is moving around the Sun and that it is constantly spinning. But did you know that the continents and oceans are moving across the surface of the planet? Volcanoes and earthquakes as well as mountain ranges and islands all are results of this movement. Less than 100 years ago, many scientists thought the continents always had been the same shape and in the same place. A few scientists noted that the eastern coastline of South America and the western coastline of Africa looked as if they could fit together.

40 Maps That Explain The Middle East Maps can be a powerful tool for understanding the world, particularly the Middle East, a place in many ways shaped by changing political borders and demographics. Here are 40 maps crucial for understanding the Middle East — its history, its present, and some of the most important stories in the region today. Middle East History The fertile crescent, the cradle of civilization The fertile crescent, the cradle of civilizationIf this area wasn't the birthplace of human civilization, it was at least a birthplace of human civilization. StudiSverige - YouTube Categories Pinterest Log in More to explore: Youtube Visit Site Scandinavian - Scandinavian America - Immigration...- Classroom Presentation Scandinavian America The Scandinavian immigrants not only built new lives in the United States; they also built a new culture. As immigrants from Scandinavia flooded into sparsely populated areas of the U.S., they helped create a particularly Scandinavian way of life, melding the varied religious, culinary, literary, and linguistic traditions that they brought with them with those that they found in their new country. During the late 19th and early 20th centuries, in the Great Lakes states, the northern Great Plains, and in enclaves scattered among northern U.S. cities, a visitor might imagine that he or she was traveling through a unique new nation—Scandinavian America. Language and Education As Scandinavian immigrants arrived in the U.S., they brought a diverse group of native languages with them, and they quickly established institutions to nurture and promote their linguistic heritage. Many Scandinavians also took an active role in the burgeoning U.S. labor movement.

Biosphere: Erosion Erosion is the process that breaks things down. As far as we're concerned, erosion is the breakdown of the continents and the land around you. The overall effect of breaking down and weathering the land is called denudation. Denudation is the process of erosion. 40 Maps That Will Help You Make Sense of the World If you’re a visual learner like myself, then you know maps, charts and infographics can really help bring data and information to life. Maps can make a point resonate with readers and this collection aims to do just that. Hopefully some of these maps will surprise you and you’ll learn something new.

An Illustrated Guide to Space Maps Nebra Sky Disc, Germany, 1600 BC. (Photo: Rainer Zenz/WikiCommons CC BY-SA 3.0) With its patinated bronze background and shiny gold sun, moon and stars, the 3600-year-old Nebra Sky Disc is worth gazing at for its beauty alone. But the ancient object is cool for a lot of other reasons: It’s the earliest depiction of outer space we’ve ever found, and it’s also thought to be the oldest known portable astronomical instrument. For as long as humans have stared at the sky, we have sought to understand our place in the cosmos. Classroom Timers - Fun Timers We've decided to put our new fun timers, and timers for classrooms into a nice sub-section. These are great timers for children, or maybe meetings, or anything really. They just add some extra fun to the usual countdown timers :-)

The 100 Most Beautiful and Breathtaking Places in the World in Pictures (part 1) From majestic waterfalls, and lost cities, to mysterious landmarks and natural wonders, here is a collection of pictures which is worth to be looked on. Feel free to share your favorites destinations! It would be so amazing if you could visit all of these places. Stay in a resale RCI Timeshare to visit one of these amazing places on a budget. Aogashima Volcano, Japan Petra, Jordan