The Art of Disney Animation 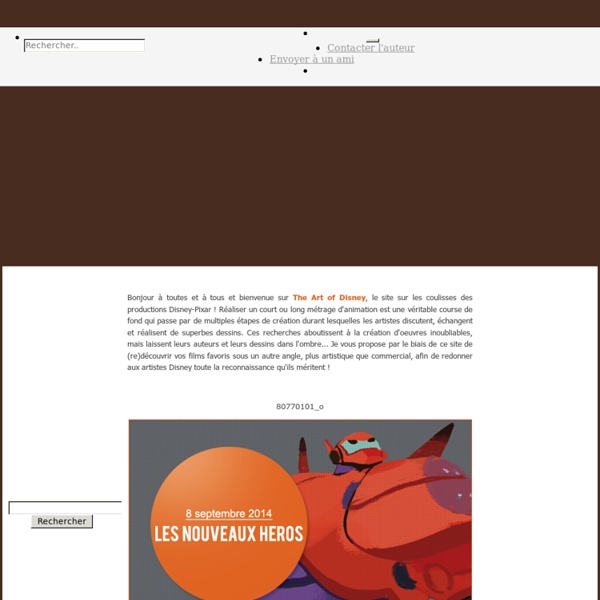 The Cinematography of "The Incredibles" Part 3 See Part 1 here, and Part 2 here.Continuing with my case study of the shot compositions from Pixar's film "The Incredibles". All images used here are ©Disney/Pixar (unless otherwise stated). Cinematography is the art of composing the scenes of the film so they can visually tell the story in a functional and creative way. The purpose of composition is to direct the viewer's eye to the central point or "story" in your scene.

Step by Step: Cabeza Patata We’re happy to bring you the next installment of our every so often series, Step by Step, this time from the amazing duo Cabeza Patata! Cabeza Patata is comprised of illustrator and craftswoman Katie Menzies and 3D artist and animator Abel Reverter. Together, they have a wonderfully unique style that mixes many of the best aspects found in the world of stylized illustration with the latest and greatest looks from the realm of Cinema 4D. The two recordings in this post show their process from initial sketch and 2D design (above) all the way through their 3D process and final render (below). Enjoy!

Projets - Sextans Application Web Groupe Robert Site web Jaclin Site Web Dota 2 – Unreleased Heroes Preview » Cyborgmatt's Blog Here’s a little tease before tonight’s tomorrow’s patch, a video of some of the unreleased heroes` abilities being used in game and some unreleased concept art as well. Unreleased Heroes Preview In the world of Dota 2 we’re aware of 18 different unreleased heroes that are currently being worked on. The development of a hero is a long process and takes several weeks of art, animation, effects work, hours of dialogue writing, recording and processing and then they have to be programmed into the game. This is exactly why we see so many different heroes in development.

Cinemagraphs Archives Page 3 of 33 Ann Street Studio Shooting the former editor of Vogue Paris, Carine Roitfeld, for her newest endeavour CR Fashion Book as she looks out over Manhattan, almost as if she is looking forward to taking over this city as she has done to Paris. In addition to being one of the most influential fashion editors, creating iconic imagery that defines who we are in life and where we are going, she is also glamorous and French and beautiful. When starting CR Fashion Book, she said: Canal Plus Film Making Flow Charts Canal+, the French television channel, is promoting its support for the film industry with a series of print advertisements featuring complicated flow charts. Four forms are presented: action, animation, horror and short film. “Shooting a film isn’t that simple.

illus 6 The Surreal Paintings of Vladimir Kush posted by Damian M. under Photography on Mar 21st, 2010 with 32 Comments 21 Mar 0 Share SimplicityCam 5e The Recordex Simplicity 5e HD Doc Cam sets a new standard in compact shooting performance. Weighing in at just 2.25 pounds and constructed of aluminum alloy the SimplicityCam 5e shoots images and video in stunning HD quality. 5MP HD Camera. The SimplicityCam 5e combines amazing optics with a 5MP CMOS camera sensor to give you outstanding professional imaging up to 2592 x 1944. Big Shooting Area. How To Animate in Krita - Tutorial for Beginners! In this Krita Animation Tutorial for Beginners, we will learn how to download Krita, how to draw in it, how to animate, and how to export your video so you can upload it to YouTube! —You’ll be starting your own animation in no time, even if you’ve never drawn before! Check out my Krita Animation Tutorial for Beginners here: How To Animate in Krita for Beginners – FREE ANIMATION SOFTWARE! Want to make your own cartoons? Krita lets you animate them for FREE!!

9 Best Free Animation Software for 2019 Animation has come a long way since the days of "Steamboat Willie," developing into a precise and scientific art. Just look at how Pixar has changed the animation game: With 1998’s “Toy Story,” the studio introduced the world to the first-ever computer-animated feature-length film. At the time, it was revolutionary. Before animation software, cartoons were created by hand, drawing or inking thousands of cells against various backgrounds in rapid sequence. Computer animation is cheaper, faster and allows animators for more flexibility.

Micehell Ferri on Pinterest Log in Home Categories There’s more to see... Come take a look at what else is here!