RED. From We Bought A Zoo. Flashlight. Die Dinosaurier / Visuelle Konzeption. Forget the Film, Watch the Titles - The Back-up Plan title sequence. Forget the Film, Watch the Titles - Rango title sequence. HENRY HOBSON ABOUT THE END CREDITS FOR RANGOPeople appreciate the energy and effort that was put into a handmade piece of work,and it starts to pay off...Amazingly, the end credit sequence for Rango was done in just a few weeks, yet it's a very accomplished and unique project that is founded on 'old school' analogue handiwork, such as intricate illustrations, woodcut art, and handdrawn typography, with a bit of Hendrix thrown in for good measure. 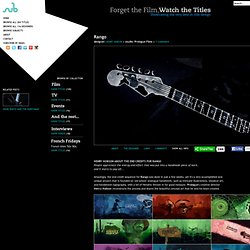 Prologue's creative director Henry Hobson reconstructs the process and shares the beautiful concept art that he and his team created. Forget the Film, Watch the Titles - The Teeth Of The Night title sequence. Les Dents de la Nuit (original French title) is a horror comedy around the inexhaustible theme of vampires. 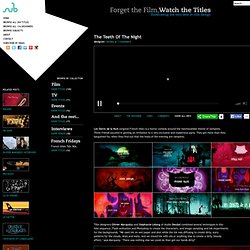 Three friends succeed in getting an invitation to a very exclusive and mysterious party. They get more than they bargained for, when they find out that the hosts of the evening are vampires. Title designers Olivier Marquézy and Stéphanie Lelong of studio Deubal combined several techniques in this title sequence, Flash animation and Photoshop to create the characters, and image sampling and ink experiments for the backgrounds. "We used ink on wet paper and shot while the ink was diffusing to create dirty, scary patterns for the clouds, skies and walls.

And we mixed ink with oils or anything else to create a dirty, bloody effect," says Marquezy. "The two directors both have a background in advertising and they had a lot of ideas, but those were not quite compatible with the time and budget we had," Marquezy explains. More about Deubal Full credits. Forget the Film, Watch the Titles - Kung Fu Panda title sequence. Forget the Film, Watch the Titles - Madagascar: Escape 2 Africa title sequence. In 2004, Jamie Caliri directed the beautiful animated end credits for Lemony Snicket's - A Series of Unfortunate Events. 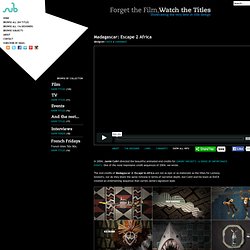 One of the most impressive credit sequences of 2004, we wrote. The end credits of Madagascar 2: Escape to Africa are not as epic or as elaborate as the titles for Lemony Snicket's, nor do they share the same richness in terms of narrative depth, but Caliri and his team at DUCK created an entertaining sequence that carries Jamie's signature style. ‪Ratatouille "End Credits"‬‏ ‪Kung Fu Panda 2 - End Credit Animation in Chinese Shadow Puppet Style‬‏ ‪Cloudy with a Chance of Meatballs ending theme‬‏

Illustration. Vegeterrible. 32 Extremely Original Retro Style Illustrations by Dan Page at DzineBlog. Learn how to earn $125 or more per hour as a freelancer - Click Here Looking for hosting?. 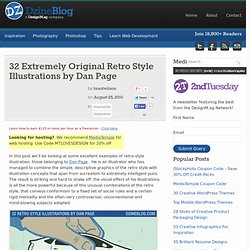 We recommend MediaTemple for web hosting. Use Code MTLOVESDESIGN for 20% off In this post we’ll be looking at some excellent examples of retro-style illustration: those belonging to Dan Page. He is an illustrator who has managed to combine the simple, descriptive graphics of the retro style with illustration concepts that span from surrealism to extremely intelligent puns. The concept behind each illustration is in fact essential to Dan Page. Dan Page is a very successful illustrator precisely because of this brilliant way of creating his drawings. The most beautiful thing about his illustrations resides in his sparkling, bright ideas and this is why, you shouldn’t miss this collection: it could be an immense source of inspiration for you! CFO Magazine – Time Extension Individual Investor – Paying Taxes Stable Steady Focus Concept Illustrations Canadian Business Grow – Ops Phoenix Magazine Cryogenics.

A Kiss From Tokyo - HD. Looks That Kill - HD. Evolution of mammals. The evolution of mammals has passed through many stages since the first appearance of their synapsid ancestors in the late Carboniferous period. 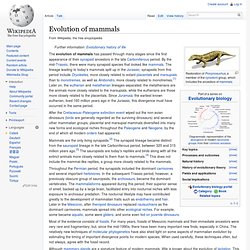