Animationish. Kick Off the School Year with an Art-Inspired Music Video! Visual arts and music go together just about as well as peanut butter and jelly.

The Egyptians and the ancient Greeks created images of people playing harps and flutes, while Renaissance and Baroque artists painted lutes. Modern artists have been equally motivated by music. Consider Picasso and the guitar or Stuart Davis and jazz. These artists were all influenced by music, but what happens when musicians are inspired by art? The following is a list of my all time favorite art-inspired music videos. 1. 70 Million by Hold Your Horses!

This band is having too much fun, as they transform their own bodies into famous works of art. 2. It took 30 people, 22 months and 288,000 jelly beans to create this incredible stopmotion animation video. 3. It’s easy to get lost in the story of this music video, directed by visual artists Shynola, but try not to lose sight of the time and effort that went into the making of this video. 4. This is not your momma’s perspective! 5. About Ian | Ian’s Articles. ANIMATION CHEFS. NFB Animation. The Kid Should See This: Animation. An Object at Rest: A stone’s adventure through time An Object at Rest is Seth Boyden's final thesis film at CalArts. 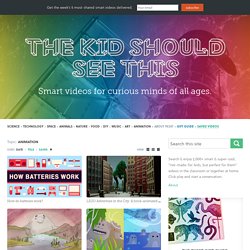 He writes: This year's story follows the life of a stone as he travels over the course of millions of years, facing nature's greatest obstacle: human... The science of static electricity – TED Ed What is static electricity? Why do we get a tiny spark when we've walked across a carpet and touched a doorknob? Sesame Street: What is Dance? What is Dance? The praxinoscope-style BusyBody Quick-Pose Animator Ten bendable, posable figures spin around the outside of a turntable. Scott Blake’s Hole Punch Flipbooks Do you have a hole punch around the house? Cubits (1978) by Al Jarnow From animator, artist, sculptor, and filmmaker Al Jarnow, enjoy this 1978 experimental animation classic filled with patterns, geometry, logic, and other ideas beyond animation: Cubits. 3D printed nail art animates with stop motion Cal Academy: How to Observe a Meteor Shower.

Don Levy: A cinematic journey through visual effects. The Phonotrope (formerly the Phonographantasmascope) Wooden zoetrope sculptures spin in the forest Spinning Daggers by Benjamin Ducroz, a set of seven 3D wooden zoetropes or kinetic sculptures made from 18 different instances of modulating sine and triangle waves. 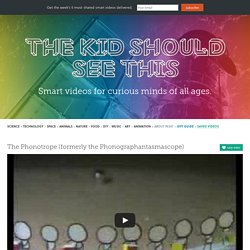 For this video, three of the zoetropes were filmed ... The praxinoscope-style BusyBody Quick-Pose Animator Ten bendable, posable figures spin around the outside of a turntable. At the center, a series of mirrors reflect their poses. Tops (1969) by Charles and Ray Eames Charles Eames was quoted to have said, "Toys are not really as innocent as they look. 3D-Printed “Blooming” Fibonacci Zoetrope Sculptures Animation is a trick of the eye, and we're often reminded of this when we get to see animation happen right in front of us. 3D-printed zoetrope sculptures by math and Fibonacci-inspired artist and designer John Edmark...

ExpeRimental: How to Make Balancing Sculptures Physics! Street performer Isaac Hou rides a Cyr wheel. Film: A pottery zoetrope animation? Go on then, it is Friday after all. Long before the days of the Nintendo Wii and Hug Me Elmo there was the zoetrope; a very cool old-school gadget which creates the illusion of motion from a series of images which you spin around rapidly on an axis. 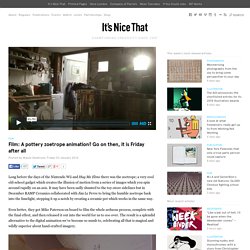 It may have been sadly shunted to the toy-store sidelines but in December RAMP Ceramics collaborated with Jim Le Fevre to bring the humble zoetrope back into the limelight, stepping it up a notch by creating a ceramic pot which works in the same way. Even better, they got Mike Paterson on board to film the whole arduous process, complete with the final effect, and then released it out into the world for us to coo over. The Guide To Sound Effects. I like to think of such sounds as having two general components: a ‘defining’ one, and an ‘impact’ one. 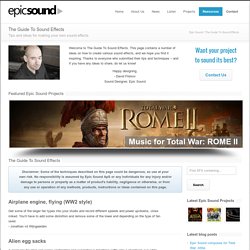 The defining one is what sounds up front and tells the listener what the sound is, especially if combined with picture. The impact one can be anything at all, designed only to pump up the sound to hyper-real. For defining sounds, simply record what things really are: For a face slap for example, record a real slap, hand clap, slap on thigh, etc. For a body kick, record a fist on chest thud, etc. For impact sounds, anything goes. 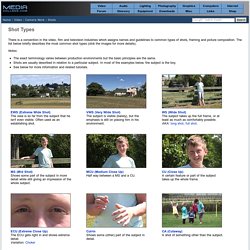 The list below briefly describes the most common shot types (click the images for more details). Notes: The exact terminology varies between production environments but the basic principles are the same. Shots are usually described in relation to a particular subject.