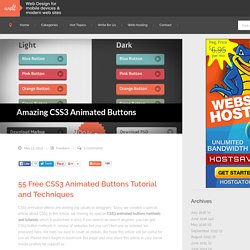 Today we created a special article about CSS3. In this article, we sharing 55 special CSS3 animated buttons methods and tutorials which is published in 2013. If you search on search engines, you can get CSS3 button methods in various of websites but you can’t find one as detailed we prepared here. We tried our best to cover all details. We hope this article will be useful for you all. Below there are buttons for various of purposes such as 3D buttons, social media buttons, radio buttons, responsive buttons and tab menues, navigation menues and typography elements and more. You can learn how to create this amazing buttons by links below or directly download into your computer and start creating your own styles. On/Off Button Get this button Pure CSS Social Media Icons. Using jQuery to Detect When CSS3 Animations and Transitions End. It seems like only a couple of years ago that almost every animation on a web page was done either by means of Flash or a JavaScript library like jQuery. 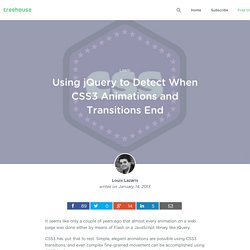 CSS3 has put that to rest. Simple, elegant animations are possible using CSS3 transitions, and even complex fine-grained movement can be accomplished using CSS3 keyframe animations. And now that every major modern browser supports both transitions and keyframe animations, they are a very real possibility on every new project we create. In this post, I’ll discuss how you can include callback-like behaviour when using CSS3 transitions and animations, and thus keep your animation effects separate from your jQuery logic. Separating Logic from Effect How do we apply a principle like “separation of concerns” when implementing both JavaScript and CSS3? In the past, when CSS3 animations weren’t an option, we would see jQuery code that resembled this: A pretty bare-bones example, but it demonstrates the need for separation.

Summary Further Reading. Understanding CSS Transitions And Class Timing. UPDATE: @Ron, in the comments, pointed out that this demo does not work as expected in Chrome. 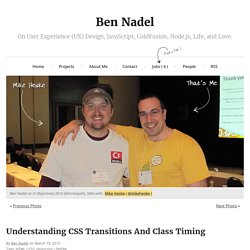 Apparently Firefox (my dev environment of choice) and Chrome handle this case somewhat differently. I've only just started to use CSS transitions; but, I already love them. They seem like a great way to augment the behavior of your application user interfaces (UI) in a mannor that is inexpensive, easy to implement, and safe for browsers that don't yet support cutting-edge CSS standards.

One thing that keeps tripping me up, however, is timing. And I don't mean the duration of a transition - I mean when does the transition actually take affect? Most of the transitions that I've used in CSS involve the toggling of some property. In the following example, I have an fixed-position box. The demo contains four ways to change the CSS properties on the fixed position box: Each of these has a different outcome, as you can see in the video: To overcome this timing dilemma, we have two options:

Carrd - Simple, free, fully responsive one-page sites for pretty much anything. Giving Animations Life — Tictail — Behind the Scenes. Now that we have the fly-in motion in place, let’s think about other ways to improve the animation even further. 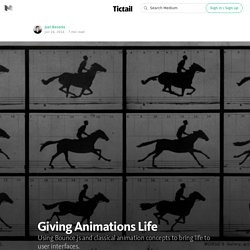 A good source of inspiration is animated cartoons, and the concepts and tricks that animators use to create them. Disney’s Twelve Basic Principles of Animation is a set of principles for producing more realistic animations based on the work of leading Disney animators during the golden age of animation. The principles were introduced in The Illusion of Life: Disney Animation, which has by some been referred to as the Bible of animation. Let’s examine them and see how we can apply some of the principles to our signup form here. Fourth Iteration — Follow Through and Overlapping Action Follow Through and Overlapping Action are two related techniques that help give the impression that animated characters or objects follow the laws of physics. In the animation above, you’ll see a couple of frames of the button moving independently after the form has stopped. THE ILLUSION OF LIFE. Cubic-bezier(.17,.67,.83,.67) ✿ cubic-bezier.com.