Pencil2D – opensource animation software. AMB Animation Academy. Flash Animation Online Course. Test 08 | Model Pack Clean-up | > Sample 1 > Sample 2 > Tips on Inking Test 09 | Headturn | > The Anatomy of a Head TurnSample: Tutorial on Movement and Spacing: Slow-in / Slow-out As an action starts, you may have more drawings near the starting pose, one or two in the middle, and more drawings near the next pose. 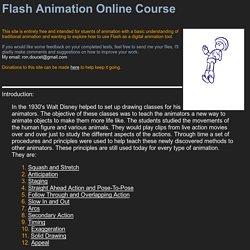 Fewer drawings make the action faster and more drawings make the action slower. Slow-ins and slow-outs soften the action, making it more life-like. Timing, or the speed of an action, is an important principle because it gives meaning to movement - the speed of an action defines how well the idea behind the action will read to an audience. More than any other principle, timing defines the weight of an object. Timing can also contribute greatly to the feeling of size or scale of an object or character. Flash version: Charts can be made in halves or thirds, or animated on 1s or 2s. The relationship between timing and spacing is the very core of all animation. Notes. Trois petits points. March 2014. Beginning animation students are always so worried about making the drawings look good and making sure that all the details are there to see. 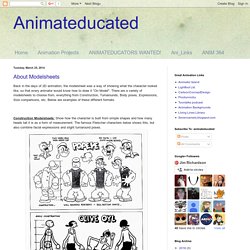 Their animation drawings may be well drawn, however they move very stiffly and without any life. This is because they never rough out their animation, but go straight into Clean Up drawings first. When you first animate a scene, you need to rough out a series of drawings to figure out the action, the staging and other elements that the scene requires. These should be done as small quick, rough drawings known as Thumbnails. These are rough thoughts like quick sketches in figure drawing and allow you to see the various shots or actions as well as how everything fits together.These rough drawings tell your story which you can enlarge using a scanner or xerox machine to fit in a field size you like to work in.

In "Drawing with the Right side of the Brain" by Betty Edwards explains how to use the right side your brain when drawing. Cartoon Concept Design: Batman The Animated Series Model Sheets. Animateducated: March 2014. Jonathan Djob Nkondo - Compilation. Elia. FLOATING IN MY MIND. Out of Sight (敲敲) Derailed. KOISHI. Spungella. Home. Interview: Ed Hooks Acting for Animators FMX 2014. The Monthly Character Animation Competition. Tips on Acting for Actors, Animators and Directors : CG Filmmaking, Drawing, Modeling, Animation, Texturing, Lighting & Rendering. Acting for Animators A Weekend Workshop by Ed Hooks 1) Always remember where the character is coming from. 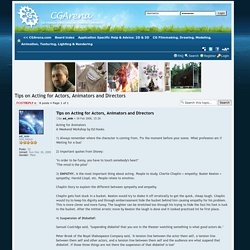 Fix the moment before your scene. What profession am I? Waiting for a bus? 2) Important quotes from Disney: "In order to be funny, you have to touch somebody's heart" "The mind is the pilot" 3) EMPATHY, is the most important thing about acting. Chaplin Story to explain the different between sympathy and empathy. Chaplin gets foot stuck in a bucket. 4) Suspension of Disbelief: Samuel Coolridge said, "Suspending disbelief that you are in the theater watching something is what good actors do. " Peter Brook of the Royal Shakespeare Company said, "A tension line between the actor them self, a tension line between them self and other actors, and a tension line between them self and the audience are what suspend that disbelief. 5) Conflict: There are 3 kinds of conflict, conflict with self, with situation and with other characters. 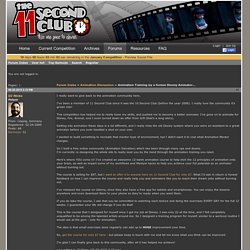 I've been a member of 11 Second Club since it was the 10 Second Club (before the year 2000). I really love the community it's grown into! This competition has helped me to really hone my skills, and pushed me to become a better animator. Become a Professional Character Animator. When I was 12 years old, my parents took me on “The Magic of Disney Animation" tour at Walt Disney World, where I saw REAL Disney Animators creating real Disney Animation. 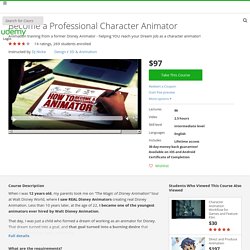 Less than 10 years later, at the age of 22, I became one of the youngest animators ever hired by Walt Disney Animation. That day, I was just a child who formed a dream of working as an animator for Disney. That dream turned into a goal, and that goal turned into a burning desire that wouldn't let me stop until I achieved it. Learn Character Animation. Guardian Animation Training Program.

You’ve heard people say “use it or lose it” but did you realize that also applies to your animation? 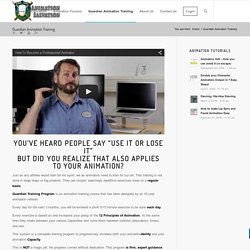 Just as any athlete would train for his sport, we as animators need to train for our art. This training is not done in large leaps or big projects. They are simple, seemingly repetitive exercises done on a regular basis. How To Animate In The Zone. Animation School- AnimSchool: Weight Shifts and Center of Gravity. Legs Jump Blocking - Part1. Animation School - AnimSchool: Tom Bancroft Webcast. Keith Lango Animation: Animation Tutorials. Disposición, Animación y Personaje De Animación. Animator: 井上俊之 Toshiyuki Inoue 作画. KORRA NATION. Turtle-duck Date NightThis is my piece for the upcoming The Legend of Korra / Avatar: The Last Airbender Tribute Exhibition at Gallery Nucleus, opening this Saturday, March 7th, 6:00pm to 10:00pm. 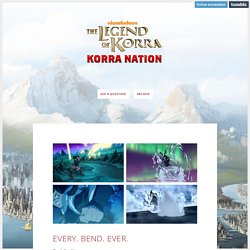 Mike and I will be there doing a signing for the first half of the reception (there are a limited number of spots in the signing line, but I’m not sure how they are working that), and hanging out for the rest. I think there will be a raffle, and plenty of cool stuff to purchase. A bunch of the crew members from the production will be there too (hopefully including some ATLA folks), so it is going to be a fun family reunion for us. I can’t wait to see all of the incredible artwork.As for this piece, I used and modified Emily Tetri’s production painting of Harmony Tower (designed by Lee Jung-Su). Otherwise, I drew and painted the rest of it. Living Lines Library: Ernest et Célestine (2012) - Character Design. Disposición, Animación y Personaje De Animación. Artbooksnat: Studio Ghibli animation layouts from The Wind Rises (風立ちぬ), illustrated by When Marnie Was There director Hiromasa Yonebayashi (米林宏昌).… 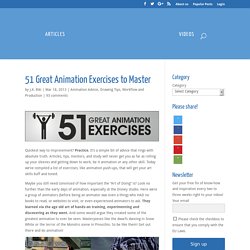 Practice. It’s a simple bit of advice that rings with absolute truth. Articles, tips, mentors, and study will never get you as far as rolling up your sleeves and getting down to work, be it animation or any other skill. Drawing Lessons. In 1988, an extraordinary thing happened in the world of animation. 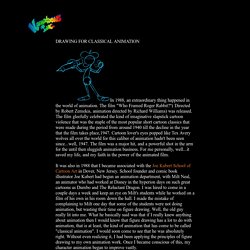 The film "Who Framed Roger Rabbit? "( Directed by Robert Zemekis, animation directed by Richard Williams) was released. The film gleefully celebrated the kind of imaginative slapstick cartoon violence that was the staple of the most popular short cartoon classics that were made during the period from around 1940 till the decline in the year that the film takes place,1947. Showthread. Really, the best way to practice animation is to animate. 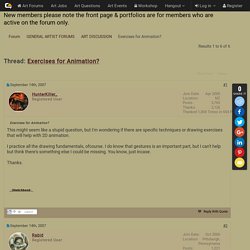 Sounds like a silly answer, but hear me out.Animation is fundamentally Keyframes and Timing. Gesture will help you when your figuring out natural positions for Keyframing, but, there really isn't a non-animation exercise that helps with Timing. You really need a sequence of images to play with Timing, there's just no getting around it.If your really keen on getting some Animation training away from your desk, aside from Gesture, you can people-watch. You have enough studies of Walk Cycles, Picking up Heavy Objects, and other general movement in the Animator's Survival Kit. But with people watching you can focus on the non-purposeful movements people make that can lend believability to your character.

Basic animation exercises. Animation for Beginners (Where do I start?) One of the most asked question I get on a daily basis is “I want to be an animator/do animation. Where do I start?” Instead of directing you to our Making an Animated Movie series, our awesome beginners page, or even our YouTube channel, I decided to write this guide to cover (almost) everything you might need to know when trying to get into the animation industry. In this post I’ll cover some of the basic concepts and options for people who want to make animation, but are overwhelmed with the task.