How to Make a DIY Camera Stand. Tripods can shoot just about every angle but one: straight down. 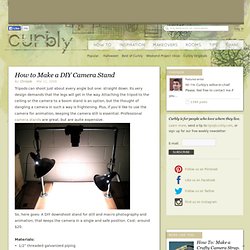 Its very design demands that the legs will get in the way. Attaching the tripod to the ceiling or the camera to a boom stand is an option, but the thought of dangling a camera in such a way is frightening. Plus, if you’d like to use the camera for animation, keeping the camera still is essential. Professional camera stands are great, but are quite expensive. So, here goes: A DIY downshoot stand for still and macro photography and animation, that keeps the camera in a single and safe position. The Multiplane Downshooter (Non-Traditional Animation Techniques) Part 2. Clay, Sand, and Three-Dimensional Objects Downshooting refers only to the shooting setup. 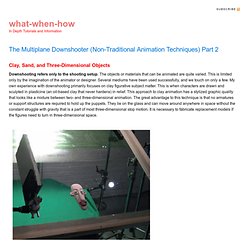 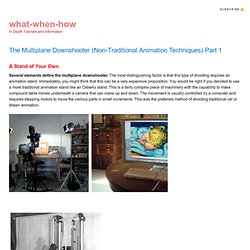 The most distinguishing factor is that this type of shooting requires an animation stand. Immediately, you might think that this can be a very expensive proposition. You would be right if you decided to use a more traditional animation stand like an Oxberry stand. This is a fairly complex piece of machinery with the capability to make compound table moves underneath a camera that can crane up and down. FIG 7.1 A traditional Oxberry animation stand.

Most independent downshooting artists make custom stands, which can be as simple as a mounted piece of glass placed in front of a camera on a tripod. The table that holds the objects, cutouts, or various materials to be animated can be a hard flat surface of wood or heavy solid plastic, but the great majority of shooting surfaces on downshooters are made of glass. Cut-out Animation Awesomeness. I’m preparing to do some animation for my film project, and am determined to improve my DIY animation skills. 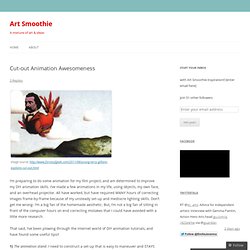 I’ve made a few animations in my life, using objects, my own face, and an overhead projector. All have worked, but have required MANY hours of correcting images frame-by-frame because of my unsteady set-up and mediocre lighting skills. Don’t get me wrong- I’m a big fan of the homemade aesthetic. But, I’m not a big fan of sitting in front of the computer hours on end correcting mistakes that I could have avoided with a little more research.

That said, I’ve been plowing through the internet world of DIY animation tutorials, and have found some useful tips!! Cut out animation - Part 1. Paper Cut-Out Stop Motion Animation Effect. In this tutorial we'll be going through the steps used to create a stop-frame animated paper cut-out effect that appeared in the Mystery Jets music video that I directed a few years back. 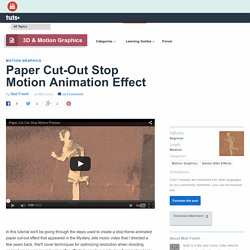 We'll cover techniques for optimizing resolution when shooting against green screen and using after effects to create a quirky low-fi animation look. To begin with, you will need to film your action against a green screen. For the original video, we used a large green screen studio with a treadmill for the actor to run on at a constant speed. For the purposes of this tutorial we will create a low budget version of this (running_loop.mov supplied), which I think is equally as effective. Securely pin up a large sheet of bright green paper or fabric and allow it to curve onto the floor so that the actor can stand on it. Light the green screen with three lights. Don't worry too much about lighting the actor as the effect is essentially a silhouette anyway. Next, we need to screw up some paper and scan it in. 6 Stop Motion Beginner Mistakes (and how to avoid them) Don't be a n00b! 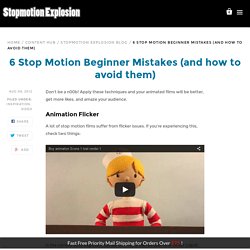 Apply these techniques and your animated films will be better, get more likes, and amaze your audience. Animation Flicker A lot of stop motion films suffer from flicker issues. If you're experiencing this, check two things: Canon EOS 1000D / Canon EOS Digital Rebel XS / Canon EOS Kiss F. Reducing flicker for stop-motion animation and time-lapse photography. [Today’s post is by Benjamin Markus, who is working with us as an intern this summer.] 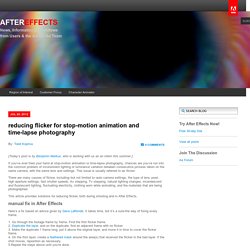 If you’ve ever tried your hand at stop-motion animation or time-lapse photography, chances are you’ve run into the common problem of inconsistent lighting or luminance variation between consecutive pictures taken on the same camera, with the same lens and settings. This issue is usually referred to as flicker. There are many causes of flicker, including–but not limited to–auto camera settings, the type of lens used, high aperture settings, fast shutter speeds, Av stepping, Tv stepping, natural lighting changes, incandescent and fluorescent lighting, fluctuating electricity, clothing worn while animating, and the materials that are being photographed. This article provides solutions for reducing flicker, both during shooting and in After Effects. manual fix in After Effects Here’s a fix based on advice given by Dave LaRonde. 1.

How to Make Paper People. Lightworks. Terry Gilliam's Do It Yourself Animation Show.