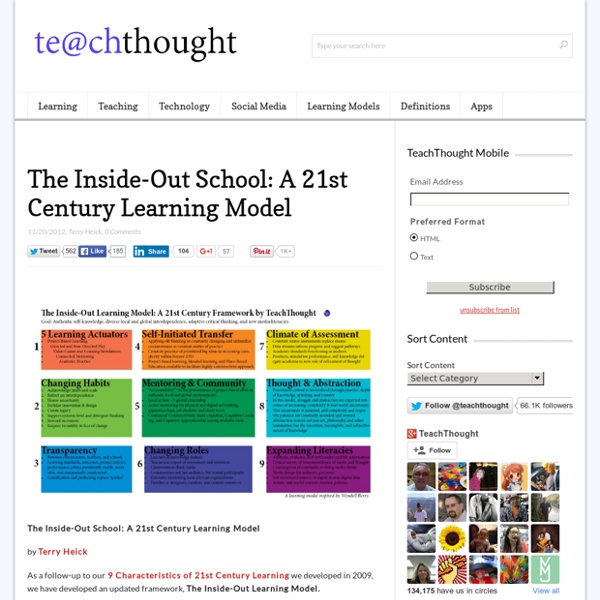 The Inside-Out School: A 21st Century Learning Model by Terry Heick As a follow-up to our 9 Characteristics of 21st Century Learning we developed in 2009, we have developed an updated framework, The Inside-Out Learning Model. The goal of the model is simple enough–not pure academic proficiency, but instead authentic self-knowledge, diverse local and global interdependence, adaptive critical thinking, and adaptive media literacy. By design this model emphasizes the role of play, diverse digital and physical media, and a designed interdependence between communities and schools. The attempted personalization of learning occurs through new actuators and new notions of local and global citizenship. Here, families, business leaders, humanities-based organizations, neighbors, mentors, higher-education institutions, all converging to witness, revere, respond to, and support the learning of its own community members. The 9 Domains Of the Inside-Out Learning Model 1. 2. 3. 4. 5. 6. 7. 8. 9.

21st Century Educator Listen to the two songs linked below, and ask yourself, is this the message we should be sending our children? After the horrible rape case in the now infamous town of Steubenville, I have been thinking about what could possibly have made this act seem justified by the boys who committed it, and although I do not think we can lay all of the blame on popular media, as it is a reflection of our culture, some of the blame must lie there. I listened to this song, at the request of my son, and I was quickly horrified.

Changing What We Teach Changing What We Teach: Shifting From A Curriculum Of Insecurity To A Curriculum Of Wisdom by Terry Heick Increasingly, the idea of computer coding is being pushed to the forefront of “things.” In movies, on the news, and other digital avatars of ourselves, coders are increasingly here. In Hollywood, computer coders are characterized as aloof and spectacle geniuses in green army jackets who solve (narrative) problems in a kind of deus ex machina fashion. Hack the mainframe, change the school grades, save prom, etc.

9 Characteristics Of 21st Century Learning The label of “21st Century learning” is vague, and is an idea that we here at TeachThought like to take a swing at as often as possible, including: –weighing the magic of technology with its incredible cost and complexity –underscoring the potential for well thought-out instructional design –considering the considerable potential of social media platforms against its apparent divergence from academic learning Some educators seek out the ideal of a 21st century learning environment constantly, while others prefer that we lose the phrase altogether, insisting that learning hasn’t changed, and good learning looks the same whether it’s the 12th or 21st century. At TeachThought, we tend towards the tech-infused model, but do spend time exploring the limits and challenges of technology, the impact of rapid technology change, and carefully considering important questions before diving in head-first.

Is Google Making Us Stupid? Illustration by Guy Billout "Dave, stop. Stop, will you? Stop, Dave. Will you stop, Dave?” So the supercomputer HAL pleads with the implacable astronaut Dave Bowman in a famous and weirdly poignant scene toward the end of Stanley Kubrick’s 2001: A Space Odyssey. PSA: Please Stop Saying '21st Century Education' If you ever find yourself sitting in a meeting—or listening to a politician's speech—about education reform, it's pretty much guaranteed that you'll hear mention of how schools need to ensure kids are "21st century learners," who are acquiring "21st century skills," in a "21st century classroom." But in the thirteenth year of the 21st century, what does any of this "21st century education" talk mean—and is it even happening? Last September, educator and author Grant Lichtman set out on a quest to discover the answer.

50 Alternatives To Lecturing 50 Alternatives To Lecturing by TeachThought Staff Ed note: This post is promoted by SEU’S online masters in education programs. SEU simply asked us to write about how learning is changing and the updated kinds of things teachers need to know, and to let you know about their program. So here we are. As teachers, when we lecture, we have the best of intentions.

7 Ed Tech Trends to Watch in 2014 Technology trends in both higher ed and K-12 classrooms continue to evolve and transform traditional learning environments. New learning analytics, mobile devices, open online learning, and 3D printers are some of the many Educational technology trends to be on the lookout for in 2014. Here’s a detailed discussion. 1) 3D Printing Documentary 'Print the Legend' Goes Inside the World of 3D Printing The genesis of and challenges to the 3D-printing revolution are subjects that take center stage in a new documentary called Print the Legend. From directors Clay Tweel and Luis Lopez (Freakonomics), the film sets out to act as a "'time capsule' of a nascent industry," Tweel told Mashable. "The result is both a look inside a compelling new technology, and hopefully, a story about the challenges of growing any type of business, and facing the moral dilemmas our marketplace presents."

Math, PBL and 21st Century Learning for All Students Considering project-based learning as a way to teach 21st century competencies? Or perhaps you have already used PBL in your schools and want support for your discussions with administrators, parents or board members? In either case, it might be helpful to know about the strong research evidence that PBL, when supported by good professional development, can in turn support the teaching and learning of 21st century skills significantly better than more traditional alternatives. edutopia In the education world, the term student-centered classroom is one we hear a lot. And many educators would agree that when it comes to 21st-century learning, having a student-centered classroom is certainly a best practice. Whether you instruct first grade or university students, take some time to think about where you are with creating a learning space where your students have ample voice, engage frequently with each other, and are given opportunities to make choices. Guiding Questions

Top 10 emerging technologies for 2014 Technology has become perhaps the greatest agent of change in the modern world. While never without risk, positive technological breakthroughs promise innovative solutions to the most pressing global challenges of our time, from resource scarcity to global environmental change. However, a lack of appropriate investment, outdated regulatory frameworks and gaps in public understanding prevent many promising technologies from achieving their potential. The World Economic Forum’s Global Agenda Council on Emerging Technologies identifies recent key trends in technological change in its annual list of Top 10 Emerging Technologies. By highlighting the most important technological breakthroughs, the Council aims to raise awareness of their potential and contribute to closing gaps in investment, regulation and public understanding. For 2014, the Council identified ten new technologies that could reshape our society in the future.