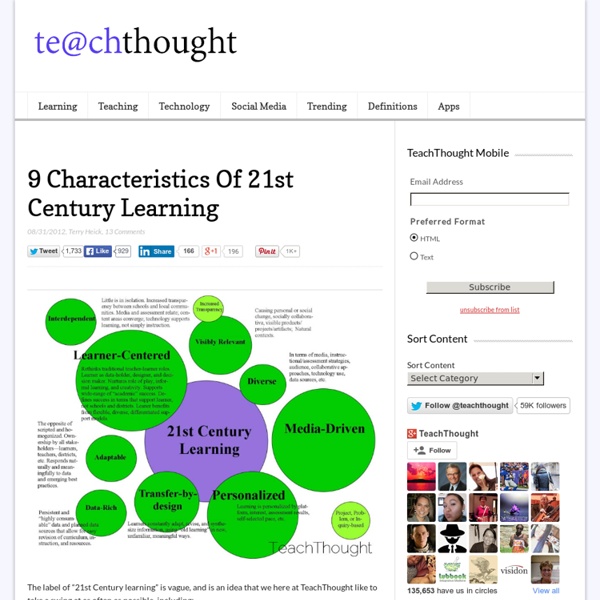 The label of “21st Century learning” is vague, and is an idea that we here at TeachThought like to take a swing at as often as possible, including: –weighing the magic of technology with its incredible cost and complexity –underscoring the potential for well thought-out instructional design –considering the considerable potential of social media platforms against its apparent divergence from academic learning Some educators seek out the ideal of a 21st century learning environment constantly, while others prefer that we lose the phrase altogether, insisting that learning hasn’t changed, and good learning looks the same whether it’s the 12th or 21st century. At TeachThought, we tend towards the tech-infused model, but do spend time exploring the limits and challenges of technology, the impact of rapid technology change, and carefully considering important questions before diving in head-first. The size of the circles on the map are intended to convey priority. 1. 2. 3. 4. 5. 6. 7. 8. 9.

UCISA 2014 Survey of Digital capabilities: embedding and support Introduction The UCISA User Skills Group are pleased to launch the first of what we plan to be a biennial survey of the UK HE sector, focusing on what have variously been called digital capabilities, digital literacies or digital competencies. This survey, and those to come, will start to describe how institutions are developing people to perform efficiently and effectively in a digital environment. It will complement the technology enhanced learning (TEL) survey that the UCISA Academic Skills Group runs, but will look at broader digital capabilities instead of TEL software and approaches.

The Connected Learner in a PLE We are all learners. We are connected to each other and innovative learning experiences that we never thought were possible before. It doesn't matter how old you are, where you live, and what you want to learn, you can connect to people, resources, and courses so you, the learner, can learn what you want when you want to. This means what we call "school" is different. Teachers and learners are different. 6 Channels Of 21st Century Learning 6 Channels Of 21st Century Learning This post has been updated from a 2013 post by Terry Heick At TeachThought, we constantly wrestle with two big questions: How do people learn, and how can they do it better in a constantly evolving context? In pursuit, the theme of “21st century learning” often surfaces, a popular label that, while perhaps cliche, still seems to be necessary as we iterate learning models, fold in digital media resources, and incorporate constantly changing technology to an already chaotic event (i.e., learning). This has produced our 9 Characteristics of 21st Century Learning, a kind of overview we created in 2009, and our Inside-Out School model that is meant to be a kind of bridge between current school design and what’s possible moving forward. Learning Channels

PBL – the best teaching method in the 21st century instruction Let me start this article with what Obama says in a speech at the Center for American Progress : “ Let’s be clear — we are failing too many of our children. We’re sending them out into a 21st century economy by sending them through the doors of 20th century schools.” This is a true statement issued from the lips of a political person rather than an educator. There is a profound disconnect between what students are being taught and what the actual world is demanding of them as adults.

The 50 Best Education Twitter Hashtags 50 Important Education Twitter Hashtags–With Meeting Times! Note: We are updating this list that is now going on two years old. Please suggest any revisions, additions, etc., in the comments below and we’ll make the changes. Twitter chats are a great resource for learning and networking, allowing academics from all over the world to come together on a regular basis to talk about what’s important in education. They’re also ideal for gaining authority and visibility in your field. Better yet, they’re happening all the time.

Is Google Making Us Stupid? Illustration by Guy Billout "Dave, stop. Stop, will you? Stop, Dave. Reimagining learning for a post-digital world (part 1) – Solutions not problems Over the last few years I have made the case for a substantive and meaningful debate about redefining pedagogy and reimagining teaching and learning firstly for a digital age and more recently for what many are calling the post-digital world. The logical impossibility of Status Quo: Six disconnects that demand a digital pedagogy (or at least a good debate about it) ‘I am going to blow the whole thing to kingdom come’: In praise of discontinuity within a digital pedagogy Shit or get off the pot: Why are we still talking about the seismic impacts technology will have on higher education? But why do we need to debate or design a new pedagogical approach for our modern institutions? There are now more university students and graduates than ever before.

Why Questions Are More Important Than Answers Why Questions Are More Important Than Answers by Terry Heick Clocks and old watches are miracles. If you’ve ever taken one apart and had a look at the intricate gears with their jutting teeth reaching out with just the right math to tick in rhythm with the pulse of the universe, you’ll see that whatever mind conjured the thing and all its parts is mad. Imagine the dogged pursuit of a proper clock-maker, day after day bound up in design and measurement and function and orderly thinking, forcing exactitude on little bits of metal that never asked for it. And then finally getting it right–so many decisions and matters of design suddenly set the clock off ticking forever. Teacher - 5 Principles for the Teacher of Adults The teacher of adults has a different job from the one who teaches children. If you're teaching adult students, for the best results it's important to understand and practice five principles espoused by Malcolm Knowles, a pioneer in the study of adult learning. He observed that adults learn best when: They understand why something is important to know or do. They have the freedom to learn in their own way.

Pretty pictures: Can images stop data overload? 16 April 2012Last updated at 19:01 ET By Fiona Graham Technology of business reporter, BBC News Brain scan: Research suggests that one way to avoid being overloaded by data is by presenting it visually rather than text or numbers Sitting at your desk in the middle of the day, yet another email notification pops up in the corner of the screen, covering the figures you're trying to digest in the complicated spreadsheet in front of you.