SANAA Unveils Plans for New Downtown Arts & Design Campus in Jerusalem. Today, SANAA (Sejima & Nishizawa and Associates) unveiled plans for a 400,000 square-foot building in Jerusalem that will form a new, interdisciplinary downtown campus for the Bezalel Academy of Art and Design. 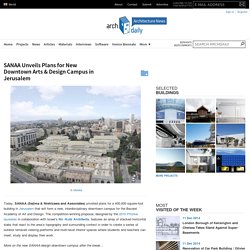 The competition-winning proposal, designed by the 2010 Pritzker laureates in collaboration with Israel’s Nir -Kutz Architects, features an array of stacked horizontal slabs that react to the area’s topography and surrounding context in order to create a series of outdoor terraced viewing platforms and multi-level interior spaces where students and teachers can meet, study and display their work. More on the new SANAA-design downtown campus after the break… Breaking tradition, the new school will encourage co-creation by consolidating its eight departments under one roof. Key programs include classrooms, studios, offices, two auditoriums, an operational area and various workshops. Bezalel’s downtown campus is scheduled for completion in 2017. 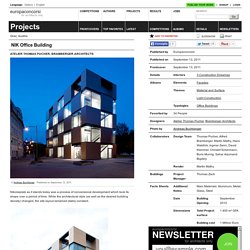 Published on September 13, 2011. Nikolaiplatz as it stands today was a process of conversional development which took its shape over a period of time. While the architectural style (as well as the desired building density) changed, the site layout remained stably constant. Our building stands on a property, which was initially a boathouse at the river` Mur´ (back then an unregulated river course ) four centuries ago. Later a doubled story storage shed was built and even later -in the 80’s the entire area was rebuilt to an underground parking. Sean Godsell Architects — Peninsula House. © Earl Carter . 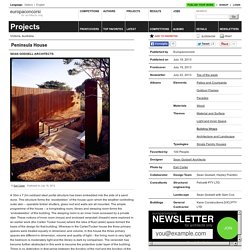 Published on July 19, 2013. A 30m x 7.2m oxidized steel portal structure has been embedded into the side of a sand dune. This structure forms the ‘exoskeleton’ of the house upon which the weather controlling outer skin – operable timber shutters, glass roof and walls are all mounted. Andrade Morettin Arquitetos Associados — BOX 298. © Nelson Kon. 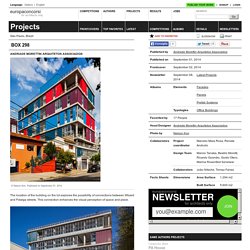 Published on September 01, 2014. The location of the building on the lot explores the possibility of connections between Wisard and Fidalga streets. This connection enhances the visual perception of space and place. Thus we create a continuous path that begins on the promenade and leads to a large, triple height open hall with wide views. School of Music and Arts / LTFB Studio. Architects: LTFB Studio Location: Bucharest, Romania Architects In Charge: Lucian Luta, Liviu Fabian Project Manager: S.C. 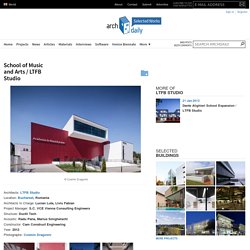 VCE Vienna Consulting Engineers Structure: Ductil Tech Acoustic: Radu Pana, Marius Smighelschi Constructor: Cam Construct Engineering Year: 2012 Photographs: Cosmin Dragomir The idea of a school of music and arts in Bucharest came from the need to gather all the teachers and gifted children from the district and from other areas in a single dedicated place in order to study and communicate. Until now, children have studied in improvised places, in old schools that haven’t been built in accordance with the technical needs of these disciplines. School Of Arts In Canterbury / HawkinsBrown. Architects: Hawkins\Brown Location: University of Kent, Canterbury, England Project area: 2,500 sqm Project year: 2006 – 2009 Photographs: Tim Crocker, Daniel Clements. 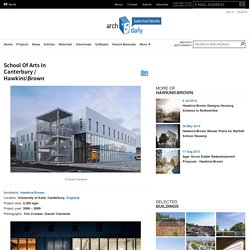 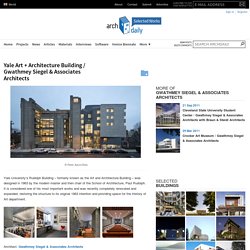 It is considered one of his most important works and was recently completely renovated and expanded, restoring the structure to its original 1963 intention and providing space for the History of Art department. The 114,000 sqf Brutalist building, which is constructed of cast-in-place concrete, has a total of 37 different levels on nine floors, two below grade, and is a cornerstone of Yale’s vibrant arts campus.

As a result of a 1996 planning study, Yale University decided to undertake the exterior and interior renovation of the structure along with the addition of a seven-story History of Art Building that allows for an expanded Art and Architecture Library, classrooms, seminar rooms, lecture halls, faculty offices, lounge, and public café. McGee Art Pavilion / ikon.5 architects (8) (206369) School Of The Arts / WOHA (217505) Flashback: Academy of Art & Architecture / Wiel Arets Architects.

Flashback: One of Archdaily’s goals is to bring you up to date information about projects that are being designed and constructed around the world. 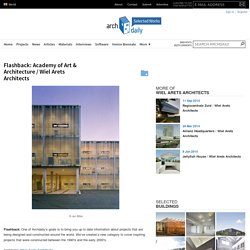 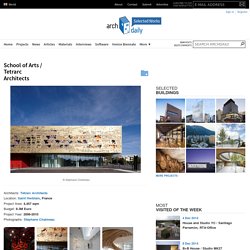 The connection between these two horizontal planes is clearly the highlight of the interior. In an almost amoeba like form, the stairs transport you from the lobby to the exhibition space above. Against a white and glass canvas the balanced swirl of color adds just enough interest for a unique entrance space. The lobby space houses ticketing booths, lounge, and an area for evening of artistic representation. Coulon & Ass. — Library in Anzin. 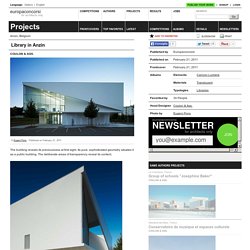 Jarmund/vigsnæs Architects — OSLO SCHOOL OF ARCHITECTURE. Henning Larsen Architects — Bildmuseet at Konstnärligt Campus. © Åke E:son Lindman . Published on December 10, 2012. The Art Museum, Bildmuseet, at Umeå University is situated at the new Arts Campus by the Umeälven river. The campus also comprises the Academy of Fine Arts, the Institute of Design and the new School of Architecture. The consolidation of artistic institutes and exhibition facilities is based on a close collaboration between various companies with a view to allow art, design and architecture to benefit from one another.

Umeå’s position as a centre of art and education is strenghtened with a new silhouette by the river. In its previous facilities, the museum has displayed international contemporary art and classic art-historical exhibitions side by side since 1981. The tower comprises three exhibition halls placed upon each other – with inserted floor plans featuring the auditorium, children’s workshops and administration. Steven Holl Architects — Seona Reid Building, Glasgow School of Art. © Iwan Baan . Published on March 17, 2014. See more photos by Iwan Baan The Seona Reid Building is in complementary contrast to Charles Rennie Mackintosh’s 1909 Glasgow School of Art – forging a symbiotic relation in which each structure heightens the integral qualities of the other.

A thin translucent materiality in considered contrast to the masonry of the Mackintosh building – volumes of light which express the school’s activity in the urban fabric embodying a forward-looking life for the arts. This project’s unique interior and exterior forces on the design are the catalysts for creating a new 21st century model for the art school.