How to Extract DNA from Anything Living 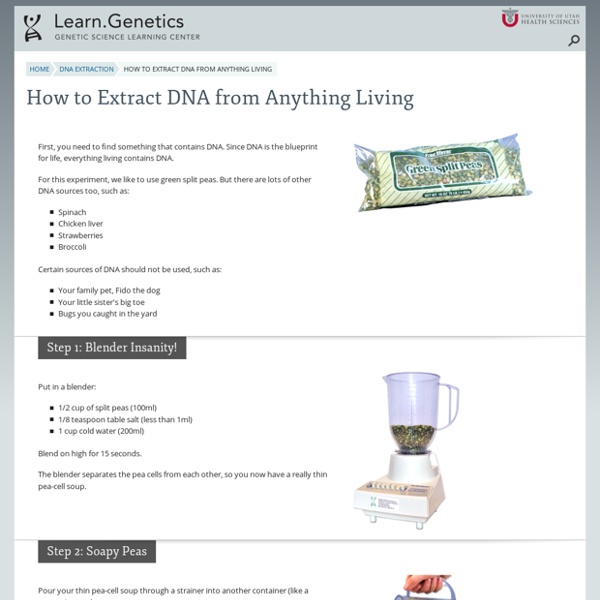 First, you need to find something that contains DNA. Since DNA is the blueprint for life, everything living contains DNA. For this experiment, we like to use green split peas. But there are lots of other DNA sources too, such as: Spinach Chicken liver Strawberries Broccoli Certain sources of DNA should not be used, such as: Your family pet, Fido the dog Your little sister's big toe Bugs you caught in the yard Step 1: Blender Insanity! Put in a blender: 1/2 cup of split peas (100ml) 1/8 teaspoon table salt (less than 1ml) 1 cup cold water (200ml) Blend on high for 15 seconds. The blender separates the pea cells from each other, so you now have a really thin pea-cell soup. Step 2: Soapy Peas Pour your thin pea-cell soup through a strainer into another container (like a measuring cup). Add 2 tablespoons liquid detergent (about 30ml) and swirl to mix. Let the mixture sit for 5-10 minutes. Pour the mixture into test tubes or other small glass containers, each about 1/3 full. Why am I adding detergent?

If you know someone who doesn’t believe in evolution, show them this video – DeadState Share Tweet Email How to Detect Lies - body language, reactions, speech patterns Interesting Info -> Lying Index -> How to Detect Lies Become a Human Lie Detector (Part 1) Warning: sometimes ignorance is bliss. After gaining this knowledge, you may be hurt when it is obvious that someone is lying to you. How to Build a Robot Tutorial - Society of Robots Introduction to Gears No good robot can ever be built without gears. As such, a good understanding of how gears affect parameters such as torque and velocity are very important. In this tutorial I will first talk about the basics of gears, how to use them properly along with simple equations, and then I will go into specific types of gears.

Understanding Evolution The bacteria that changed the world - May, 2017 The make-up of Earth's atmosphere, once the domain of Earth science textbooks, has become an increasingly "hot" news topic in recent decades, as we struggle to curb global warming by limiting the carbon dioxide that human activity produces. While the changes that humanity has wrought on the planet are dramatic, this isn’t the first time that one species has changed Earth’s atmosphere. Three billion years ago, there was no free oxygen in the atmosphere at all. Life was anaerobic, meaning that it did not need oxygen to live and grow.

40+ Tutorials for Working with Wacom Tablets Wacom tablets allow graphic designers to extend their abilities. If you’re like me and you’re interested in learning more about working with Wacom tablets, there are plenty of tutorials available. This post features more than 40 such tutorials, including a number of video tutorials. Some deal with the basics of Wacom tablets and getting them setup correctly, while others demonstrate more advanced usage. Additionally, some of the tutorials could be completed without a tablet, but the author uses one for at least portions of the tutorial. Teaching Harry Potter The Harry Potter books remain a student favorite (more than 400 million copies of the seven books in the Harry Potter series have been sold worldwide) and the movie franchise is a global phenomenon. Here are lessons, activities, and resources to add to the fun. Lesson Plans Writing ABC Books to Enhance Reading Comprehension Students in grades 3-5 make an alphabet book based on Harry Potter.

Tiger Painting. Free Oil Painting Art Lesson Oil Painting Lessons How to Draw Art Books Charcoal Art Pastels Acrylics Perspective for Artists Step One - Drawing and First Layers This painting is quite large - over 22 inches wide, but rather than get daunted with the size , we must remember to apply the same principle that we would on a smaller painting, breaking it down into easy stages. Above you can see my pencil drawing on my already primed canvas. Step Two Don't Be a Square - Lesson Summary After watching video clips from the Harry Potter and the Goblet of Fire movie, students explore the use of Punnett squares to predict genetic trait inheritance. The objective of this lesson is to articulate concepts related to genetics through direct immersive interaction based on the theme, The Science Behind Harry Potter. Students' interest is piqued by the use of popular culture in the classroom. This engineering curriculum meets Next Generation Science Standards (NGSS).

World much stupider than returning soldier remembered [TSA] If you ever needed proof that we are lost in a sea of pointless rules designed to make traveling (and indeed life in general) more difficult than it ever needed to be, this is it. The eminent minds at TSA saw fit to confiscate an armed soldier’s nail clippers because he might use them to take over the plane. At this point I would like to point out that he was not armed with nail clippers, he was armed with an assault rifle – which was apparently acceptable because it didn’t have bullets. The icing on the cake, swabbing all of the soldiers returning from a war-zone for explosives residue… of course they all failed – but not as hard as the guy who kept swabbing. In response to all of the comments, please read our update.