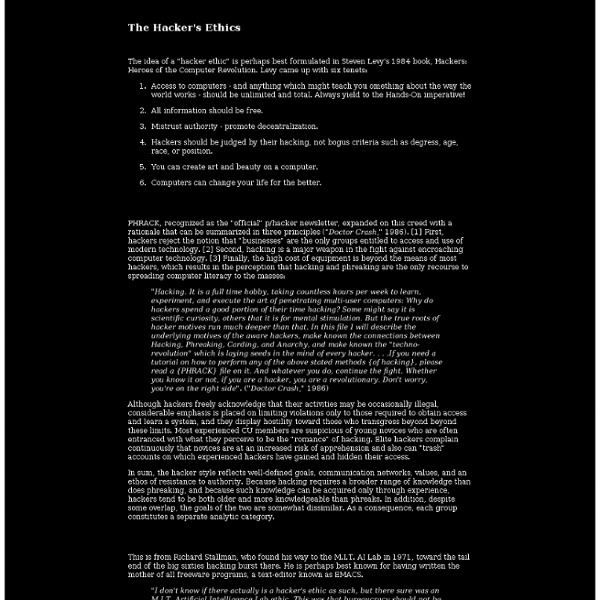 The idea of a "hacker ethic" is perhaps best formulated in Steven Levy's 1984 book, Hackers: Heroes of the Computer Revolution. Levy came up with six tenets: Access to computers - and anything which might teach you omething about the way the world works - should be unlimited and total. PHRACK, recognized as the "official" p/hacker newsletter, expanded on this creed with a rationale that can be summarized in three principles (" Doctor Crash ," 1986). [1] First, hackers reject the notion that "businesses" are the only groups entitled to access and use of modern technology. [2] Second, hacking is a major weapon in the fight against encroaching computer technology. [3] Finally, the high cost of equipment is beyond the means of most hackers, which results in the perception that hacking and phreaking are the only recourse to spreading computer literacy to the masses: " Hacking. This is from Richard Stallman, who found his way to the M.I.T. Brought to you by The Cyberpunk Project

Nodes » Free Jeremy Hammond! National Lawyers Guild at Jeremy Hammond’s Press Conference Heidi Boghosian spoke at the press conference for Jeremy Hammond (02/21/2013), alleged hacker accused of leaking millions of Statfor documents. The NLG wants to see Judge Preska recluse herself as her husband was one of the people who had information disclosed about him in the alleged hacks. Heidi Boghosian is the executive director of the National Lawyers Guild which represents individuals that are targeted by the government and corporations for activism. Learn more about Jeremy Hammond: Support us by subscribing here Check out our merchandise at Become a member of The Sponsor Lounge and get exclusive behind the scenes content while helping us grow!

The Cute Cat Theory Talk at ETech I’d forgotten just how much fun ETech is. Not only are the talks some of the most creative and innovative you can hear in the tech community, the room full of people is one of the most congenial, smart and funny you’re likely to encounter anywhere. Tim O’Reilly won’t come out and say that it’s his favorite conference, but he’s willing to declare it the most important that his organization puts on. I was only able to be in San Diego for one of the days of the conference – long enough to catch several excellent talks, but briefly enough that I’m relying on Ryan Singel of Wired to catch talks that I’m very sorry to miss: Larry Lessig’s plans to change congress; Quinn Norton, who’s now thinking about hacking her brain as well as her body; Joel Selanikio’s celebration of the mobile phone as a tool for transforming Africa. Singel did an excellent job with my talk as well, The Cute Cat Theory of Digital Activism. Web 1.0 was invented to allow physicists to share research papers.

Cute cat theory of digital activism Ethan Zuckerman Lolcat images are often shared through the same networks used by online activists. The Internet and censorship[edit] Zuckerman states that "Web 1.0 was invented to allow physicists to share research papers. Web 2.0 was created to allow people to share pictures of cute cats If the government chooses to shut down such generic tools, it will hurt people's ability to "look at cute cats online", spreading dissent and encouraging the activists' cause.[2][3] Chinese model[edit] According to Zuckerman, internet censorship in the People's Republic of China, which relies on its own, self-censored, Web 2.0 sites, is able to circumvent the cute-cat problem because the government is able to provide people with access to cute-cat content on domestic, self-censored sites while blocking access to Western sites, which are less popular in China than in many other places worldwide.[3][4] "Sufficiently usable read/write platforms will attract porn and activists. See also[edit] References[edit]

Information Warfare Monitor | Tracking Cyberpower HOW TO COMMUNICATE IF THE U.S. GOVERNMENT SHUTS DOWN THE INTERNET USA :: Freedom and Liberty :: Print this ArticleHOW TO COMMUNICATE IF THE U.S. GOVERNMENT SHUTS DOWN THE INTERNET02-07-2011 9:48 pm - Wallace Scenario: Your government is displeased with the communication going on in your location and pulls the plug on your internet access, most likely by telling the major ISPs to turn off service. This is what happened in Egypt Jan. 25 prompted by citizen protests, with sources estimating that the Egyptian government cut off approximately 88 percent of the country's internet access. NOTE: If you have advice to add, please log in and Aadd your comments. Print out your contact list, so your phone numbers aren’t stuck in the cloud. CB Radio: Short for "Citizens Band" radio, these two-way radios allow communication over short distances on 40 channels. Ham radio: To converse over these radios, also known as "amateur radios," you have to obtain an operator's license from the FCC. Packet Radio Back to the '90s: There do exist shortwave packet-radio modems.

How To Set Up An Open Mesh Network in Your Neighborhood Mesh networks can share web connections throughout a neighborhood, spreading the reach of a broadband connection. They're an excellent way to improve a community’s web access, and could also serve a role in the infrastructure for the Next Net that Douglas Rushkoff envisions. Open Mesh is a company that offers mesh network solutions for businesses and communities. They provided Shareable with this guide to how to set up a mesh network in your own neighborhood. It is now easy for anyone to extend their wireless coverage throughout a hotel, apartment, office, neighborhood, village, coffee shop, shopping mall, campground, marina or just about anywhere else you need to extend wireless coverage. The magic that makes this work is the Open-Mesh mini routers (as small as the size of a pack of cards) that can spread a single internet connection across multiple rooms. Some basic terminology: Network: A group of computers that can talk to each other – in our case, wirelessly. Gateway: Repeater: Node:

5 minute summary: Data Retention The EU data retention directive aims at enabling the retracing of who contacted whom via telephone, mobile phone or e-mail for a period of 6 to 24 months. In the case of mobile calls or text messages via mobile phone, the user's location is also to be logged. The data that is collected about the entire population allows our movements to be traced, any calls or communications with personal and business contacts to be monitored and removes privacy in our personal relationships. Information regarding the content of communications can be deduced relating to personal interests and the individual life circumstances of the persons communicating. Access to the data is granted to the police, public prosecutors, secret services and foreign states which hope for better prosecution of crimes. Until 2007, telecommunications providers were permitted to retain only data required for billing purposes. What is the problem? We are all suffering from data retention: Current situation Act now:

Who is Number 1 ethical hacker? by hernandezmaats Apr 6