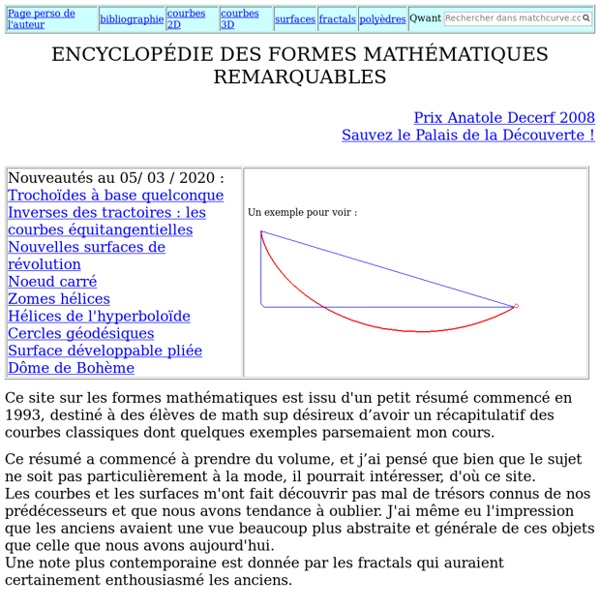 Math Encounters – The Museum of Mathematics Math Encounters Next presentation: “Peeling the World” Oct 1 at 4:00 PM by David Swart Mathematics This page is a list of mathematics articles in Mathematics and Multimedia. You might also want to check the Post List page which contains the newest posts in major categories. The complete list of posts arranged by month can be found in the Archives page. Complex Numbers Series The Divisibility Series Hammack Home This book is an introduction to the standard methods of proving mathematical theorems. It has been approved by the American Institute of Mathematics' Open Textbook Initiative. Also see the Mathematical Association of America Math DL review (of the 1st edition), and the Amazon reviews.

origami_constructions.pdf (Objet application/pdf) At the First International Meeting of Origami Science and Technology, Humiaki Huzita and Benedetto Scimemi presented a series of papers, in one of which they identified six distinctly different ways one could create a single crease by aligning one or more combinations of points and lines (i.e., existing creases) on a sheet of paper. Those six operations became known as the Huzita axioms. The Huzita axioms provided the first formal description of what types of geometric constructions were possible with origami: in a nutshell, quite a lot was possible! The six Huzita axioms. The six axioms are shown to the right. It has been shown that using the six Huzita axioms, it is possible to:

The Beauty of Mathematics: A Visual Demonstration of Math in Everyday Life This lovely video short from Yann Pineill and Nicolas Lefaucheux of Paris video production agency Parachutes succinctly demonstrates the underlying mathematics behind everyday occurrences in the format of a triptych. On the left we see the mathematical equation, in the middle a mathematical model, and on the right a video of such things as snowflakes, wind, sound, trees and magnetism. The video begins with the following quote: “Mathematics, rightly viewed, possesses not only truth, but supreme beauty — a beauty cold and austere, without the gorgeous trappings of painting or music.” —Bertrand Russell

TeX TeX (/ˈtɛx/ or /ˈtɛk/, see below) is a typesetting system designed and mostly written by Donald Knuth[1] and released in 1978. Together with the Metafont language for font description and the Computer Modern family of typefaces, TeX was designed with two main goals in mind: to allow anybody to produce high-quality books using a reasonably minimal amount of effort, and to provide a system that would give exactly the same results on all computers, at any point in time.[2] TeX is a popular means by which to typeset complex mathematical formulae; it has been noted as one of the most sophisticated digital typographical systems in the world.[3] TeX is popular in academia, especially in mathematics, computer science, economics, engineering, physics, statistics, and quantitative psychology.