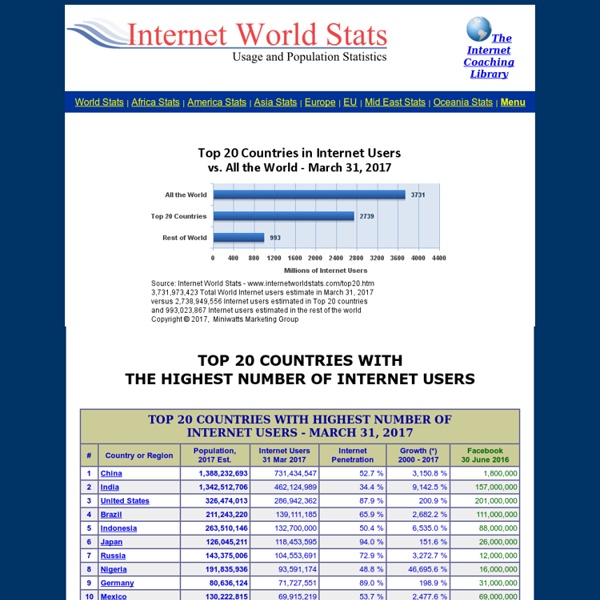 Global Digital Media - Advertising and Digital Marketing Trends and Statistics The advertising scene has undergone radical change and is still changing. With profits down between 5% and 10% on an annual basis, the performance of the traditional advertising market is under constant pressure. Data analytics is exposing the weakness of these traditional advertising business models and, like all of the other sectors affected by the digital economy, this means that these business models need to change.Internet Governance and Net Neutrality Insights The report analyses the developments regarding governance of the Internet and draws on developments from the World Conference on International Telecommunications (WCIT) and provides a case study on developments in the US in regards to net neutrality. Related:  What's happening in the Digital Realm ?

World ranking of 1.Q Which country has the highest IQ? What is the average IQ of your country? Here is the average IQ of more than 80 countries. These numbers came from a work carried out from 2002 to 2006 by Richard Lynn, a British Professor of Psychology, and Tatu Vanhanen, a Finnish Professor of Political Science, who conducted IQ studies in more than 80 countries. Richard and Tatu argues that differences in national income are correlated with differences in the average national intelligence quotient (IQ). They further argue that differences in average national IQs constitute one important factor, but not the only one, contributing to differences in national wealth and rates of economic growth. These results are controversial and have caused much debate, they must be interpreted with extreme caution. Sources: Average national IQs according to IQ and Global Inequality (2002)

156 Startup Failure Post-Mortems No survivorship bias here. A compilation of startup failure post-mortems by founders and investors. On his many failed experiments, Thomas Edison once said, I have learned fifty thousand ways it cannot be done and therefore I am fifty thousand times nearer the final successful experiment. Elsewhere, we have dug into the data on startups that died (as well as those acquihired) and found they usually die 20 months after raising financing and after having raised about $1.3 million. Most of the failures have been told by the company’s founders, but in a few cases, we did find a couple from competitors, early employees, or investors including Roger Ehrenberg (now of IA Ventures) and Bruce Booth (Atlas Venture). We analyzed 100+ startup failure post-mortems and identified the top 20 reasons startups fail. *2016 Update 3 (11/8/2016) We rounded up 12 more startups whose lessons ranged from “stick to what you’re good at” to “don’t use your VC money like a personal piggy bank.” Product: SunEdison

List of countries by literacy rate World map of countries shaded according to the literacy rate for all people aged 15 and over This is a list of countries by literacy rate. The figures represented are almost entirely collected by the UNESCO Institute for Statistics (UIS) on behalf of UNESCO with 2015 estimates based on people aged 15 or over who can read and write. Where data is taken from a different source, notes are provided. The data is collated by mostly using surveys within the last ten years which are self-declared by the persons in question.[1] UIS provide estimates based on these for the year 2015 with a Global Age-specific Literacy Projections Model (GALP).[2] The global literacy rate for all people aged 15 and above is 86.3%. List of UN member states[edit] List of other states and territories[edit] See also[edit] Notes[edit] References[edit] External links[edit] World Bank - Literacy rate, adult total (% of people ages 15 and above), for historical use.

Facebook’s Mark Zuckerberg: Augmented Reality on mobile is the future Facebook Q2 results: Mark Zuckerberg says they will be investing in Augmented Reality. Facebook’s second quarter results are now out with the company’s revenue clocking in at $6.44 billion, and the social network’s user base standing at 1.71 billion monthly active users. In the earnings call, Facebook CEO Mark Zuckerberg also revealed some interesting insights on what the company is doing with Augmented and Virtual Reality. Facebook owns Oculus VR which has created the Oculus Rift headset that went on sale earlier this year. Zuckerberg revealed in the earnings call that more than 1 million people (per month) use Oculus on mobile phones thanks to Samsung-Oculus Gear VR headset. Samsung’s Gear VR headset is powered by Oculus software, and users need an Oculus account to get the VR experience via their smartphones. Masquerade, which is written as MSQRD, is an app that Facebook bought in March this year. Pokemon GO’s success has generated massive interest in AR.

Countries by motor vehicle production Motor vehicles produced by country in 2013. Countries by volume of production since 1950 Countries by shares of production since 1950 See also[edit] References and notes[edit] External links[edit] OICA statistic Europe's Startups Are On The Map: The Most Well-Funded Tech Startups In Every European Country Our map infographic shows the top tech startups mapped by European country, as determined by funding totals. They include Spotify, Delivery Hero, and BlaBlaCar. Europe is home to prominent startup and innovation hubs like Berlin, Stockholm, and London. However, the tech boom is diffusing across continental Europe and startups are emerging outside of the established hotbeds for technology and innovation. Ireland (Future Finance), Spain (Cabify), and Denmark (Trustpilot), to name a few — all have at least one tech startup that has raised $100M+ to date. Using CB Insights data, we analyzed the most well-funded tech startups by country based on disclosed equity funding. With these criteria for selection, sixteen countries are excluded from the mapping — including Vatican City, Liechtenstein, and others. Tech unicorns, private tech companies valued at $1B+ or more, are represented among the 34 startups below. See the infographic below. Click on the image below to enlarge.

The World's Richest and Poorest Countries of 2016 | Global Finance Magazine To rank the world’s richest and poorest countries for 2016, we consider GDP per capita, adjusted for relative purchasing power. What do we mean when we apply terms like “richest” and “poorest” to entire countries? If one simply considers gross domestic product (GDP)—the total value of goods and services produced within each nation—then the richest five countries in the world are, in order, the United States, China, Germany, Japan and the UK. Yet those rankings don’t tell us much about relative living conditions. Similarly, the poorest five are, in order, Tuvalu, Nauru, Kiribati, the Marshall Islands, and Palau. A more accurate picture of living conditions begins with dividing the total production by the number of people, to look at GDP per capita. Our tables of the World's Richest and Poorest Countries for 2016 use IMF data for per capita GDP, adjusted for purchasing power parity (PPP). *Data collected from International Monetary Fund, World Economic Outlook Database, October 2016

VR startups go into cockroach mode to survive barren consumer market | VentureBeat | AR/VR | by Amir-Esmaeil Bozorgzadeh The VR industry continues to ride out the trough of disillusionment, prodded by the big tech players like HTC that hope to jumpstart a market that is ultimately driven by genuine and organic consumer demand, but there’s no sign of this actually happening. There might be some traction that pundits base their optimistic forecasts on, but hardly any of that is organic. Rather, it’s a reflection of massive marketing dollars at play. Meanwhile VR startups with products or services that depend on consumer demand appearing sooner rather than later are left in an awkward position. “The VR market is still very young and consumers seem to be taking a cautious approach,” Jitesh Ubrani, senior research analyst at IDC told MarketWatch this week. Back in March I wrote that VR accelerators would play a key role in juicing up the quality of immersive content, products, and offerings. Above: VRBASE co-working space, incubator, accelerator, and studio in Amsterdam. Above: Vizor WebVR Editor

Caffeine (Coffee) Consumption By Country Here is a list of the Top 50 coffee consuming countries as well as the type of caffeine consumption by country worldwide. The first set of data was provided to us by euromonitor.com and comes with the following caveat: These per capita figures refer to the dry weight of coffee (measured in metric tonnes) rather than brewed volume which is the final amount of liquid product the consumer drinks that is prepared by pouring hot liquid over the dry volume product of coffee. Because the conversion factor to reach brewed volume varies from market to market, depending on preferred strengths, etc., looking at dry volume figures across countries provides a more apples to apples comparison. – Beverages Analyst, Dana LaMendola Well anyway, here’s what their 2013 data revealed about the amount of coffee consumed by country per capita (per person on average). Top 50 Coffee Consuming Countries There you have it. But, look who is the overall largest buyer of coffee worldwide. How Countries Consume Caffeine

Singa, a startup out of Helsinki, scores €1.75M seed round to build the ‘Spotify of karaoke’ | TechCrunch I have an aversion to karaoke after the band I used to play in was entirely upstaged at a gig by a karaoke machine, but, as pastimes go, it remains a huge market. And where markets are big, startups like to go. Enter Finland’s Singa, which is building a digital karaoke service that, in its own words, wants to do for karaoke what Spotify has done for music. The Helsinki-based company has recently scored €1.75 million in seed funding led by Initial Capital, with participation from Tamares Holdings, Superhero Capital, Reaktor Ventures and Tekes. “Over my 10 years in the karaoke industry running Karaoke World Championships, I worked with big and small karaoke companies all over the world, from Asia to the U.S., and gained insight into the industry and saw that while most other entertainment media were moving towards streaming, karaoke was still stuck in the 90s,” Singa co-founder and CEO Atte Hujanen tells me.

Global Gender Gap Report 2016 To explore the data for a specific country please select it in the drop-list at left. To understand top performers across regions and aspects of gender parity see the Rankings section below. Download a data set for 2016 data of the Global Gender Gap report. The Global Gender Gap Index reveals that all countries can do more to close the gender gap. Considering the average gap that remains to be closed in each world region, based on the Report’s updated regional classification, At a global level, only two regions—Western Europe and North America—have a remaining gender gap of less than 30%, at 25% and 28%, respectively. Despite its high regional average, there is wide spread of outcomes among the 20 countries covered in the Western Europe region. >> read more Global Gender Gap Index 2016 The highest possible score is 1 (equality) and the lowest possible score is 0 (inequality)

China Becomes First Country in the World to Test a National Cryptocurrency In Brief China's central bank has developed its own cryptocurrency, which is now being tested. Cryptocurrencies have the potential to not only benefit China, but the rest of the world, due to their basis in blockchain. Benefits of Digital Currency China’s central bank — the People’s Bank of China — has developed a prototype of a cryptocurrency that it could end up in circulation in the near future. The potential benefits of developing a digital currency are significant, particularly in China. The Rise of Cryptocurrencies Since Bitcoin’s humble beginnings back in 2009 (when it was only valued at around 0.0007 USD) the digital currency, and the very idea of cryptocurrencies in fact, has grown monumentally. Although China’s experimental approach to simulate a self-developed cryptocurrency’s usage is the first of its kind, other countries and institutions have made strides in that direction as well.