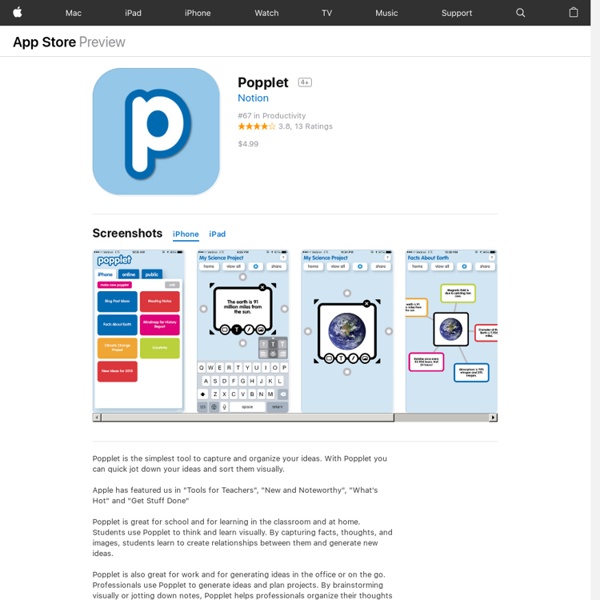 Description Popplet is the simplest tool to capture and organize your ideas. With Popplet you can quick jot down your ideas and sort them visually. Apple has featured us in "Tools for Teachers", "New and Noteworthy", "What's Hot" and "Get Stuff Done" Popplet is great for school and for learning in the classroom and at home. Students use Popplet to think and learn visually. Popplet is also great for work and for generating ideas in the office or on the go. With this version of Popplet you can have as many Popplet boards as you would like on your iPhone or iPad. + Study: School Projects, Class Notes+ Explore Ideas: Brainstorming, Mindmapping+ Plan Projects: Diagrams, Process Charts + Collect Inspiration: Mood Boards, Scrapbook, Travel Plans Key Features: These are additional features if you sign-up and create an 'online' account: + 10 free 'online' boards accessible through a web browser at www.popplet.com+ Ability to collaborate with other Popplet users on your online boards ...More by punjiba

NGA Kids Description The NGAkids Art Zone app contains eight interactive activities inspired by works in the collection of the National Gallery of Art, plus a sketchbook for freehand drawing and a personal exhibition space where users can save and display art created with the program. The child-friendly interface, easy-to-use tools, and the overarching emphasis on discovery, careful looking, and artistic self-expression make the NGAkids app educational and fun for the whole family. Each activity offers various levels of complexity. The app is suitable for all age groups. It is optimized for ages 9 through 11, but younger children, as well as teens and adults, will find the program enjoyable and artistically motivating. How Kiev Is Fighting Russia's Misinformation Campaign On a leafy street in the Ukrainian capital, just steps from the ornate building that houses the country’s parliament, sits what is perhaps the nation’s most powerful weapon in its protracted battle of ideas with Russia. There, tucked away in a once beautiful tsarist-era building, are the offices of the Ukrainian National Memory Institute. It is a tiny government agency with a massive mandate: to counter decades of Russian intellectual disinformation. Officially, the institute’s mission is to help Ukraine overcome the legacy of totalitarianism endemic to former communist regimes. The goal is an essential one, since the Soviet Union rewrote the national history of its constituent parts during the decades of the Cold War.

14 Bloom's Taxonomy Posters For Teachers 14 Brilliant Bloom’s Taxonomy Posters For Teachers by TeachThought Staff Bloom’s Taxonomy is a useful tool for assessment design, but using it only for that function is like using a race car to go to the grocery–a huge waste of potential. In an upcoming post we’re going to look at better use of Bloom’s taxonomy in the classroom, but during research for that post it became interesting how many variations there are of the original work. While a handful of the charts below only show aesthetic changes compared to others, most are concept maps of sorts–with graphic design that signifies extended function (power verbs), detail (clear explanations), or features of some sort (Bloom’s Taxonomy tasks by level). The follow simple, student-centered Bloom’s graphics were created by helloliteracy!

iTooch Elementary School view in App Store iTooch Elementary School offers some great practice and efficient testing for Common Core Standards in language arts, math and science for grades 3-5 as well as fifth grade health. iTooch Elementary School provides practice for language arts, math, and science concepts in grades three through five, as well as fifth grade Health. There are ten packages of subject- and grade-specific questions that can be tested for free on two levels, and expansion packs that can be acquired as in-app purchases to add additional levels of difficulty and new concepts in each area. Revenge of the Oligarchs The Federal Reserve has a messaging problem. Having repeatedly prepared the world for an interest rate rise they suggested was around the corner, policymakers at the U.S. central bank are now bending over backwards to attempt another graceful about-face. It’s not working.

Education, the Brain and Common Core State Standards Understanding even the basics of how the brain learns -- how people perceive, process and remember information -- can help teachers and students successfully meet the requirements of the Common Core State Standards (CCSS). This initiative aims to establish a relatively standardized knowledge base among all students, alleviating the background knowledge gap. It's designed to promote critical, divergent thinking, equipping students with information relevant to the real world and the ability to use it.

The FunWorks This Web site is about careers. Not just the interesting ones other people have, but the ones YOU can have. Don't know where to start? Well, dive right in and: EXPLORE many different areas, not just the ones that seem obvious THINK about what you enjoy. Language Empires view in App Store Language Learning is an outstanding application to help students in elementary and middle school practice critical language skills in both oral and written forms. Language Empires is a comprehensive language and communication program suitable for students in elementary grades and some in middle school. It will also be useful for remedial students in high school.

The Arab World’s Challenge The fact that this year’s Nobel Peace Prize has been awarded to the Tunisian National Dialogue Quartet – a group of four organizations that played a key role in Tunisia’s attempts to build a pluralistic democracy after its 2011 revolution – demonstrates how important inclusive policies are to the building of a strong democracy. Despite major differences between its secular and religious forces, the Tunisians were able, in three short years after the revolution, to agree on a constitution that ensured a place in society for all groups – upholding the peaceful rotation of power, granting full rights to women and ensuring protections for freedoms of speech and belief. So far, Tunisia has been a rare exception in the region. In Egypt, exclusionist policies by both Islamist forces and so-called liberal secular forces have meant the country is still mired in a deep economic crisis and political stagnation.

MSP:MiddleSchoolPortal/Connections: Linking Mathematics to Social Studies, Art, and Science - Middle School Portal From Middle School Portal+ Connections! Linking Mathematics to Social Studies, Art, and Science - Introduction+ The second publication in our Connections series, Math History as a Teaching and Learning Tool, identifies resources that support the teaching of math history as context for topics in a standard middle school mathematics curriculum. Teaching that integrates the curriculum is often set as a goal for the middle school but is not so often reached. Free Reading GamesLearning Today Our reading games and activities are research-based and designed to help build key reading skills in a fun and engaging way. Included are phonemic awareness, phonics, sight words, vocabulary and reading comprehension. Give them a try and let us know what you think. Go fishing for sight words with Kirima and Kylie the Seal. Make a spoon puppet and practice your sequencing skills.

Saudi Arabia’s Royal Drug Problem A Saudi prince and four others were reportedly arrested in Lebanon Monday after authorities found more than two tons of illegal drugs, including cocaine and the amphetamine Captagon, in crates loaded onto a Saudi-bound jet. But if history is any indication of his fate, the unidentified member of the royal family may be let off the hook if he can find his way home, where other members of his sprawling family tree have previously avoided international accusations of drug smuggling under protection in Riyadh. In 1999, Saudi Prince Nayef bin Sultan bin Fawwaz al-Shaalan allegedly smuggled two tons of cocaine from Venezuela to France.

 Students have the opportunity to use mind mapping and brainstorming stories.  Students can keep journals, notes and lists of their readings.  Stories can be put in diagrams and charts for visual learners. by gamsdf1977 Oct 22