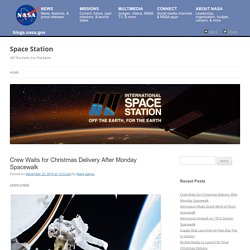 A pair of spacewalkers are cleaning up and reporting back to ground controllers after a short spacewalk Monday morning. A Christmas delivery is also due at the International Space Station Wednesday at 5:31 a.m. EST/10:31 a.m. UTC. Commander Scott Kelly and Flight Engineer Tim Kopra quickly prepared over the weekend for the spacewalk to release a stalled robotic transporter. The stalled robotic transporter needed to be moved then latched to its worksite ahead of the Progress arrival triggering Monday’s spacewalk. Cosmonauts Yuri Malenchenko and Sergey Volkov are preparing for the Progress arrival by testing the TORU tele-robotic rendezvous system.

Spacewalkers clean up and wait for Christmas delivery while @ISS_Research goes on... .@astro_tim and @StationCDRKelly primed and ready for their spacewalk yesterday. #ISS and #TMA19M 2015-12-15 17:22z with bright moon @astro_timpeake @esa @ISS_Update @Space_Station @VirtualAstro. Fix was pretty easy, but the rest always a challenge. With great team on earth we got it done safely. #YearInSpace.

Happy Holidays from The International Space Station. Space Station. A pair of astronauts is exploring breathing risks during long term space missions today while a trio of crew members is packing a Soyuz spacecraft for the return home. 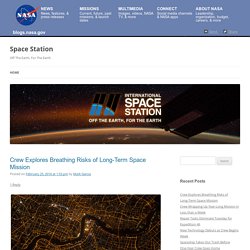 NASA astronaut and two-time space station resident Tim Kopra joined first-time British astronaut for the Airway Monitoring experiment. That study explores the risk of breathing in toxic dust during future crewed missions to Mars which can possibly upset a crew member’s respiratory system. Kopra and Peake will be staying in space until June with cosmonaut Yuri Malenchenko. They will become the Expedition 47 crew when a pair of One-Year crew members and a veteran cosmonaut undock in their Soyuz spacecraft and return to Earth next week. Station Commander Scott Kelly and Flight Engineer Mikhail Kornienko are set to complete 340 days in space when they land in Kazakhstan on March 1 U.S. time. 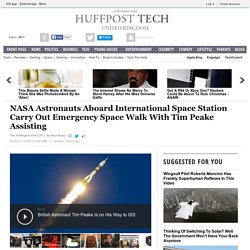 Both Tim Kopra and Scott Kelly are venturing outside the spacecraft to fix a jammed rail car, which is expected to take around three hours. Peake will be monitoring both his colleagues while they make the repairs. Station Managers “GO” For Monday Morning Spacewalk. NASA astronauts Scott Kelly and Tim Kopra will conduct a spacewalk Monday morning. 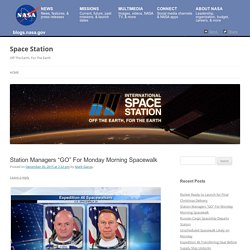 Credit: NASA The International Space Station Mission Management Team met Sunday and gave its approval to proceed with a spacewalk Monday out of the Quest airlock by Expedition 46 Commander Scott Kelly and Flight Engineer Tim Kopra of NASA to assist in moving the Mobile Transporter rail car a few inches to a worksite on the station’s truss where it can be latched in place and electrically mated to the complex. The green light for the unplanned spacewalk to take place Monday came three days after the Mobile Transporter stalled just four inches away from its embarkation point at worksite 4 near the center of the station’s truss as it began to move to another worksite to support robotic payload operations with its attached Canadarm2 robotic arm and the Special Purpose Dexterous Manipulator (Dextre).

The planned 3 to 3 ½ hour spacewalk is scheduled to begin Monday at 7:10 a.m. Busy day on #ISS today preparing possible EVA for @astro_tim & @StationCDRKelly tomorrow. My job is to help them get out and back safely. Lufthansa pilots snap Principia launch from the skies. Posted on December 17, 2015 by julien As they cruise 8 km above our planet, airline pilots have some of the best ‘office views’ available (after astronauts possibly). 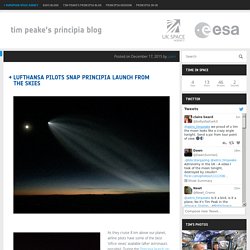 During the Principia launch on 15 December, Lufthansa pilots Michael Schwarz and Frank Barma were lucky enough to see the launch of Tim Peake, Tim Kopra and Yuri Malenchenko from the cockpit. They managed to snap these pictures of the Soyuz rocket ascending to space. All rocket launches are coordinated with flight controllers who redirect aircraft traffic to keep at a safe distance. At the time these pictures were taken, Lufthansa flight LH 713 was above Russia, approx 100 km east from Novosibirsk. Location of aircraft over Russia. Tim Peake's Principia blog. Posted on December 17, 2015 by julien Tim arriving at the Space Station. 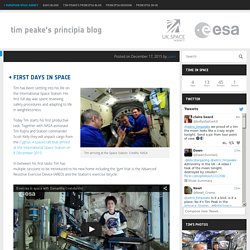 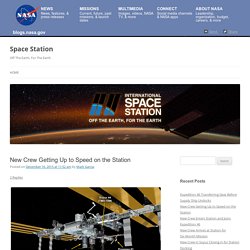