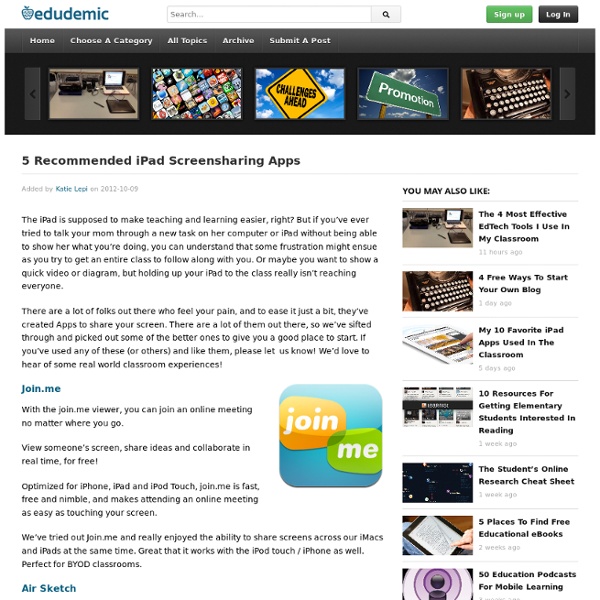 The iPad is supposed to make teaching and learning easier, right? But if you’ve ever tried to talk your mom through a new task on her computer or iPad without being able to show her what you’re doing, you can understand that some frustration might ensue as you try to get an entire class to follow along with you. Or maybe you want to show a quick video or diagram, but holding up your iPad to the class really isn’t reaching everyone. There are a lot of folks out there who feel your pain, and to ease it just a bit, they’ve created Apps to share your screen. Join.me With the join.me viewer, you can join an online meeting no matter where you go. View someone’s screen, share ideas and collaborate in real time, for free! Optimized for iPhone, iPad and iPod Touch, join.me is fast, free and nimble, and makes attending an online meeting as easy as touching your screen. We’ve tried out Join.me and really enjoyed the ability to share screens across our iMacs and iPads at the same time. Air Sketch

Google spreadsheets, now with Discussions Posted by Patrick Donelan, Software Engineer (Cross-posted from the Google Drive blog.) Getting things done with others would be much easier if everyone was sitting right next to you. But since that’s rarely the case, we’re always updating Google Drive to make it easier to collaborate with others, no matter where you are or who you’re with. Today we’re bringing the discussion functionality that’s already in documents and presentations to spreadsheets. The total number of comments are also tallied up at the bottom of the screen on the sheet tab, and hovering over the comment icon shows all the comments on that sheet. And just like you’re used to with comments elsewhere, you can +mention someone to automatically include them in a discussion and send them a notification via email – and they can even reply to the comment without leaving their inbox. Any comments that were created in spreadsheets before today are still available and saved as “Notes”.

Dropbox Lets You Switch Between Accounts Without Logging Out 3 December '12, 09:46pm Follow Dropbox has earned its place as a powerful productivity tool among individuals and teams, but in playing two roles, many Dropbox users are now stuck with two separate accounts, forced to constantly log in and out. Now, to ease the experience for users bound to a teams and a personal account, Dropbox has added the ability to easily switch between the two without ever logging out (Google-style). It’s noteworthy that this feature will not affect Dropbox users that own two separate personal accounts. If you’re a team player, simply log into Dropbox, click your name in the top right corner, select ”Switch Accounts,” and sign into your second Dropbox account. Of course, offering this feature to holders of multiple personal accounts would be great too, but that move could also undermine Dropbox’s monetization strategy by making it easy for users to link free storage together. ➤ Dropbox for Teams Image credit: Siri Stafford / Thinkstock

11 Essential Tools For Better Project-Based Learning The rise of technology used in classrooms has made learning much more interactive. The emergence of iPads to browser-based tools in project-based learning, take teaching to a new level in the 21st century. Even the current trends in education include the use of new technology, from collaborative projects to blending traditional textbook teaching with innovative tools. For students, the core aim of project-based learning is to put theory into practice and gain new skills throughout the process. A major advantage of digital tools used is better engagement in the classroom. Browser-based tools and several apps used in education are especially useful for researching, storytelling and collaborative video making. Handy mobile devices allow students to be inspired when outside classroom by creating and sharing ideas and creations instantly. Here is a mini guide to some of the project based learning tools. 1) Mindmeister As the name suggests, this tool is great for mapping out ideas. 2) Glogster