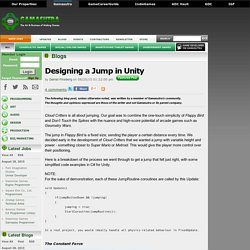 The thoughts and opinions expressed are those of the writer and not Gamasutra or its parent company. Cloud Critters is all about jumping. Our goal was to combine the one-touch simplicity of Flappy Bird and Don’t Touch the Spikes with the nuance and high-score potential of arcade games such as Geometry Wars. The jump in Flappy Bird is a fixed size, sending the player a certain distance every time. We decided early in the development of Cloud Critters that we wanted a jump with variable height and power - something closer to Super Mario or Metroid. Here is a breakdown of the process we went through to get a jump that felt just right, with some simplified code examples in C# for Unity.

For the sake of demonstration, each of these JumpRoutine coroutines are called by this Update: void Update() if(jumpButtonDown && ! Jumping = true; StartCoroutine(JumpRoutine()); The Constant Force float timer = 0; The Next Generation of Mobile Interaction Design. Machinations: Game Feedback Diagrams. Quick Introduction to Moqups · Moqups. Online mockups made simple. Game Design Tools for Collaboration. Another approach to formalize game design is to divide it into a set of 'slices' to focus the designer's attention when he creates a game. 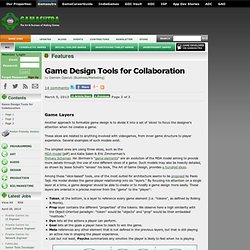 These slices are related to anything involved with videogames, from inner game structure to player experience. Several examples of such models exist. The simplest ones are using three slices, such as the MDA model [pdf] and Katie Salen & Eric Zimmerman's Primary Schemas. Aki Jävrinen's "game elements" are an evolution of the MDA model aiming to provide more details through the use of nine different slices of a game. Such models may also be heavily detailed, as shown by Jesse Schell's "lenses" his book, The Art of Game Design, provides a hundred slices. Among these "slice-based" tools, one of the most suited for architecture seems to be proposed by Paolo Tajè.

Token, at the bottom, is a layer to reference every game element (i.e. Media. Tension Maps: A Process for Identifying Low-Risk Design Opportunities. I've made a point that some system-level changes in your game can be made with minimal risk, and I've identified a few examples of such changes. 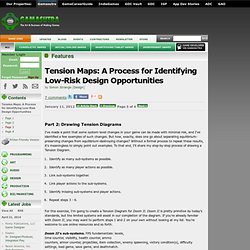 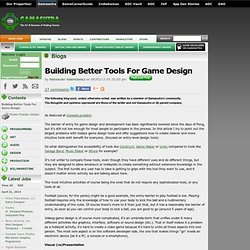 The thoughts and opinions expressed are those of the writer and not Gamasutra or its parent company. As featured at liveware.problem The barrier of entry for game design and development has been significantly lowered since the days of Pong, but it's still not low enough for most people to participate in the process. In this article I try to point out the largest problems with todays game design tools and offer suggestions how to create cleaner and more intuitive tools with benefit for everyone.

(focused on entry-level design tools) So what distinguishes the accessibility of tools like Construct, Game Maker or Unity compared to tools like Garage Band, Music Maker or iMovie for example? The most intuitive activities of course being the ones that do not require any sophisticated tools, or any tools at all. Visual (re)Presentation The start-up screen of Garage Band, with sample-project. Summary. Story Telling & Game Design Tool. Game Design Documentation. Description: Game Design Documentation is the name I have given to written material that describes the design of a game and the methods that support this endeavor, i.e. guidelines (the does and don’t), templates (outlines and structures) or rules (what the content should contain). 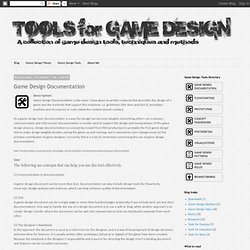