All tools. All the time. Your source for news, information, and reviews of hand tools, power tools, and tools of all kinds. 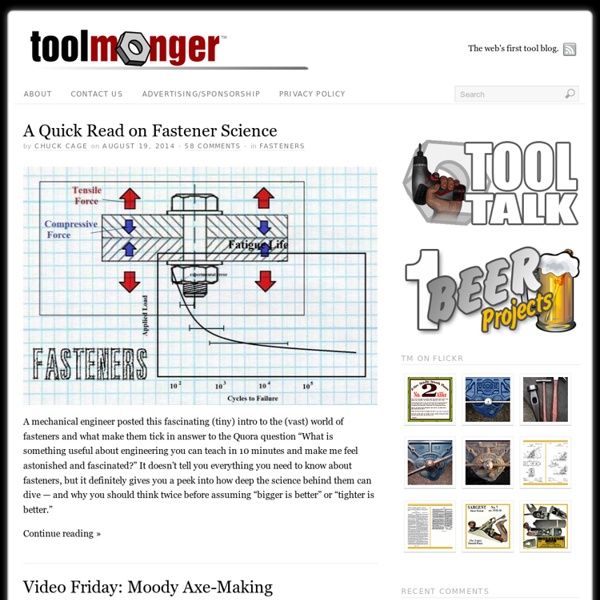 wanderingspace Tool Snob - The Online Source for Tool News and Reviews Cake Wrecks - Home At ToolCrib.com you'll find power tools, power tool reviews and cordless power tools at ToolCrib.com, Your tool crib online. 10 Ways to Customize a Rental Bathroom | Apartment Therapy Chicago Add storage Renovation and rental are two words that you don't hear too much in the same sentence, but even though you might not be able to completely overhaul your rental apartment, there are ways to cover up that old avocado-green tile, add storage to your small shower, or transform an ugly overhead light without making your landlord angry in the process. Add Storage: Rental bathrooms usually don't come with a lot of built-in storage, so small additions like shower caddies and wall-mounted shelves can help. RELATED POSTS• 10 Ways to Customize a Rental• 11 Luxurious Touches to Add to Your Rental Bathroom• A Rental Bath, Accessorized Photos: SimpleHuman, Emma Jeffs, Mibo, Sarah Coffey, Gregory Han, Viva Terra, Crate & Barrel, Matteo, Wisteria

Tools-Plus Tool Talker BlogTools-Plus Tool Talker Blog » OMG Posters! Wood characteristics, properties of wood and information about wood This is a huge topic and I have several links in the text. Each leads you to more details about a particular topic on wood or the characteristics of wood (or a related subject), so make sure and check them out. I guess it comes as no surprise that I love wood. It starts with my love of trees. The door panels are cherry with mineral streaks running through them. On the drawer front, on the lower left, you can see where a branch divided the heartwood and sapwood of the walnut (the solid light band is maple I laminated for further contrast). Lumber yards often toss this sort of thing into the mark-down bin, or even the burn pile. So, next time you're out in the woods take a look around and enjoy the fresh air, then trot over to your local lumber yard and see if they have any good discards.

Mad Gasser of Mattoon The Mad Gasser of Mattoon (also known as the "Anesthetic Prowler", Friz, the "Phantom Anesthetist", the "Mad Gasser of Roanoke", or simply the "Mad Gasser") was the name given to the person or people believed to be responsible for a series of apparent gas attacks that occurred in Botetourt County, Virginia, during the early 1930s, and in Mattoon, Illinois, during the mid-1940s. Whether the attacks were anything more than a case of mass hysteria, if the individual reports were connected, and the ultimate explanation for the events all remain debated.[1] Appearance[edit] Most contemporary descriptions of the Mad Gasser are based on the testimony of Mr. and Mrs. Bert Kearney of 1408 Marshall Avenue, the victims of the first Mattoon case to be reported by the media. Reported attacks[edit] Botetourt County, Virginia[edit] The first recorded Mad Gasser incident occurred in Botetourt County, Virginia, with attacks occurring between December 22, 1933 and February 1934. Chronology[edit] See also[edit]

Vega 50" Fence Vega 50" Utility Fence I had some birthday money burning a hole in my pocket and I wasn't all that happy with my stock Jet fence, so I decided to upgrade. It didn't help that Woodworkers Warehouse was having a 10% off sale and Redmond Machinery had some great prices on some scratch and dent Biesemeyer Fences. I also wanted to make an outfeed table and I thought I should have my new fence before I embarked on that project. After much thought and back and forth trying to decide on either the Beisemeyer 50" HomeShop or the Vega, I decided on the Vega. The main attraction of the Vega over the Biesemeyer is the micro adjustment feature. The way it operators is that you unlock both levers and move your fence. Below is a picture of the machined underside of the fence. Installation:Installation of the fence was a snap. Once you remove your old fence basically all you have left to do is install 4 brackets. Below you can see one of the hangers for the front rail. Ok, I just added the table.