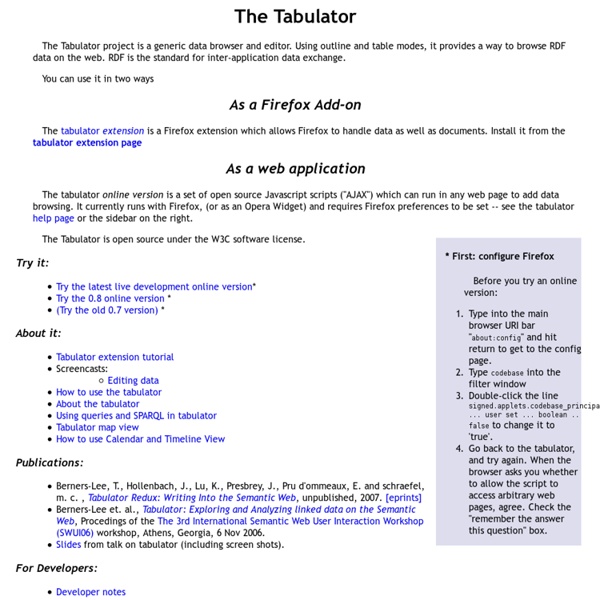 The Tabulator project is a generic data browser and editor. Using outline and table modes, it provides a way to browse RDF data on the web. RDF is the standard for inter-application data exchange. You can use it in two ways As a Firefox Add-on The tabulator extension is a Firefox extension which allows Firefox to handle data as well as documents. As a web application The tabulator online version is a set of open source Javascript scripts ("AJAX") which can run in any web page to add data browsing. The Tabulator is open source under the W3C software license. Try it: About it: Publications: Berners-Lee, T., Hollenbach, J., Lu, K., Presbrey, J., Pru d'ommeaux, E. and schraefel, m. c. , Tabulator Redux: Writing Into the Semantic Web, unpublished, 2007. For Developers: Thanks to all those who have provided feedback, code patches etc. Data links Only if you have a data browser, such as ffox+Tabulator extension, installed. Tabulator project

SWSE Social Hacking The Tabulator (1) Tim Berners-Lee Tim coded up the original version at odd times in November and December 2005. See Links on the Semantic Web from Dec 2005 Undergraduate Research Opportunity Program (UROP) over June-August 2006 people are below. A new team will work over the summer. Yushin Chen "Joyce" wrote the calendar views, and incorporated the Simle timeline. Lydia Chilton Lydia is working on statistical analysis, charts, etc. Ruth Dhanaraj Ruth worked on the Tabulator in January 2006, adding the asynchronous fetching of documents during queries, etc. Adam Lerer Adam works on the back-end -- the query system, and generic stuff around the query UI. Jim Hollenbach Jim is responsible for the map view. David Sheets David wrote the RDF parser, and does a lot of architecture and release engineering. Thanks also to Dan Connolly and Ralph Swick for co-supervising students and for ideas, support, testing and encouragement. When you use these techniques on the server, the tabulator works better.

Tools This page gives an overview of software tools related to the Semantic Web or to semantic technologies in general. Due to the large amount of tools being created in the community, this site is always somewhat outdated. Contributions and updates are welcomed. Adding your own Adding your own tool is as easy as creating a page. Do not forget to use a suitable category to classify the tool, otherwise it will not appear below. If your tool is an OWL 2 implementation or a RIF implementation not yet listed here, please consider to add it. Current tools on semanticweb.org.edu The following tools are currently recorded in this wiki. RDF2Go (Version 4.8.3, 4 June 2013) Bigdata (Version 1.2.3, 31 May 2013) Semantic Measures Library (Version 0.0.5, 4 April 2013) HermiT (Version 1.3.7, 25 March 2013) Fluent Editor (Version 2.2.2, 20 March 2013) The following is a list of all tools currently known (use the icons in the table header to sort by any particular column)

C Opens Data on the Web with SPARQL Powerful Technology for Querying Distributed and Diverse Data Contact Americas, Australia -- Ian Jacobs, <ij@w3.org>, +1.718.260.9447 or +1.617.253.2613 Contact Europe, Africa and the Middle East -- Marie-Claire Forgue, <mcf@w3.org>, +33.492.38.75.94 Contact Asia -- Yasuyuki Hirakawa <chibao@w3.org>, +81.466.49.1170 -- 15 January 2008 -- W3C announced today the publication of SPARQL, the key standard for opening up data on the Semantic Web. "Trying to use the Semantic Web without SPARQL is like trying to use a relational database without SQL," explained Tim Berners-Lee, W3C Director. There are already 14 known implementations of SPARQL, many of which are open source. SPARQL Overcomes Traditional Query Language Limitations of Local Searches, Single Formats Many successful query languages exist, including standards such as SQL and XQuery. The goal of the Semantic Web is to enable people to share, merge, and reuse data globally. SPARQL Turns Data Access into a Web Service

Semantic Web roadmap Up to Design Issues A road map for the future, an architectural plan untested by anything except thought experiments. This was written as part of a requested road map for future Web design, from a level of 20,000ft. It was spun off from an Architectural overview for an area which required more elaboration than that overview could afford. Necessarily, from 20,000 feet, large things seem to get a small mention. It is architecture, then, in the sense of how things hopefully will fit together. This document is a plan for achieving a set of connected applications for data on the Web in such a way as to form a consistent logical web of data (semantic web). Introduction The Web was designed as an information space, with the goal that it should be useful not only for human-human communication, but also that machines would be able to participate and help. It follows the note on the architecture of the Web, which defines existing design decisions and principles for what has been accomplished to date.

RDF Automation Ushering in Semantic Web Researchers with the Rensselaer Polytechnic Institute (RPI) have thrown themselves head over heels into the semantic web. At this year's 8th International Semantic Web Conference, they presented a paper (download the PDF) focused on the problem of automatically generating the metadata that many semantic web functionalities rely on. Talking about RDF closures can cause eyelids to flutter, but the RPI folks aren't living in some theoretical world. A Quick RDF Primer Before I get into the tech, here's a quick primer for those who don't know their RDFs from their RFCs. Ultimately, RDF is the heart of the Semantic Web. The most important RDF concept to understand is that of the RDF Triple. Resource Description Framework (RDF) Triple — Subject, Predicate (or Property) and Object (or Value) The meaning (or semantic value) of an RDF expression is that some relationship — defined by the RDF Predicate/Property — exists between the RDF Subject and the RDF Object/Value. RDF in Action <?

Notation3 (N3) A readable RDF syntax Up to Design Issues An RDF language for the Semantic Web This article gives an operational semantics for Notation3 (N3) and some RDF properties for expressing logic. These properties, together with N3's extensions of RDF to include variables and nested graphs, allow N3 to be used to express rules in a web environment. This is an informal semantics in that should be understandable by a human being but is not a machine readable formal semantics. These properties are not part of the N3 language, but are properties which allow N3 to be used to express rules, and rules which talk about the provenance of information, contents of documents on the web, and so on. The log: namespace has functions, which have built-in meaning for CWM and other software. See also: The prefix log: is used below as shorthand for the namespace < Motivation The motivation of the logic was to be useful as a tool in in open web environment. Formal syntax Semantics Note. Simplifications means

The Semantic Web: An Introduction This document is designed as being a simple but comprehensive introductory publication for anybody trying to get into the Semantic Web: from beginners through to long time hackers. Recommended pre-reading: the Semantic Web in Breadth. Table Of Contents What Is The Semantic Web? The Semantic Web is a mesh of information linked up in such a way as to be easily processable by machines, on a global scale. The Semantic Web was thought up by Tim Berners-Lee, inventor of the WWW, URIs, HTTP, and HTML. What's the rationale for such a system? So the Semantic Web can be seen as a huge engineering solution... but it is more than that. The Semantic Web is generally built on syntaxes which use URIs to represent data, usually in triples based structures: i.e. many triples of URI data that can be held in databases, or interchanged on the world Wide Web using a set of particular syntaxes developed especially for the task. URI - Uniform Resource Identifier RDF - Resource Description Framework Why RDF? Logic

Primer - Getting into the semantic web and RDF using N3 [translations into other languages ] The world of the semantic web, as based on RDF, is really simple at the base. This article shows you how to get started. Subject, verb and object In RDF, information is simply a collection of statements, each with a subject, verb and object - and nothing else. <#pat><#knows><#jo> . Everything, be it subject, verb, or object, is identified with a Uniform Resource Identifier. There is one exception: the object (only) can be a literal, such as a string or integer: <#pat><#knows><#jo> . The verb "knows" is in RDF called a "property" and thought of as a noun expressing a relation between the two. <#pat><#child><#al> . alternatively, to make it more readable, as either <#pat> has <#child><#al> . or <#al> is <#child> of <#pat> . There are two shortcuts for when you have several statements about the same subject: a semicolon ";" introduces another property of the same subject, and a comma introduces another object with the same predicate and subject. could be written

Semantic Studios | Information Architecture, User Experience, Fi What is the Semantic Web? Introduction Many people are not clear as to what the Semantic web is, and as we are the Semantic Web Agreement Group, we need to define it for people. Therefore, here is an attempt at a clear view of the Semantic Web:- The Semantic Web is a Web that includes documents, or portions of documents, describing explicit relationships between things and containing semantic information intended for automated processing by our machines. It operates on the principle of shared data. Clear Intent Although the SW is a Web of data, it is intended primarily for humans; it would use machine processing and databases to take away some of the burdens we currently face so that we can concentrate on the more important things that we can use the Web for. Practical solutions include the use of XSLT to derive RDF from XML sources, the work on topic maps and RDF convergence, the emergence of general-purpose RDF databases and engines, and general and specific GUIs for RDF data. - XML.com An Example Data:- Filter:-