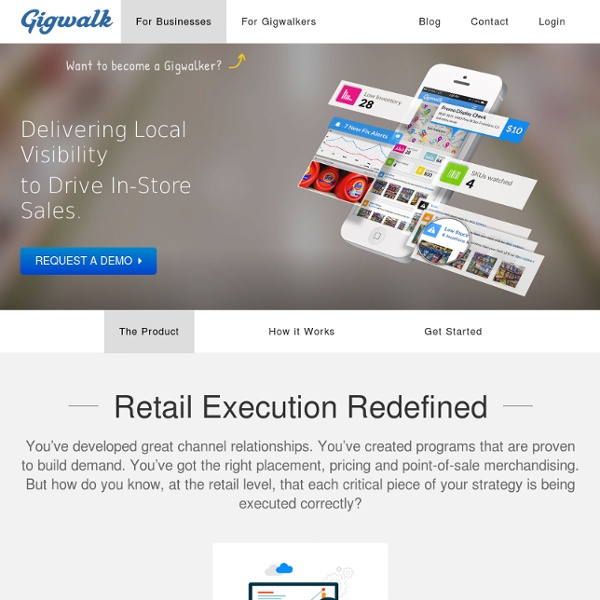 No Printer Required: First Paperless Daily Deal Service Launches Gaming platform SCVNGR has teamed up with American Express and Levi's to create the first paperless daily deal redemption system. If you've ever purchased a Groupon or LivingSocial daily deal, you've probably gone through the awkward process of redeeming your coupon. You have to print out the daily deal, remember to bring the printout with you and give it to the cashier, who may or may not be trained on how to redeem it. Plus, pulling out a coupon isn't necessarily something you want to do on a date. SCVNGR and American Express believe that they have found the solution.

Wooshii Recent projects See examples of recent projects completed by our community. Animations and explainer videos that showcased a product A claymation product video Testimonial video to profile our company Earn Money for Web User Testing - UserTesting What do I need to get started? A PC or Mac, an internet connection, and a microphone. You’ll need an iPhone, iPad, Android phone or Android tablet If you’d like to take Mobile tests Ability to download our testing software You must be at least 18 years old Ability to speak your thoughts aloud in English SCVNGR Pilots New Hybrid Mobile App for Local Merchant Deals With Game Mechanics Location-based mobile game startup SCVNGR is releasing Thursday a second mobile application for iPhone and Android called LevelUp. This release is meant to serve as a pilot in the Boston and Philadelphia areas and test a new approach to merchant deals that better drive customer loyalty. LevelUp plays in the same sandbox as Groupon , LivingSocial and the myriad of other daily deals sites, but the product attempts to reengineer the formula with game mechanisms and location — two areas SCVNGR knows well — to benefit both the consumer and the merchant. “LevelUp is a new type of location-based interaction. It combines the best parts of the check-in, the challenge, and the reward into one bite-sized unit,” says SCVNGR founder Seth Priebatsch.

Freelance Transcription Introduction Brief Home-based job, work at your convenience $10/audio hour pay rate, USD Short files, 6 minutes or less 2 hours TAT for each file Promotion to Reviewer if performance is good Monthly Bonus of $10 for every 3 hours completed No obligations, no monthly commitments or withdrawal limits We don't assign; instead you pick and choose the files to work on Overview Scribie.com offers a great opportunity to augment your income with a home-based online transcription job. You can enroll with us as a freelance transcriber and earn hourly for the work done.

Ou Topos » Blog Archive » Twitter’s CPM Posted: September 7th, 2010 | Author: Sami | Filed under: The Disruption of Marketing | Tags: cpm, reduction, sale, twitter, Uniqlo | 1 Comment » Uniqlo does it again with Lucky Counter campaign. The fashion retailer asks people to promote their favorite Uniqlo items via Twitter against price reduction for the said item of – estimating from my experience – 0,01% per tweet. This inspired me to a small calculation: if one tweeting Briton has 126 followers on average, and we assume that any given tweet is seen by 1/10 of followers = 13 followers on average, we can derive that 77 tweets are needed for 1000 people to see the message.

QuickTate : Transcribers Thank you for your interest in typing and analyzing files for Quicktate and iDictate! Who we are Quicktate transcribes voicemail messages, memos, letters, legal files, medical files, recordings of phone calls, conference calls and other audio files. Quicktate also audits, summarizes, evaluates and analyzes audio recordings and phone conversations. Say Hello to Groupon Now & Right Here, Right Now Deals Groupon has just launched Groupon Now, the company's much-anticipated time-based deals app that wants to redefine how society eats and shops. Groupon Now, which was first revealed in March, is a simple application within Groupon's mobile apps that gives a user the ability to find local deals in realtime. This is accomplished by mapping a list of time-specific daily deals in the user's vicinity. These daily deals can last anywhere from a few hours to a full day, depending on when and how long a business wants to run a deal.