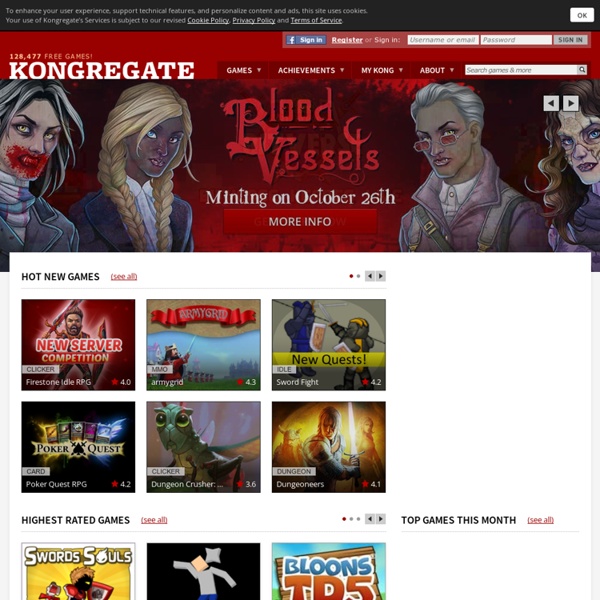 Ultima4 Building Worlds for the Web Thank you for visiting Phi Psi Software. If you are looking for the Flash version of Ultima IV, it is no longer available for download from this website. We received a Cease and Desist notice from Electronic Arts, which owns the copyright for the game, on March 11, 2011. Ultima IV can be found for free on other sites mentioned in this article here. As to the timing of the cease and desist, I will not speculate.

Crossword Puzzle Games - Create Puzzles Create A Crossword Puzzle Enter up to 20 words and hints (clues) below to create your own puzzles. There's no need to use all 20 words, you could use as little as two. Hints can be left blank. NESbox - play NES, SNES, SEGA games online! NESbox is an emulator of NES, Super Nintendo, Sega Mega Drive video consoles, built on Adobe Flash technology and it can only be run directly in your browser's window. View on GitHub What can I do on the website now? If you have ROM files you can load them into the emulator and play. But if you don't know where to find ROM files try to use our experemental opensource service Nesbox Time.

Synthetic Reality Well of Souls How to Play I think most people appreciate having their hand held for the first few moments in a new environment. So let's just walk through the first little bit together... Well of Souls is a Role Playing Game (RPG) which means you will be creating a character and working hard to raise its level until finally it is a mighty force with which to be reckoned. Bel-Air (Fresh Prince) About To Bel-Air, when used as a verb, means to copy a story that another Inter user has posted online and switch out the last half of the story with the lyrics to opening theme song of “The Fresh Prince of Bel-Air,” an American sitcom series starring Will Smith as a street-smart teenager from West Philadelphia who lives with his relatives in Bel Air. On 4chan, the lyrics of opening theme song is used as a popular “bait and switch” copypasta. Origin

10 Weird NES Game Glitch Moments Remember playing Nintendo as a kid and all of a sudden the game looked kind of funny on the screen? Usually that meant there may have been dust in the cartridge or the game was simply crapping out. I can recall playing entire levels where the game scenery was all messed up and you basically had to play the game based on your memory of what the boards looked like. Synonym Card Game There are 30 pairs of synonyms here (for a total of 60 cards) that can be used to play the games Fish and Memory. Students have to find the synonym card to the one that they have. The synonym pairs covered here are: large/big, tiny/small, noisy/loud, silent/quiet, quick/fast, sick/ill, leap/jump, push/shove, pull/tug, sprint/run, afraid/scared, spooky/scary, cold/chilly, home/house, rock/stone, garbage/trash, rug/carpet, kid/child, clever/smart, happy/glad, street/road, and throw/toss. You can use the game Fish or memory to practice this game. Fish goes likes this:

Archanoid DEMOLITION - Android Apps on Google Play You're going for a ride - from the creators of FRUIT NINJA! One of the hottest mobile games in the world is now available free on Google Play! ** Winner ** - Pocket Gamer - Best Action/Arcade Game 2012- Pocket Gamer - Overall Game of the Year 2012 - Gamasutra Mobile Game of 2011 - Game Revolution Best Mobile Game 2011 Suit up with a selection of the coolest jetpacks ever made and take to the skies as Barry Steakfries, the lovable hero on a one-way trip to adventure! From the creators of the worldwide phenomenon Fruit Ninja comes the action-packed Jetpack Joyride, Halfbrick's most anticipated Android game ever!

4 Seemingly Simple Video Games That Are Surprisingly Deep One of the coolest things about video games is that they vary greatly in time investment — compare pick-up-and-play mobile games to RPGs that can take dozens of hours to complete. So-called “hardcore gamers” may scoff at the elementary nature of games available on some platforms, while casual players may feel intimidated by more serious gaming. However, it may surprise you that many games exist that can be easily enjoyed by players of any skill level, yet are deep enough to allow for an advanced play style. Let’s take a look at some of these games, and find ways that you could rediscover some of your favorites! Super Smash Bros. Melee (Nintendo GameCube)

Schrute Facts fourtoe: Woo! So x atheist x!!!I have been barefoot 99% of my life now that I am no longer in school.Also, is it bad to have my plate number on the internet like this? I bought another FSM emblem for my car. Mass Effect 2 Guide This page contains a walkthrough for the main missions of Mass Effect 2. Major changes in the gameplay from Mass Effect are listed in the main Mass Effect 2 page, while the effects of importing a saved game from Mass Effect are listed in the Save File Transfer page. Prologue Edit Games Crossword GameJust like an old-fashioned word search! Using the mouse and the wordlist, find and highlight the hidden English words in the box! As the levels get harder, the words start appearing in different orientations. But hurry, the clock is running!

G2A.COM Marketplace How does it work in practice Copy your Unique Token Contact our Support Verify your token live The refund process will be completed within 72 hours. That time is needed for a detailed verification. Canasta: rules and variations of the card game Introduction The game of Canasta is said to have originated in Montevideo, Uruguay in 1939 (see for example Philip E Orbanes' article The Canasta Story). From there it spread to Argentina, the USA and throughout the world. It was extremely fashionable in the 1950's, threatening for a while to displace Contract Bridge as the premier card game. The rules were standardised in North America around 1950, and it was this version of the game, which will be called Classic Canasta on this page, that gained worldwide popularity.

Lvl 21 and 3097 points here. I don't grab up levels like I used to, though. I'm hoping to one day make my own games for it. by farfetchedchild Jan 6

I am very glad that people find this interesting. And yeah this site is just awsome. by giacomo Jan 13

i know, right? i am a writer and sometimes i need a quick diversion. thanks for the comment. by dasouthern Jan 13

This site is a great thing for new developers, and there is always new games to acquire badges and quests. I personnally am level 26 with over 7,000 points. by ashcashcash Jan 13