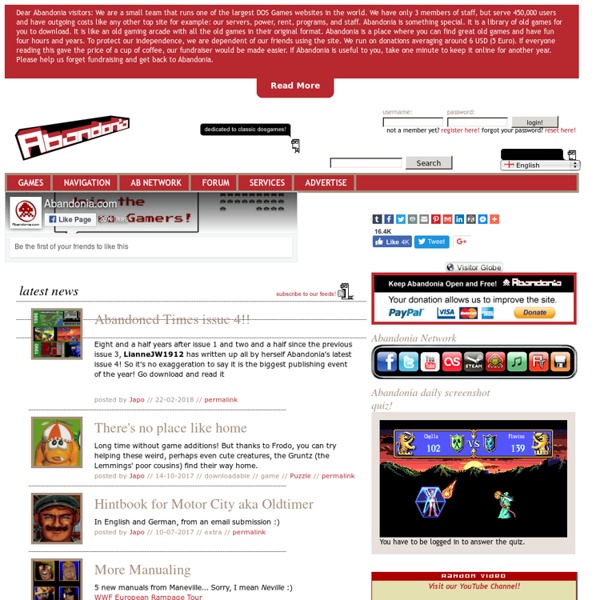 Monster exterminators wanted! The city of Phlan, once a flourishing trade port, is becoming overrun with monsters of all sorts... and rumor has it that they have amassed a quite spectacular hoard from pillaging the city! This is where you come in, brave adventurers: drive them out of the city and loot their coffers... or die trying. Pool of Radiance was the first of many Advanced Dungeons & Dragons, or AD&D for short, role-playing games published by Strategic Simulations, Inc. back in the day, a series that would become known as the famed Gold Box games, named after the gold-colored boxes they came in. So, dear player, look up why negative Armor Class is suddenly good and what the heck THAC0 means, roll your die, and go kill some monsters and steal all their money!

Games: Master of Orion II Master the unknown before it masters you Now Available! Imagine a world where population growth is outstripping planetary resources, where the need for galactic expansion is critical, and where as the ruler, you must defend your empire while guiding a team of pioneers on a search for life-sustaining resources. Many other races are experiencing the same internal pressure to expand, but the galaxy is only so large. You will need to lead your people into other star systems quickly, securing the space and resources that will guarantee your supremacy. But that's not all: banished from Orion, the Antaran race lurks in the darkness.

ModDB’s Top 100 Indie Games and Mods of 2009 « DIYgamer Polls closed yesterday for the first phase of the 2009 Mod and Indie Game of the Year competition, and today ModDB released the list of the top 100. Voting on this second list is open until Feb. 21, so anyone planning to vote has plenty of time to go over the list and pick their three favorite items. The same rules apply for the second phase; anyone can vote, but ModDB users’ votes carry more weight. Mac Vs PC - Best Commercials logo login Mac Vs PC - Best Commercials Smartly written and acted... Read more Unbelievable Invention Of The New CenturyThey've managed to invent the bicycle again!Read more BMX You Have Not Seen Before!

Tension Game - News Life in the Void made easy One of the Void dwellers took the effort of making the life of other Young Ones easier. Predators are less powerful, the Brother's are weakened, the Sisters are more willing to open to you and the gardens will be ready to be re-planted almost instantly. Download the Void easy and medium patch and see total list of changes here:viewtopic.php?p=101816#p101816 Made by Throdax. freeware of 2010 « reasons why it’s worth to be a pcgamer Below is a list of worthwhile freeware games released so far in 2010. Since all those games are free I didn’t use any truly harsh criteria For those games I didn’t play myself a positive opinion on either one of the source sites was good enough for me to include them on the list. -What does this sign mean?

10 Weird NES Game Glitch Moments Remember playing Nintendo as a kid and all of a sudden the game looked kind of funny on the screen? Usually that meant there may have been dust in the cartridge or the game was simply crapping out. I can recall playing entire levels where the game scenery was all messed up and you basically had to play the game based on your memory of what the boards looked like. In other cases you’d be playing a game and a big “WTF?” would pop into your head because you saw something you probably shouldn’t have seen. Alternate reality game An alternate reality game (ARG) is an interactive networked narrative that uses the real world as a platform and uses transmedia storytelling to deliver a story that may be altered by players' ideas or actions. The form is defined by intense player involvement with a story that takes place in real time and evolves according to players' responses. Subsequently, it is shaped by characters that are actively controlled by the game's designers, as opposed to being controlled by artificial intelligence as in a computer or console video game. Players interact directly with characters in the game, solve plot-based challenges and puzzles, and collaborate as a community to analyze the story and coordinate real-life and online activities. ARGs generally use multimedia, such as telephones, email and mail but rely on the Internet as the central binding medium. Defining alternate reality gaming[edit]

Ultima4 Building Worlds for the Web Thank you for visiting Phi Psi Software. If you are looking for the Flash version of Ultima IV, it is no longer available for download from this website. We received a Cease and Desist notice from Electronic Arts, which owns the copyright for the game, on March 11, 2011. Master of Orion 2! - OverClocked ReMix Forums Here are some tips on MOO2, based on my own experience: 1. Start at an easy level, like "Easy" or "Normal" 2. Larger galaxies are generally easier.

Kholat : ZODIAC - Every Game is a Star Extra Game details Genre: Sci-Fi AdventureDeveloper: IMGN.PROPlatform: WindowsYear of release: 2015 Science Fiction Thriller Batman: Arkham Asylum – Riddler Guide Defeating Joker is just the beginning. For the so-called World’s Greatest Detective, the real foe is Edward Nigma, aka The Riddler. The real challenge lies in unraveling his devious schemes and in deciphering his insidious puzzles. Do you want to reach 100%? Do you want an extra 255 Achievement points? TitanIM - The Future of Simulation TitanIM is capable of recreating planetwide environments from ocean floors to Earth’s orbit at equally high fidelity for any point between. Using the powerful Outerra rendering engine, blades of grass and dirt roads are as eye-pleasing as in any major video game, yet the view from 50,000 feet altitude is suitable for a high-end simulator. Air, Land, Sea and Space are not separate concepts in TitanIM; they are an uninterrupted continuum, and TitanIM is equally capable of operating anywhere in that scale – or in all domains at once.