The Pirate Bay - The galaxy's most resilient bittorrent site 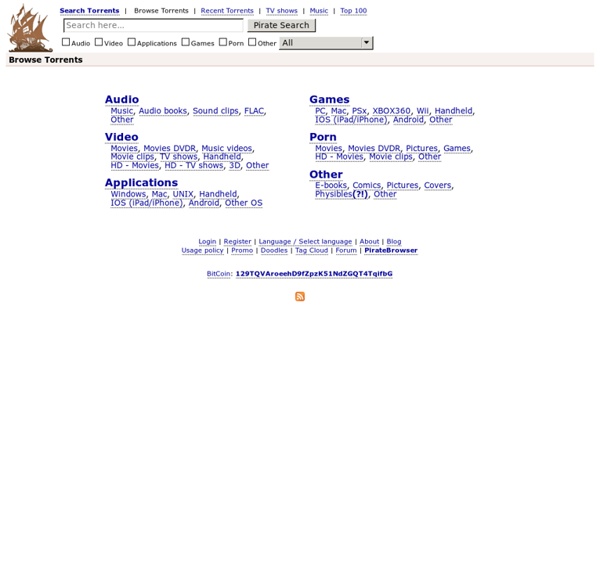 Useful YouTube Vids This page is designated be an index to all of the other useful video pages on this site that are filled with great YouTube Videos that I have reviewed and found to be highly useful and related to the topics of this site. Wilderness Survival Videos Wilderness Survival Videos – Page 1 Can I use... Support tables for HTML5, CSS3, etc About "Can I use" provides up-to-date browser support tables for support of front-end web technologies on desktop and mobile web browsers. The site was built and is maintained by Alexis Deveria, with occasional updates provided by the web development community. The design used as of 2014 was largely created by Lennart Schoors. May I use your data in my presentation/article/site, etc?

Researchers uncover 8,000 years of human history hidden in the Middle East Which would be interesting, seeing as, when interpreted literally, the Bible also claims that the universe was created between 6000-8000 years ago. Which is problematic, to say the least. EDIT: Not to mention the mental gymnastics required to reconcile the (presumably) carbon dating of the earliest Mesopotamian settlements to 8000 years ago and the fact that that same dating methods go on to describe artifacts and fossils that are up to 40 000 years old. As I recall, Asimov hypothesized that the age of creation used in the Bible is actually linked to the point at which we (or rather Near Eastern peoples) began recording history in the form of writing. Not sure how strong his evidence was but it sounds reasonable intuitively.

filter CSS Filters are a powerful tool that authors can use to achieve varying visual effects (sort of like Photoshop filters for the browser). The CSS filter property provides access to effects like blur or color shifting on an element’s rendering before the element is displayed. Filters are commonly used to adjust the rendering of an image, a background, or a border. The syntax is: Where blur()brightness()contrast()drop-shadow()grayscale()hue-rotate()invert()opacity()saturate()sepia()url() - for applying SVG filterscustom() - "coming soon" Surreal video works This video by Sam Spreckley is called 'Surface ii' and is a combination of 8mm film being destroyed and some awesome sound effects. The perfect collaboration of vague sounds with surreal images makes this video a great piece of art. The video below is called 'Oil and Water' and is also a definite recommendation!

Xah's JavaScript Tutorial This is a example based JavaScript tutorial, from beginner to master. This tutorial is written with simplicity in mind, with lots examples, covering the core technologies you need to know in writing web apps. After reading this tutorial, you'll be able to lookup references and code any JavaScript project and create web applications. I assume you already know a language, such as Python, Ruby, Perl, PHP, Java. The 20 Best Cartoons Of The 90's The 90's were a golden age of cartoons. We had a blast putting together the 20 best, and we're sure this list will inspire some discussion. Our only criteria was that the cartoon had to start in the 90's, meaning a couple of very late in the decade entries were still eligible. We did make a small exception for one show, but we think you'll agree it was warranted. Enjoy! 20.

Why Learning to Code is So Damn Hard Quincy Larson was just a "guy in a suit in an office" and decided he wanted to learn how to code. So he asked around. He started by picking up a bit of Ruby then found himself skimming through other languages like Scala, Clojure and Go. He learned Emacs then Vim and even the Dvorak keyboard layout. He picked up Linux, dabbled in Lisp and coded in Python while living on the command line for more than half a year. Like a leaf in a tornado, the advice Quincy received jerked him first one way and then another and then another until he'd finally taken "every online course program imaginable".