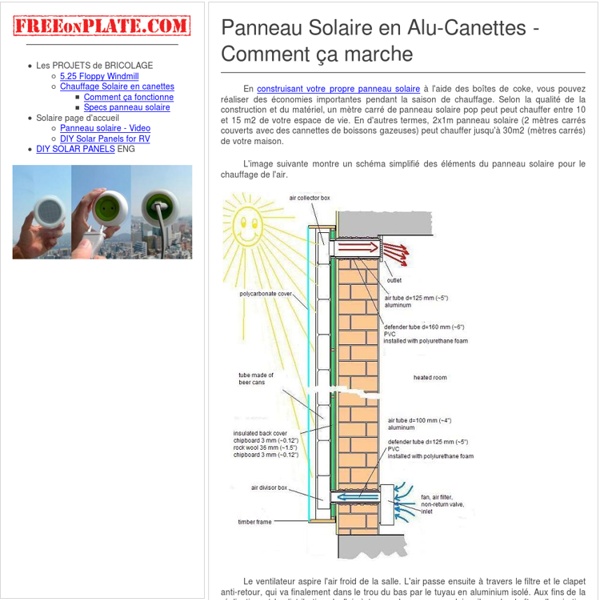 Welcome to The Sietch - Projects Build Your Own Solar Thermal Panel After our first attempt at a home built proof of concept solar thermal panel, we were a bit disappointed with the results. It took about 4 hours before the thing started work, and was a bit costly (at over 50 dollars) to make. I knew it could be done better and cheaper.

About - Emily Cummins When I was four, my Grandad gave me a hammer and began to teach me how to make toys from scraps of materials found in his garden shed. I loved the fact that we could make something out of seemingly random bits, and my interest in sustainable design was born. As I got older I learnt about the properties of different materials and became more experienced in using a range of tools. Now I'm 27 and my latest innovation is a sustainable fridge which is 'powered' by dirty water but keeps medicines or small food items clean, dry and cool. Apprendre la menuiserie Avec Manjini Jayaraman Manjini Jayaraman is a furniture specialist from India who has over thirty five years of experience in the woodworking industry. He lives in the southern city of Pondicherry and hails from a fishing community that has faced hardship in recent times.

Make A Cheap & Easy Solar USB Charger With An Altoids Tin Photos by Joshua Zimmerman The craftster behind the very popular $3 solar-powered emergency radio is back with a new awesome project: a cheap solar battery charger with a USB plug. Zimmerman wrote, saying that he saw a lot of small solar powered chargers being talked about over Earth Day, but there was a big problem: "They're all quite nice, but also quite expensive. How I built an electricity producing Solar Panel Several years ago I bought some remote property in Arizona. I am an astronomer and wanted a place to practice my hobby far away from the sky-wrecking light pollution found near cities of any real size. In my attempt to escape city slicker yuppies (you know the kind, the ones that like to blab loudly on their cell phone while they work on some business administration degree in a cyber cafe somewhere in Trendyland.) and their light pollution, I found a great piece of remote property.

Homemade Solar panels At the end, the solar absorber is painted black and placed in the diy solar panels casing. The casing is covered with plexiglass that we attach to the frame and thoroughly corked with silicone. Polycarbonate / plexiglass is slightly convex in order to gain greater strength. You can see installed solar absorber without plexiglass in picture 18. Complete solar collector is shown on Picture 19, and finally, installed solar system can be seen in Picture 20. The following page shows complete specification of parts and material needed for building diy solar panels.

Window Socket – Solar Energy Powered Socket by Kyuho Song & Boa Oh The Window Socket offers a neat way to harness solar energy and use it as a plug socket. So far we have seen solutions that act as a solar battery backup, but none as a direct plug-in. Simple in design, the plug just attaches to any window and does its job intuitively.