Educational Technology and Mobile Learning: Some Very Good iPad Apps Activities and Lesson Ideas to Use in Class with Your Students. January 11, 2016 It’s not only about apps but what you can do with these apps in your classroom that matter more and this is where Apps in the Classroom series comes in handy. 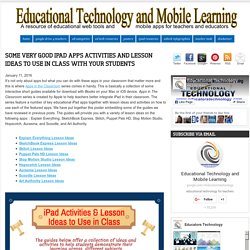 This is basically a collection of some interactive short guides available for download with iBooks on your Mac or iOS device. Apps in The Classroom series is created by Apple to help teachers better integrate iPad in their classroom. The series feature a number of key educational iPad apps together with lesson ideas and activities on how to use each of the featured apps. We have put together this poster embedding some of the guides we have reviewed in previous posts. The guides will provide you with a variety of lesson ideas on the following apps: : Explain Everything, SketchBook Express, Skitch, Puppet Pals HD, Stop Motion Studio, Hopscotch, Aurasma, and Scoodle, and Art Authority.

iResources. Pushbullet - Your devices working better together. Cross-Curricular. Best EdTech Apps of 2014. 2014 was a terrific year for learning apps. 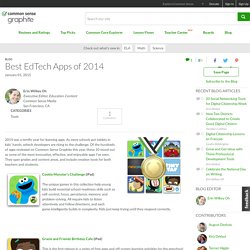 As more schools put tablets in kids' hands, edtech developers are rising to the challenge. Of the hundreds of apps reviewed on Common Sense Graphite this year, these 10 stood out as some of the most innovative, effective, and enjoyable apps I've seen. They span grades and content areas, and include creation tools for both teachers and students. Cookie Monster's Challenge (iPad) The unique games in this collection help young kids build essential school-readiness skills such as self-control, focus, persistence, memory, and problem-solving. 10 Apps to Teach You Another Language.

With high school Spanish classes long behind us, sometimes we have to take learning a new language into our own hands. 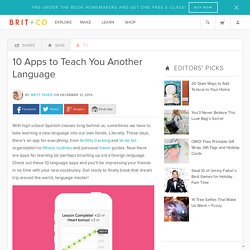 Literally. These days, there’s an app for everything, from fertility tracking and to-do list organization to fitness routines and personal travel guides.

iOS 8. 5 Design Tools to Spark Imagination and Promote Creativity. One of my favorite things about working with students is their ability to routinely blow my mind. 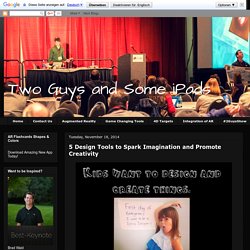 Amazing things happen when students are given the opportunity to use their imagination, and think outside the box with no fear of failure. Give your students access to the 5 tools below, and let them blow your mind! Tinkercad 3D Modeling is a very difficult skill to learn. Believe me, I've spent many hours trying.

Vidback - Messages You Can See. Lesson/Ideas. 5 Lessons Drawn from the LAUSD iPad Fiasco. It’s becoming difficult to read the news in Los Angeles these days without running across yet another article about the problems faced by the sputtering LAUSD iPad initiative. 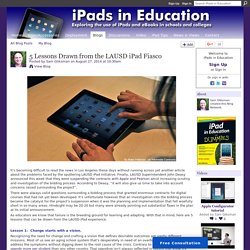 Finally, LAUSD Superintendent John Deasy announced this week that they were suspending the contracts with Apple and Pearson amid increasing scrutiny and investigation of the bidding process. According to Deasy, “it will also give us time to take into account concerns raised surrounding the project”. There were always valid questions surrounding a bidding process that granted enormous contracts for digital courses that had not yet been developed. It’s unfortunate however that an investigation into the bidding process became the catalyst for the project’s suspension when it was the planning and implementation that fell woefully short in so many areas.

Hindsight may be 20-20 but many were already pointing out substantial flaws in the plan at its initial announcement. Lesson 1: Change starts with a vision. What you should know about iPad cases - Innovation: Education. Getting mobile devices into the hands of educators and students is the name of the game, but what happens after to keep those iPads up and running? 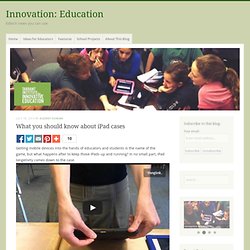 In no small part, iPad longetivity comes down to the case. Over the past three years, we’ve operated a lending library of 10-20 iPads for educators, which has so grown in popularity that this past year hardly a day went by when the devices were actually back at home base. They went to Danby, they went to Cabot. They went to Morrisville, and the Echo Lake Aquarium. They went to AMLE, VT Fest and the Middle Grades Institute.

ELA. WhatWasThere Reviews. Install WhatWasThere and your iPhone or iPod Touch becomes a portable portal into the past! 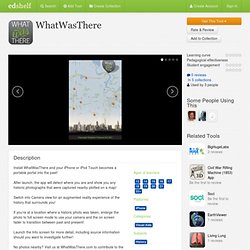 After launch, the app will detect where you are and show you any historic photographs that were captured nearby plotted on a map! Switch into Camera view for an augmented reality experience of the history that surrounds you! If you’re at a location where a historic photo was taken, enlarge the photo to full screen mode to use your camera and the on screen fader to transition between past and present! Launch the Info screen for more detail, including source information should you want to investigate further! Chromville Reviews. Osmo. 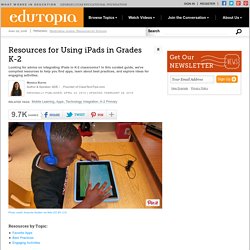 Scoodle Jam - Collaborative Whiteboard for Student Creators with Common Core-Aligned Content on the App Store. Virtual Nerd Mobile Math on the App Store. Blooms, SAMR & the 3 C's - iSupport. All the apps you’ll ever need As I prepared for an upcoming presentation at a local University I unloaded my test iPad of all its applications and created a new iPad, complete only with apps which I use at school every week. 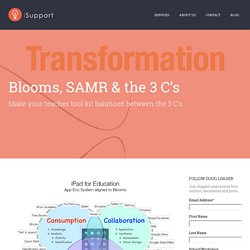 This iPad would become my “essentials” iPad, strategically and efficiently full of apps I wholly recommend to every educator I meet. I went through the apps and I developed a list, indicating the apps purpose. I found that these purposes consistently fell into 3 categories: Consumption, Creation and Collaboration.