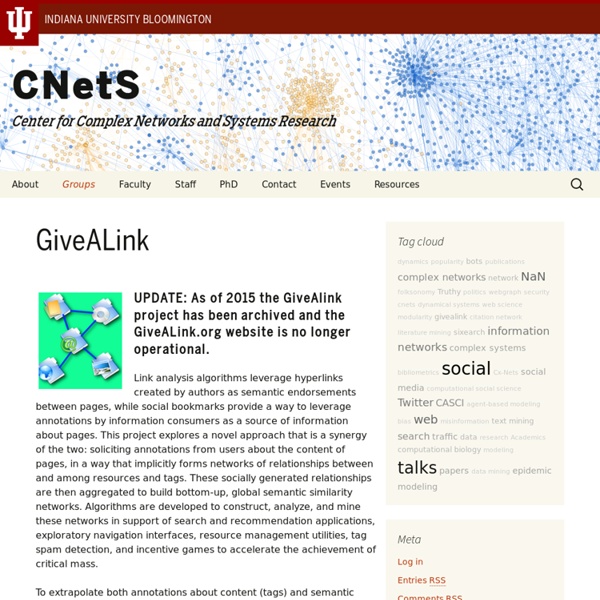 UPDATE: As of 2015 the GiveAlink project has been archived and the GiveALink.org website is no longer operational. Link analysis algorithms leverage hyperlinks created by authors as semantic endorsements between pages, while social bookmarks provide a way to leverage annotations by information consumers as a source of information about pages. This project explores a novel approach that is a synergy of the two: soliciting annotations from users about the content of pages, in a way that implicitly forms networks of relationships between and among resources and tags. These socially generated relationships are then aggregated to build bottom-up, global semantic similarity networks. Strategic collaborations to share data, accelerate evaluation, and maximize impact are under way with key groups in Europe through the TAGora Project and its partners at Rome Sapienza, Sony Paris, the ISI Foundation in Torino, and the BibSonomy group at Kassel University. Project Members Collaborators & Alumni: Related:  Complex Networks Abound

X 4, 021014 (2014) - Driving Interconnected Networks to Supercriticality In the age of Facebook, Twitter, and email, the phenomena of a story, an idea, or a certain behavior going “viral” are commonplace. But, viewed scientifically, such phenomena are far from being trivial. First of all, the underlying mechanisms have certain degrees of unpredictability, or randomness. Moreover, the structure of human connectivity that enables such viral spreading (or “diffusion”) is actually composed of many layers of networks arbitrarily interconnected. Very little is known about the basic scientific properties of viral spreading processes taking place in interconnected multilayer networks. We find that features of diffusion processes in interconnected networks strongly depend on the relation of proportionality between the numbers of connections that nodes have in different layers. Our findings have direct applicability in the design and control of real interconnected systems. Subject Areas

Networks of Networks: The Last Frontier of Complexity Contributions from leaders in the field of Network Science Encapsulates developments in this emerging field in a clear manner Interdisciplinary fields are represented The present work is meant as a reference to provide an organic and comprehensive view of the most relevant results in the exciting new field of Networks of Networks (NetoNets). Seminal papers have recently been published posing the basis to study what happens when different networks interact, thus providing evidence for the emergence of new, unexpected behaviors and vulnerabilities. From those seminal works, the awareness on the importance understanding Networks of Networks (NetoNets) has spread to the entire community of Complexity Science. Content Level » Research Related subjects » Complexity - Game Theory / Mathematical Methods Table of contents / Preface / Sample pages Popular Content within this publication Show all authors Hide authors

Complex Networks Complex Networks Complex Networks are everywhere. Many phenomena in nature can be modeled as a network, as brain structures, protein-protein interaction networks, social interactions and the Internet and WWW. All such systems can be represented in terms of nodes and edges indicating connections between nodes. In Internet, for example, the nodes represent routers and the edges the physical connections between them. In the same way, in transport networks, the nodes can represent the cities and the edges the highways that connect them. An important characteristic of these networks is that they are not random, but have a more structured architecture. In this site we provide some resources for the study of complex networks. L. da F. University of São Paulo - USP Institute of Physics at São Calos - IFSC Brazil