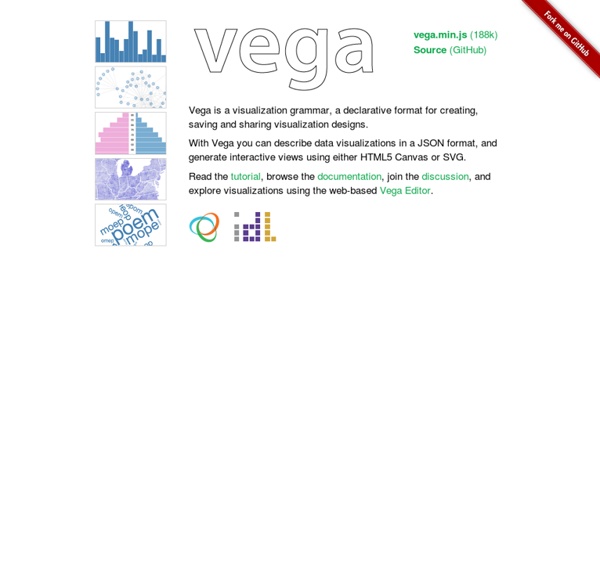 Dataseed Interactive Data Visualization | Wordle - Beautiful Word Clouds The 36 best tools for data visualization | Web design It's often said that data is the new world currency, and the web is the exchange bureau through which it's traded. As consumers, we're positively swimming in data; it's everywhere from labels on food packaging design to World Health Organisation reports. As a result, for the designer it's becoming increasingly difficult to present data in a way that stands out from the mass of competing data streams. Get Adobe Creative Cloud One of the best ways to get your message across is to use a visualization to quickly draw attention to the key messages, and by presenting data visually it's also possible to uncover surprising patterns and observations that wouldn't be apparent from looking at stats alone. As author, data journalist and information designer David McCandless said in his TED talk: "By visualizing information, we turn it into a landscape that you can explore with your eyes, a sort of information map. There are many different ways of telling a story, but everything starts with an idea.

Parallel Sets Parallel Sets (ParSets) is a visualization application for categorical data, like census and survey data, inventory, and many other kinds of data that can be summed up in a cross-tabulation. ParSets provide a simple, interactive way to explore and analyze such data. Even though the screenshots here show the Mac version, the program also runs on Windows and Linux. Links to the executables are in the Download Section. Basic Operation To open an existing dataset, select it in the list and either double-click it or click the Open button. The horizontal bars in the visualization show the absolute frequency of how often each category occurred: in this example, the top line shows the distribution between the passenger classes on the Titanic and the crew. The middle dimension shows a male to female ratio of almost 4 to 1. Between the dimension bars are ribbons that connect categories and split up. Interaction Move your mouse over the display to see the tooltip telling you more about the data.

Gephi, an open source graph visualization and manipulation software Data visualisation DIY: our top tools | News What data visualisation tools are out there on the web that are easy to use - and free? Here on the Datablog and Datastore we try to do as much as possible using the internet's powerful free options. That may sound a little disingenuous, in that we obviously have access to the Guardian's amazing Graphics and interactive teams for those pieces where we have a little more time - such as this map of public spending (created using Adobe Illustrator) or this Twitter riots interactive. But for our day-to-day work, we often use tools that anyone can - and create graphics that anyone else can too. So, what do we use? Google fusion tables This online database and mapping tool has become our default for producing quick and detailed maps, especially those where you need to zoom in. The main advantage is the flexibility - you can can upload a kml file of regional borders, say - and then merge that with a data table. This excellent tutorial by Google's Kathryn Hurley is a great place to start. Datamarket

Demos - JavaScript InfoVis Toolkit JavaScript InfoVis Toolkit Create Interactive Data Visualizations for the Web Home ● Download ● Builder ● Donate Area, Bar and Pie Charts Sunburst Icicle ForceDirected TreeMap SpaceTree RGraph HyperTree Advanced/Other copyright © 2013 SenchaLabs - Author: Nicolas Garcia Belmonte D3.js D3.js (or just D3 for Data-Driven Documents) is a JavaScript library that uses digital data to drive the creation and control of dynamic and interactive graphical forms which run in web browsers. It is a tool for data visualization in W3C-compliant computing, making use of the widely implemented Scalable Vector Graphics (SVG), JavaScript, HTML5, and Cascading Style Sheets (CSS3) standards. It is the successor to the earlier Protovis framework.[2] In contrast to many other libraries, D3 allows great control over the final visual result.[3] Its development was noted in 2011,[4] as version 2.0.0 was released in August 2011.[5] Context[edit] The first web browsers appeared in the early 1990s. They were initially capable of displaying static web pages only: the only way for a user to interact with the web was through clicking links and scrolling pages. In 2011, the development of Protovis was stopped to focus on a new project, D3.js. Technical principles[edit] Selections[edit] Transitions[edit]

Dynamic D3 with Knockout.js A couple of things happened recently that prompted me to write this blog post. Firstly, I’ve been playing around with HTML5/javascript based user interfaces and data visualisation. Secondly, I watched a fascinating presentation from UX guru Brett Victor, making me wonder if it was possible to create an interactive, data-drawing app like the one he demonstrates, purely with Javascript. There are 2 well established JS frameworks that we could combine to help us here: Knockout.js and D3. But can we make them work well together? The pieces – Knockout I assume you know roughly what Knockout.js and D3 are. Here’s a trivial view model that exposes an observable string: Which we can then bind to something in our view/HTML: Now whenever the view-model is updated, either in code (viewModel.foo("blah")) or by binding it to a control that accepts input, our UI will automatically reflect the change. D3 is a library for creating data-driven documents. Phew. Of course, that’s just scratching the surface.