Church of the Nazarene specific

What makes you happy? – The Lebanon Life. It’s been almost 11 years ago….. 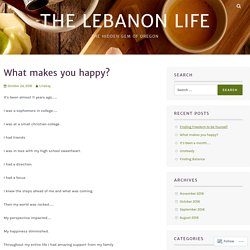 Children in the midst of war – Central Europe Field. Story He was a 16 year-old Syrian boy in an adult body. 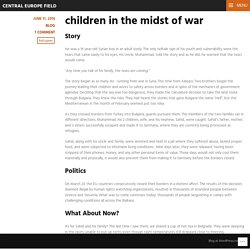 Nampa theologian writes book addressing coexistence of God and evil. NAMPA — The year he was a freshman in college, seven people Thomas Jay Oord knew died and he confronted the problem of evil. 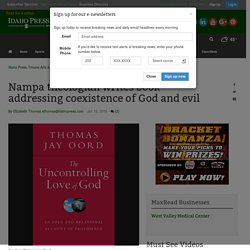 If there truly is a loving God, he wanted to know, why is there still evil in the world? His latest theology book, “The Uncontrolling Love of God,” gives his answer, gained after many more years of both positive and negative experiences. By the time Oord was a senior in college finishing up a degree in Christian theology, he had become an atheist. Extensive reading and study, as well as probing questions from nonbelievers, had taken its toll.

“In the name of honesty,” Oord said, “at that time I couldn’t believe in God anymore.” Story continues below video Video: Ukrainian Pilot Gets 22 Years In Russian Prison For Mortar Strike That phase did not last long, however. An Interview with Thomas Jay Oord about "The Uncontrolling Love of God" My Response to Christianity Today Review · For The Love of Wisdom and The Wisdom of Love · Thomas Jay Oord. I thank Derek Rishmawy for his Christianity Today review of my new book, The Uncontrolling Love of God. 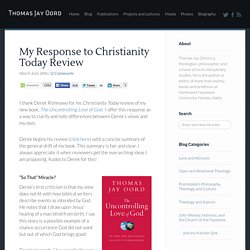 I offer this response as a way to clarify and note differences between Derek’s views and my own. Derek begins his review (click here) with a concise summary of the general drift of my book. This summary is fair and clear. I always appreciate it when reviewers get the overarching ideas I am proposing. Kudos to Derek for this!

“So That” Miracle? Derek’s first criticism is that my view does not fit with how biblical writers describe events as intended by God. Derek responds, “Jesus explicitly says that the man was born blind ‘so that the works of God might be displayed in him’ (v. 3). I understand Derek’s thinking here. Endangered Speeches: Why It Matters (For All of Us) That Conservative Seminaries Are Firing Professors Over Theology. Summer is a predictable time for academic migrations. 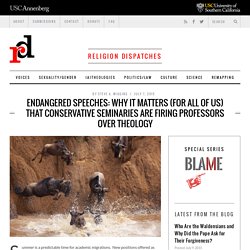 New positions offered as early as last fall are now approved and finalized, and those who’ve been selected begin the transhumance of the professorate like a great herd of intelligent wildebeests. Actually, a very small herd. Pro-Evolution Tenured Professor Laid Off from Nazarene University... What the Hell is Going on at NNU? Thomas J. 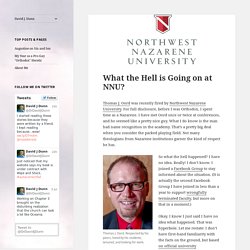 Oord was recently fired by Northwest Nazarene University. For full disclosure, before I was Orthodox, I spent time as a Nazarene. I have met Oord once or twice at conferences, and he seemed like a pretty nice guy. CHRIS ESTEP: Nazarene schools and the cost of conformity. The past few months have seen a series of controversies within the Church of the Nazarene, especially discussing theological conversation on Nazarene university campuses. 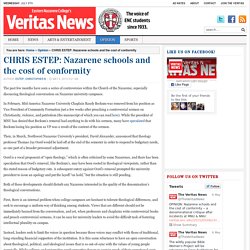 In February, Mid-America Nazarene University Chaplain Randy Beckum was removed from his position as Vice President of Community Formation just a few weeks after preaching a controversial sermon on Christianity, violence, and patriotism (the manuscript of which you can read here). While the president of MNU has denied that Beckum’s removal had anything to do with his sermon, many have speculated that Beckum losing his position as VP was a result of the content of the sermon. Then, in March, Northwest Nazarene University’s president, David Alexander, announced that theology professor Thomas Jay Oord would be laid off at the end of the semester in order to respond to budgetary needs, as one part of a broader personnel adjustment. The Risks of Love and Life’s Big Questions · For The Love of Wisdom and The Wisdom of Love · Thomas Jay Oord. A few weeks ago, I was asked to give a public lecture on a complex set of subjects: evolution, evil, and Christian theology. 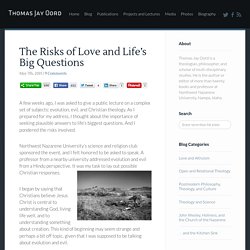 As I prepared for my address, I thought about the importance of seeking plausible answers to life’s biggest questions. And I pondered the risks involved. Northwest Nazarene University’s science and religion club sponsored the event, and I felt honored to be asked to speak. A professor from a nearby university addressed evolution and evil from a Hindu perspective. It was my task to lay out possible Christian responses. I began by saying that Christians believe Jesus Christ is central to understanding God, living life well, and to understanding something about creation. Pinnock, Alzheimer’s, and Open Theology · For The Love of Wisdom and The Wisdom of Love · Thomas Jay Oord. I received sad news in an email recently: Clark Pinnock is suffering from Alzheimer’s disease. 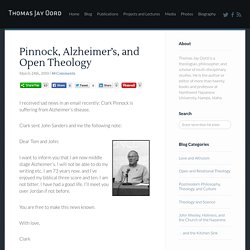 Clark sent John Sanders and me the following note: Dear Tom and John: I want to inform you that I am now middle stage Alzheimer’s. I will not be able to do my writing etc. Open Theology and the Church of the Nazarene · For The Love of Wisdom and The Wisdom of Love · Thomas Jay Oord. Open theology has gained wide attention since the 1990s. 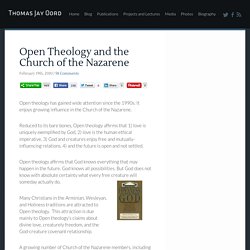 It enjoys growing influence in the Church of the Nazarene. Reduced to its bare bones, Open theology affirms that 1) love is uniquely exemplified by God, 2) love is the human ethical imperative, 3) God and creatures enjoy free and mutually-influencing relations, 4) and the future is open and not settled. Open theology affirms that God knows everything that may happen in the future.

God knows all possibilities. But God does not know with absolute certainty what every free creature will someday actually do. Many Christians in the Arminian, Wesleyan, and Holiness traditions are attracted to Open theology. Interim NNU president discusses moving university past controversy, communicating more effectively. Church of the Nazarene Foundation- Giving. Statement from Thomas Jay Oord. Losing my religion… A few years ago I started pondering the importance of religion. I’m going to be frank and honest in this post. I’m going to try not to be too disjointed. This isn’t about you, or what you believe (except, maybe it is), it’s about me, and where I am at, where I have been, and where I am going (but also maybe where you’re going too). I was born into The Church of the Nazarene, and became a member when I was a teenager. For those who don’t know, Nazarenes are part of the protestant tree. Board of General Superintendents releases statement on same-sex marriage.

Societies across the globe are engaged in conversations to redefine marriage. Media debates, election-day balloting, and governmental court rulings have provided the platform for this redefinition. We believe a biblical view of marriage involves a monogamous, covenantal relationship between a man and a woman. Jesus said, “... At the beginning the Creator ‘made them male and female,’ and said, ‘For this reason a man will leave his father and mother and be united to his wife, and the two will become one flesh’ So they are no longer two, but one flesh. Therefore what God has joined together, let no one separate” (Matthew 19:4-6 NIV). Today the United States Supreme Court, in the 5-4 decision of Obergefell v. Documents detail background in NNU controversy. NAMPA — The decision announced April 8 to shift $1.3 million in Northwest Nazarene University’s budget to increase reserves and lay off six people in the process seemed fairly benign in the beginning.

But within hours of that announcement, a firestorm erupted over one of those layoffs: the popular — though controversial — theology professor Thomas Oord. After a few short weeks, NNU president David Alexander, who was behind the decision, resigned from his post just a few months after his contract had been renewed. But the controversy, and the contention between Oord and Alexander, go far beyond that April announcement. Their history extends to at least 2010, according to documents obtained by the Idaho Press-Tribune. The move to remove Oord — a tenured professor who has many published works and is well known in the Christian community — stirred up a movement of protest on the NNU campus and beyond. Thomas J. Oord Endowed Scholarship.

The Fundamentalist Witch Hunt’s New Prey. With his populism, emphasis on the middle class, and personal likability, the former governor could run the table in the South—and in Social Security he’s found a tailor-made issue. Like all presidential candidates, Mike Huckabee professes to care about working Americans. The Beauty of Love: Learning from Thomas Jay Oord. A STATEMENT FROM DR. RANDY BECKUM. Dr.

Randy Beckum recently gave a statement to the MNU Trailblazer student newspaper. The Trailblazer. Close Page News By Robbie Wegley Feb 12, 2015 "I do not preach “everything” I believe. But, I also do not preach things I don’t believe. AN OPEN LETTER TO THE MNU COMMUNITY. Two weeks ago, Dr. Thanks NNU — Humble Future. Frequently Asked Questions - Northwest Nazarene University. Northwest Nazarene University took action recently to begin a process of change intended to foster growth. Millennials, My Church, and My Hope.

As someone who turns 50 years old in a matter of days (which I confess painfully), I certainly don’t fall into the Millennial category. Dismissal Dismay at NNU. The Trailblazer. Close Page News By Joshua Brisco Apr 17, 2015 “I do not make this statement lightly,” Beckum said. “My heart is heavy for our university. Beckum’s chapel message, which focused on the relationship between American culture and violence, spurred conversation throughout the MidAmerica community. Support NNU. Response from the NNU Board of Trustees - Northwest Nazarene University. Open Theism For Dummies (And C- Students Like Me) #trekon #supporttomoord #Mintersmusings. I often tell my student pastors-to-be, “The worst thing that can ever happen in your church is for God to actually heal someone, postponing the inevitable end awaiting us all.”

And yes, they look at me strangely. But it is indeed the truth. How Do You Fire Thomas Jay Oord? Questioning NNU’s President, Part 2: The Capital Education Marketing Failure. Oord's Termination. Many on the MidAmerica Nazarene campus wonder if chaplain was punished for sermon. Extreme Nazarene Missions. Ric Shewell » Why I Left the Church of the Nazarene. Church of the Nazarene - Global Mission.