The Social Context for Pride and Prejudice 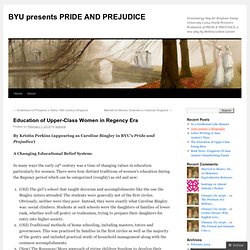 There were four distinct traditions of women’s education during the Regency period which can be categorized (roughly) as old and new: (Old) The girl’s school that taught decorum and accomplishments like the one the Bingley sisters attended. The students were generally not of the first circles. This painting (by Jean Simeon Chardin) shows a Governess and her pupil; one of the most popular types of education for the wealthy.

By the late 18th century (when the characters of Pride and Prejudice were in their early years of schooling), elements of both of the new schools of educational thought often included by the better families in their daughters’ home schooling, and an academic (read: traditionally male) education was not seen as a detriment for young women. Works Cited. Time Period and Culture of Pride and Prejudice. Since one of Austen's favorite themes was satire on the time period in which she lived, it is important to have an understanding of some of the customs, achievements, social expectations, and manners of the Regency period. 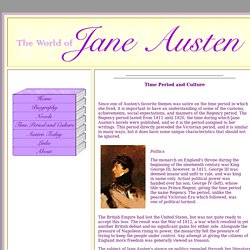 The Regency period lasted from 1811 until 1820, the time during which Jane Austen's novels were published, and so it is the period assigned to her writings. This period directly preceded the Victorian period, and it is similar in many ways, but it does have some unique characteristics that should not be ignored. The British Empire had lost the United States, but was not quite ready to accept this loss. The result was the War of 1812, a war which resulted in yet another British defeat and no significant gains for either side.

Alongside the pressure of Napoleon rising to power, the monarchy felt the pressure of trying to keep the people under control. Society Regency era society was marked by extreme excess in the upper classes and a wide gap between rich and poor. Notes on Education, Marriage, Status of Women, etc. Go to end of notes. 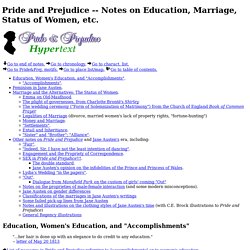 Go to chronology. Go to charact. list. Go to Pride&Prej. motifs. Go to place list/map. Go to table of contents. Education, Women's Education, and "Accomplishments" "...her hair is done up with an elegance to do credit to any education. " -- letter of May 20 1813 List of passages in Pride and Prejudice referring to "accomplishments" or to women's education In Jane Austen's day, there was no centrally-organized system of state-supported education. Instead, "genteel" children might be educated at home by their parents, particularly when young (as the Morland children are in Northanger Abbey); or by live-in governesses (such as Miss Taylor in Emma) or tutors; or by going off to a private boarding school or to live with a tutor (as Edward Ferrars went to Mr.

Of course, women were not allowed to attend the institutionalized rungs on the educational ladder: "public" schools such as Eton (which Edmund Bertram in Mansfield Park attends), and the universities (Oxford and Cambridge). Regency Life - Marriage in Pride and Prejudice. Women's Legal position in Regency times Neckcloth | Georgian Marriages | A history of Pain | The Population Boom | A Regency Rose GardenLondon Clubs | Strange Occurences | Whig or Tory? 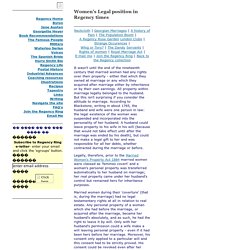 | The Dandy Servants | Rights of women | Royal Marriage Act | E-mail me | Join the Regency Ring | Back to the Regency collection It wasn't until the end of the nineteenth century that married women had any rights over their property - either that which they owned at marriage or any which they acquired after marriage either by inheritance or by their own earnings. All property within marriage legally belonged to the husband. But this isn't surprising if you consider the attitude to marriage. Legally, therefore, prior to the Married Women's Property Act 1884 married women were classed as 'femmes covert' and a woman's personal property was transferred automatically to her husband on marriage; her real property came under her husband's control but remained hers for inheritance purposes.

The influence of Jane Austen's social background on her novels. He is a gentleman; I am a gentleman’s daughter; so far we are equal.” 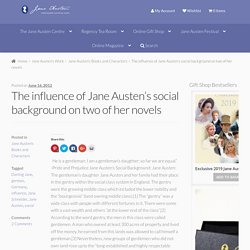 -Pride and Prejudice Jane Austen’s Social Background: Jane Austen: The gentleman’s daughter Jane Austen and her family had their place in the gentry within the social class system in England. The gentry were the growing middle class which included the lower nobility and the “bourgeoisie” (land owning middle class).[1] The “gentry” was a wide class with people with different fortunes in it.