Yet plagues of anxiety, stress, depression, social phobia, eating disorders, self-harm and loneliness now strike people down all over the world. The latest, catastrophic figures for children’s mental health in England reflect a global crisis. There are plenty of secondary reasons for this distress, but it seems to me that the underlying cause is everywhere the same: human beings, the ultrasocial mammals, whose brains are wired to respond to other people, are being peeled apart. Economic and technological change play a major role, but so does ideology.

Are we building a new grand narrative, or are grand narratives things of the past? At our latest live session of Howard Rheingold’s course Introduction to Cooperation Theory we discussed about narratives in the US and Europe about competition and cooperation. A European participant suggested that the narrative in the US is about competition, while in Europe cooperation is a more common theme. The American Howard Rheingold expressed doubts about this opposition: the US and Europe are big places with huge internal differences, and where different narratives co-exist. We also discussed the Occupy Wall Street movement and how it spreads worldwide. 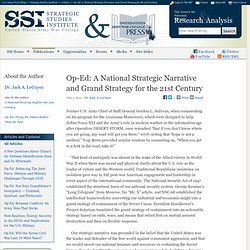 Army Chief of Staff General Gordon L. THE HIDDEN GRAND NARRATIVE OF WESTERN MILITARY POLICY: A LINGUISTIC ANALYSIS OF AMERICAN STRATEGIC COMMUNICATION. New U.S. or American History Narratives and Syntheses. Issue No. 108 (June 2007) -- Mark Satin, Editor Re-inventing American history When narratives collide, compromise is not the answer Last month I mentioned that one reason Israelis and Palestinians don’t get along is that they’ve bought into competing and mutually exclusive “narratives” of their past (expertly articulated by Alan Dershowitz’s The Case for Israel, 2003, and Rashid Khalidi’s The Iron Cage, 2006, respectively). 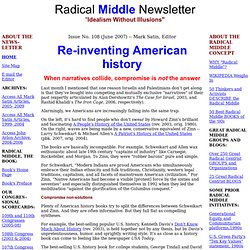 The Value of Grand Organizational Narratives. Okay, I admit it: I’m obsessed with the big picture. 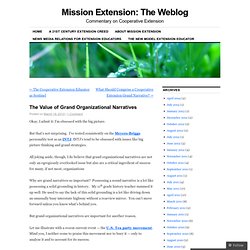 But that’s not surprising. I’ve tested consistently on the Meyers-Briggs personality test as an INTJ. INTJ’s tend to be obsessed with issues like big picture thinking and grand strategies. Stories of Change. Applies narrative analysis to the study of social movements. 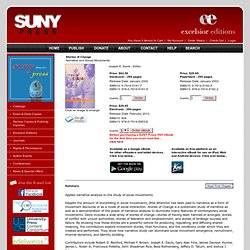 Despite the amount of storytelling in social movements, little attention has been paid to narrative as a form of movement discourse or as a mode of social interaction. Stories of Change is a systematic study of narrative as well as a demonstration of the power of narrative analysis to illuminate many features of contemporary social movements. Davis includes a wide array of stories of change—stories of having been harmed or wronged, stories of conflict with unjust authorities, stories of liberation and empowerment, and stories of strategic success and failure. By showing how these stories are a powerful vehicle for producing, regulating, and diffusing shared meaning, the contributors explore movement stories, their functions, and the conditions under which they are created and performed. 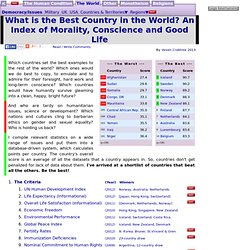 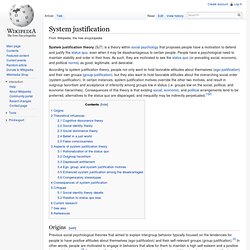 In certain instances, system-justification motives override the other two motives, and result in outgroup favoritism and acceptance of inferiority among groups low in status (i.e. groups low on the social, political, and economic hierarchies). Consequences of this theory is that existing social, economic, and political arrangements tend to be preferred, alternatives to the status quo are disparaged, and inequality may be indirectly perpetuated.[1][2] Origins[edit] Theoretical influences[edit] Cognitive dissonance theory[edit] Social identity theory[edit] Pew-Global-Attitudes-Values-Report-FINAL-November-17-2011-10AM-EST.pdf (application/pdf Object) US doesn't make cut for happiest nations list - Business - World business. What makes people happy? 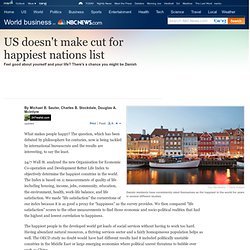 The question, which has been debated by philosophers for centuries, now is being tackled by international bureaucrats and the results are interesting, to say the least. 24/7 Wall St. analyzed the new Organisation for Economic Co-operation and Development Better Life Index to objectively determine the happiest countries in the world. The Index is based on 11 measurements of quality of life including housing, income, jobs, community, education, the environment, health, work-life balance, and life satisfaction.

What the Occupy Protests Mean: A TIMN Interpretation (Part II) [UPDATE — December 27, 2011: I’ve edited a bit, mostly to add a few new readings to the addendum, and to link to just-posted Part III. 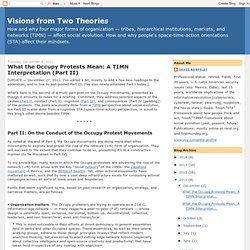 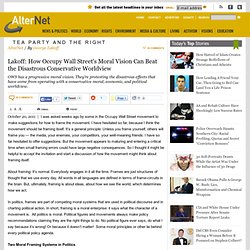 Join our email list: Stay up to date with the latest headlines via email. I was asked weeks ago by some in the Occupy Wall Street movement to make suggestions for how to frame the movement. George Lakoff - Thinking Points: Communicating Our American Values and Vision. 1. The Issue Trap. We hear it said all the time: Progressives won’t unite behind any set of ideas. We all have different ideas and care about different issues. The truth is that progressives do agree at the level of values and that there is a real basis for progressive unity. Progressive values cut across issues.

#OccupyDemocracy. On November 3rd occupiers amassed in an Oakland “general strike,” shutting down the entire port of Oakland for several hours. Over 3,000 people have been arrested in association with the Occupy protests since they began in New York on September 17th. Inspired by the citizen revolutions that unfolded this past spring across the Middle East and North Africa, occupations have spread to nearly every state in the United States, and gained traction in cities across the globe from London to Athens to Madrid to Bogotá.

Critical planning and other thoughts. Theory & Event - This Shit is Fucked Up and Bullshit. In lieu of an abstract, here is a brief excerpt of the content: Look, I understand that some people find the notion that we've become an oligarchy — with all that implies about class relations — disturbing. But that's the way it is.Paul Krugman I'm a worker. I go to work every weekday. I get paid. In his novel Dead Europe, Christos Tsiolkas imagines a man exiled from his country, who dies in another land. International Comparisons of Economic Mobility. Progressive-economic-narrative.pdf (application/pdf Object) The myths of the "self-made man" and meritocracy. The recession has caused a significant economic adjustment, including a realignment of assets and the demand and supply of talent.

Fatalism and the American Dream. The Meritocracy Myth. Barbmerit.pdf (application/pdf Object) How to Get the Rich to Share the Marbles. The Myth of the American Meritocracy. Alvarado.pdf (application/pdf Object) The Myth of Individualism. I always find it strange when people in the United States claim that they take care of themselves. I want to ask them if they have some crops growing and animals grazing in their backyards; various tools in their garages to manufacture and repair all of their needed goods and devices; and basic medical, dental, legal, and other professional training to perform vital services for themselves. The Myth Of Rugged Individualism. 20081015_Beard.pdf (application/pdf Object) Characteristics of the Entrepreneur: Morality. A Brief History of Corporate Welfare “Ten men in our country could buy the whole world and ten million can’t buy enough to eat”. – Will Rogers, 1931 Nothing much has changed has it?

Representations of Global Capital. Are heroic narratives about labor critical of capitalism? : TrueFilm. The Pro-Capitalist Narrative. A few weeks ago, I finished reading John Pilger's Freedom Next Time (2007). When Mitt Romney Came To Town — Full, complete version. Why the American Empire Was Destined to Collapse.

Photo Credit: ShutterStock.com March 7, 2012 | More Conflict Seen Between Rich and Poor, Survey Finds. About two-thirds of Americans now believe there are “strong conflicts” between rich and poor in the United States, a survey by the found, a sign that the message of brandished by the Occupy Wall Street movement and pressed by Democrats may be seeping into the national consciousness. The High Cost of Poverty: Why the Poor Pay More. You have to be rich to be poor. Awareness of Class Warfare Surged in 2011. Wvwv-dcorps-3os-memofinal.pdf (application/pdf Object)

A Conflict of Humanity: Individualism vs. Collectivism. Tolerance for Income Gap May Be Ebbing - Economic Scene.

Related:  Changing the Narrative for War    by Philip Giraldi   -  The Myth Of Rugged Individualism   -  Education   -  Enterprise