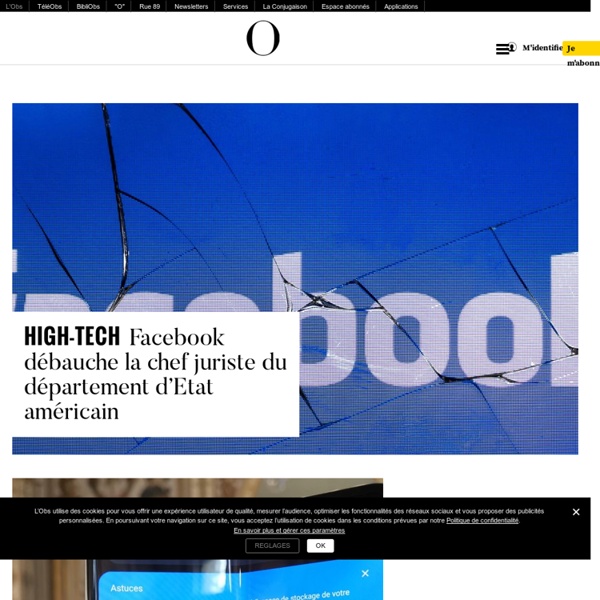 Legal notice You have the right to access, amend, rectify or delete your personal data (privacy and data protection law of January, 6th 1978). For all requests, please send an e-mail to our directory service: annuaire@hecalumni.fr. Ambassador Kirk: People would be “walking away from the table” i After attending the three day WTO Ministerial meeting in Geneva, I took the non-stop United Airlines Flight back to Washington, DC. On the airplane were a number of U.S. government officials including the head of USTR, Ambassador Ron Kirk. I had a chance to talk to Kirk about the secrecy of the ACTA agreement. He said the ACTA text would be made public, “when it is finished.” I told him it that was too late, and the public wanted the text out now, before it is too late to influence anything. Is Google Making Us Stupid? - The Atlantic (July/August 2008) Illustration by Guy Billout "Dave, stop. Stop, will you? Stop, Dave. Will you stop, Dave?”

The Real-Time PR Man If you attend a tech event or conference you will probably run into Brian Solis. He’s one of those rare PR birds: everywhere all the time. He’s always on Twitter and Facebook too. The "hyperlocal" lessons of America's weekly newspapers In her new book, award-winning broadcast journalist Judy Muller goes deep into the experiences of small-town and rural newspapers to draw lessons for anyone passionate about doing community journalism right. While her book focuses on print weeklies, Muller’s subject matter is just as relevant for the growing number of online editors and independent publishers working to serve neighborhoods and towns — what’s now called hyperlocal news. “Emus Loose in Egnar: Big Stories from Small Towns” takes us off the main highway — not just geographically, but away from the big-media conversation that dominates journalism discussion these days. And like physical journeys to new places, this one rewards us with insight and appreciation — for the sometimes-heroic, sometimes-flawed, always influential small-town news people and for Muller, our enthusiastic and honest tour guide. Muller, a veteran television and radio journalist and associate professor at USC Annenberg, is a fan of these papers.

Solving The Scoble Problem In Social Networks Editor’s note: Guest writer Rocky Agrawal blogs at reDesign and Tweets @rakeshlobster. I finally blocked Robert Scoble in Google+. I have absolutely nothing against Scoble. I quite admire him, actually. He’s a great asset to the startup scene and he works damn hard. Blogging ACTA Across The Globe: Lessons From Korea If there's one country that might have insight into what a post-ACTA future may look like, it's the Republic of Korea. Korea is known as having one of the most advanced networks in the world, but more recently it has also been the recipient of some of the strongest foreign pressure to ramp up its IP laws. Heesob Nam is a member (and former Chair) of IPLeft, a Korean digital rights activist group founded in 1999 to critique the increasingly maximalist IP rights agenda in that country, and research and present alternative policy proposals. He writes of the impact on Korea of ACTA and other international IP agreements. For Korea, ACTA is the Anti-Commons Trade Agreement In August 2008, our group, IPLeft, demanded that the Korean government disclose relevant information about its stance on the negotiation of ACTA.

Google's Book Search: A Disaster for Scholars - The Chronicle Re By Geoffrey Nunberg Whether the Google books settlement passes muster with the U.S. District Court and the Justice Department, Google's book search is clearly on track to becoming the world's largest digital library. No less important, it is also almost certain to be the last one. Google's five-year head start and its relationships with libraries and publishers give it an effective monopoly: No competitor will be able to come after it on the same scale. Nor is technology going to lower the cost of entry.

Building Super Scalable Sy "But it is not complicated. [There's] just a lot of it." -- Richard Feynman on how the immense variety of the world arises from simple rules. Contents: We have not yet begun to scale. The world is still fundamentally disconnected and for all our wisdom we are still in the earliest days of learning how to build truly large planet-scaling applications. Today 350 million users on Facebook is a lot of users and five million followers on Twitter is a lot of followers. The New York Times imagines the kitchen table of the future At The New York Times Company’s R&D Lab, the group’s collective of technologists, artists, and journalists talks a lot about “information shadows” — the auras of data that surround us in our daily lives. Tracking and processing the info trails we leave, the thinking goes, allows for deeper insights into ourselves — and it can also help media organizations to provide their users with news consumption experiences as intimate as they are relevant. We tend to emphasize the “self” aspects of “the quantified self“; the R&D Lab is exploring what it means to be a part of a quantified community — and, for the Times, what it means to be a provider of information to that community.

It’s Not Scoble’s Fault, It’s The Algorithm’s It seems I stirred the pot over the weekend with my post on why I blocked Robert Scoble on Google+. Some of the reaction clearly missed the point I was trying to make. It wasn’t a criticism of Scoble, whose work I like, but a criticism of Google+ algorithms that continually resurface content by those who are popular on the Internet. I follow Scoble on Twitter and we just became friends on Facebook. Given the way Facebook and Twitter surface content, this hasn’t been a problem at all. ACTA One Step Closer To Being Done; Concerns About Transparency Despite widespread demands from politicians around the globe, combined with promises from the USTR to be more open and transparent (despite unsubstantiated and totally ridiculous claims that countries would leave the negotiations if details were made public) and even entertainment industry lobbyists admitting that the process could be more transparent, ACTA negotiations are continuing in a veil of total secrecy to the public (unless you're a big industry lobbyist -- then it's open). The latest meetings in Mexico were again held in total secrecy, where public concerns were mocked, but appear to have continued to move the negotiations forward with claims coming out that the document is in "final drafting stages." Yes, without any transparency or participation allowed from those who it would impact most: the public. How is it that any government is willing to participate in such a process? It's a massive travesty.

Personally speaking Posted by Sep Kamvar, Engineering Lead for Personalization, and Marissa Mayer, VP Search & User Experience Google's goal has always been to give you exactly the information you want right when you want it. With the growth of the Internet and all the new information coming online every day, this might sound hard. We're constantly trying to improve the quality of your search results. World-brand-building mistakes France’s entrepreneurs make On Tuesday I joined up with the Traveling Geeks (a band of journalists/bloggers/influentials who visit startups around the world, picture of them above in a Paris subway station) in Paris and we saw a ton of startups. Some of them, like Stribe, were very good. But overall they just didn’t measure up. In fact, they even got me to be rude to them, which caught everyone off guard.