Top 10 Most Urgent Problems in the World. (Before It's News) World Bank economist Jean-Francois Rischard argues that the international community is still living through some truly momentous times. 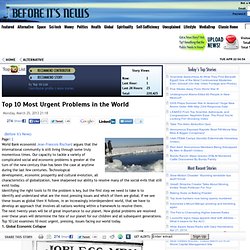 Our capacity to tackle a variety of complicated social and economic problems is greater at the turn of the new century than has been the case at anytime during the last few centuries. Technological development, economic prosperity and cultural evolution, all characteristics of globalization, have sharpened our ability to resolve many of the social evils that still exist today. Identifying the right tools to fit the problem is key, but the first step we need to take is to identify and understand what are the most pressing issues and which of them are global.

If we see these issues as global then it follows, in an increasingly interdependent world, that we have to develop an approach that involves all nations working within a framework to resolve them. The next twenty years will be of great importance to our planet. 1. 2. Global Issues : social, political, economic and environmental issues that affect us all — Global Issues. The World's Biggest Problems. The World’s Biggest Problems portal has a simple, clear mission: educating people all around the world about the biggest problems facing humanity. 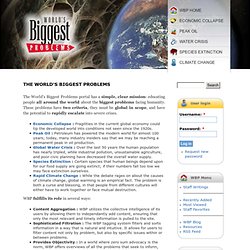 These problems have two criteria, they must be global in scope, and have the potential to rapidly escalate into severe crises. Economic Collapse : Fragilities in the current global economy could tip the developed world into conditions not seen since the 1920s.Peak Oil : Petroleum has powered the modern world for almost 100 years; today, many industry insiders say that we may be reaching a permanent peak in oil production. Global Water Crisis : Over the last 50 years the human population has nearly tripled, while industrial pollution, unsustainable agriculture, and poor civic planning have decreased the overall water supply.

Species Extinction : Certain species that human beings depend upon for our food supply are going extinct; if their numbers fall too low we may face extinction ourselves. WBP fulfills its role in several ways: The 10 Biggest Problems In The World According To The EU. 10 greatest threats facing the world in 2014. The World Economic Forum on Thursday released its Global Risks 2014 report. 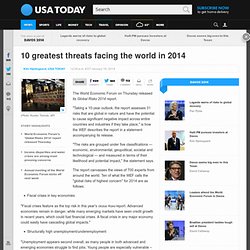 "Taking a 10-year outlook, the report assesses 31 risks that are global in nature and have the potential to cause significant negative impact across entire countries and industries if they take place," is how the WEF describes the report in a statement accompanying its release. "The risks are grouped under five classifications — economic, environmental, geopolitical, societal and technological — and measured in terms of their likelihood and potential impact," the statement says.

Fear can be inherited. Along with eye color, height and dimples, parents’ fears can pass down to children, scientists report December 1 in Nature Neuroscience. 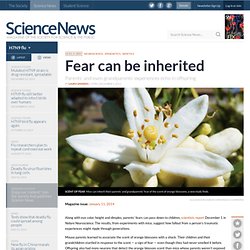 The results, from experiments with mice, suggest how fallout from a person’s traumatic experiences might ripple through generations. Mouse parents learned to associate the scent of orange blossoms with a shock. Their children and their grandchildren startled in response to the scent — a sign of fear — even though they had never smelled it before. Offspring also had more neurons that detect the orange blossom scent than mice whose parents weren’t exposed to the scent. Sperm cells alone can deliver this fear message, study authors Brian Dias and Kerry Ressler of Emory University found. Forgetting How to READ?! It happened to a reading instructor, of all people. 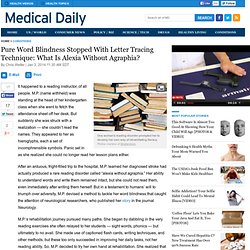 M.P. (name withheld) was standing at the head of her kindergarten class when she went to fetch the attendance sheet off her desk. But suddenly she was struck with a realization — she couldn’t read the names. They appeared to her as hieroglyphs, each a set of incomphrensible symbols. Science Fair Ideas. Nature Glows With Neon Animals and Plants. I scream, you scream, we all scream for … glow-in-the-dark ice cream? British boutique ice cream maker Lick Me I'm Delicious (yes, that is the company's real name) recently released a glow-in-the-dark ice cream that uses a luminescent protein from glowing jellyfish. The idea? Lick the ice cream and calcium-activated proteins react by glowing, thanks to differences in your mouth's warmer pH level and the ice cream's more neutral pH. If you're tempted to see if glow-in-the-dark ice cream merits glowing praise, be forewarned: a scoop will set you back about $220 in sweet change.

Turns out jellyfish protein isn't exactly cheap. The glowing frozen dessert made us wonder about other instances of luminescence out there. Sperm. Mushrooms. Reefs. Animals. Marine scientist verses the skeptics: haiku about climate change. SEATTLE — The language of the United Nation's most recent international report on climate change is not exactly what you'd call poetic. 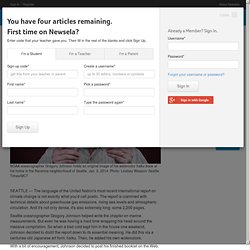 The report is crammed with technical details about greenhouse gas emissions, rising sea levels and atmospheric circulation. And it's not only dense, it's also extremely long: some 2,200 pages. Seattle oceanographer Gregory Johnson helped write the chapter on marine measurements. But even he was having a hard time wrapping his head around the massive compilation. So when a bad cold kept him in the house one weekend, Johnson decided to distill the report down to its essential meaning. With a bit of encouragement, Johnson decided to post his finished booklet on the Web. “I was surprised that as many people responded as positively as they did,” said Johnson. Games for Impact - by IdeaScale. The science behind why we take selfies. 16 January 2014Last updated at 20:31 ET Magazine Monitor A collection of cultural artefacts The selfie has arguably become the greatest photographic trend of our time. 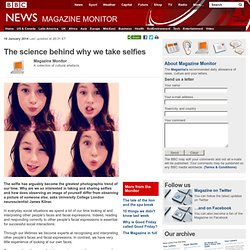 Why are we so interested in taking and sharing selfies and how does observing an image of yourself differ from observing a picture of someone else, asks University College London neuroscientist James Kilner. Why Is Facebook Blue? The Science of Colors in Marketing. Why is Facebook blue? 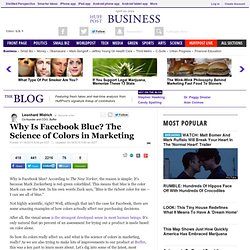 According to The New Yorker, the reason is simple: It's because Mark Zuckerberg is red-green colorblind. This means that blue is the color Mark can see the best. In his own words Zuck says, "Blue is the richest color for me -- I can see all of blue. " Not highly scientific, right? MIT + K12. Weekly Brainwave Archive. Branches of science. The scale of the universe mapped to the branches of science and the hierarchy of science The branches of science (also referred to as "sciences", "scientific fields", or "scientific disciplines") are commonly divided into three major groups: natural sciences, which study natural phenomena (including fundamental forces and biological life), formal sciences (such as mathematics and logic, which use an a priori, as opposed to factual, methodology) and social sciences, which study human behavior and societies.[1] 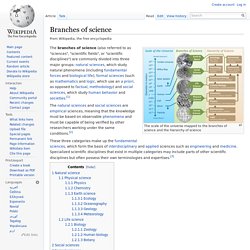