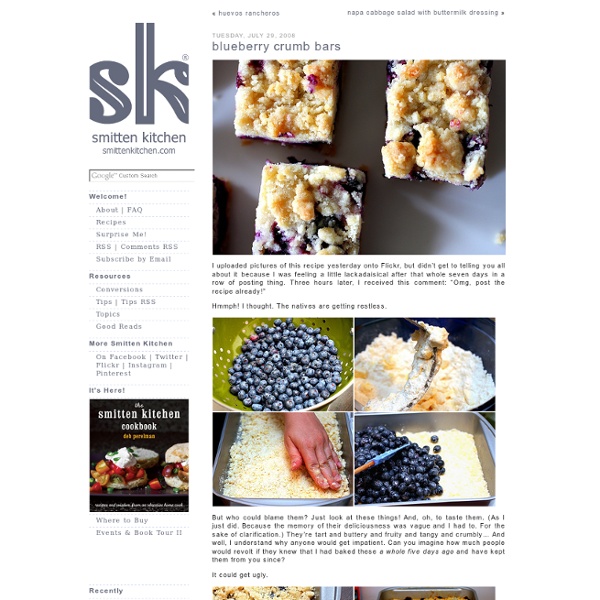 I uploaded pictures of this recipe yesterday onto Flickr, but didn’t get to telling you all about it because I was feeling a little lackadaisical after that whole seven days in a row of posting thing. Three hours later, I received this comment: “Omg, post the recipe already!” Hmmph! I thought. The natives are getting restless. But who could blame them? It could get ugly. But if there ever were a dessert worth getting ugly for, it would have to be this. “Omg, post the recipe already!” As you wish. Blueberry Crumb Bars Adapted from AllRecipes.com Recipes like this make me wonder why I don’t use AllRecipes.com more. I could imagine easily swapping another fruit or berry for the blueberries–I’m especially thinking something tart like sour cherries or cranberries in the fall (I’d use orange instead of lemon with cranberries). These are easiest to cut once chilled, and store even better in the fridge than they do at room temperature–something unusual for cookies! 1. 2. 3. 4.

Blueberry Crumble Slice Blueberry again? Yeap, I've been loading up my pantry with blueberries since its so cheap now. Carlos never like eating it fresh but prefer it in his dessert so I made this slices with it. Cinnamon Sugar Pull-Apart Bread Looks yummy, right? And let me tell you, this cinnamon bread really is yummy! Immensely! I am actually so impressed by it that I would call it a gift from heaven. Okay, maybe not exactly from heaven since the original recipe was born in Joy the Baker’s kitchen. Blueberry Butter Cake I do not like summer because of the heat but one thing I do look forward to summer is all the fresh fruits. Fresh berries are relatively cheap now and I am really enjoying eating it fresh especially the cherries and strawberries. We ate so much of fresh strawberries in CA and they were really big and sweet compared to the one I get from the supermarket here. I made this delicious cake with fresh blueberries I bought from the produce place.

Lemon Blackberry Coffee Cake with Lemon Streusel This Lemon Blackberry Coffee Cake is another recipe that takes advantage of fresh, summertime berries. I, obviously, used blackberries in this case. Blueberries are definitely more popular for muffins and coffee cakes than blackberries are, since they tend to hold their shape and not “bleed” too much juice into a baked good. But there are advantages to using bigger, juicer berries: the fresh blackberries give this coffee cake an almost cobbler-like feel to it – which makes this one coffee cake that is just as good for dessert as it is for breakfast. You can use frozen berries, tossing them in a teaspoon or two of flour before stirring them into the batter, but if you can get fresh berries you’re going to get the best results. The cake batter itself is moist and buttery, enriched with both butter and buttermilk for a very flavorful base for the blueberries.

Last Call for Blueberries I’m usually not one for either making or hosting guest posts, but when the Beantown Baker invited me over to her blog to share a bit of my work, I could hardly refuse. So, for today’s recipe, go check it out over in the Friday Favorites section. You don’t want to miss this one- Marbled Blueberry Bundt Cake to finish off the berry season! Here’s just a small taste… Meyer Lemon and Blueberry Bread In looking for a way to use up the rest of my meyer lemons, it occured to me to make some sort of baked good. A stretch, I know. Actually, my first thought was to make a lemon pudding. Zesty Raspberry Loaf This is a very beautiful loaf. It has a golden top, an almost white interior and, of course, bright raspberries scattered throughout, making the contrast between white and red all the more obvious. The idea to do a lime-raspberry flavor combination had been floating around in my head for some time, but I kept forgetting to buy raspberries.

blueberry boy bait A few weeks ago, as I was going on about how much I like just about every color and shade of baked fruit desserts, the goofier the name — be it “grunt”, “slump”, “buckle”, or “betty” — the better, a reader named Shirley asked me if I’d ever tried anything called Blueberry Boy Bait. And people, seeing as I unabashedly choose magazines for their covers and fawn over the titles of books (“I Was Told There’d Be Cake,” anyone?) that I have no interest in reading, let’s just say that although I had no idea what Blueberry Boy Bait was, I knew it would be made, in my kitchen, sooner than soon. [Well, actually I'd bookmarked it for August, when I believed blueberries to be in season, only to find them at my local greenmarket four days later where I proceeded to plotz from happiness.

How To Make Perfect Brownies I’ve tried lots of brownie recipes: Boxes, scratch, frosted, plain, nuts, chips, fudge … Each of them has something to like, but depending on my mood I might want a change of pace. Not any more. My wife found this recipe, and it’s perfect.