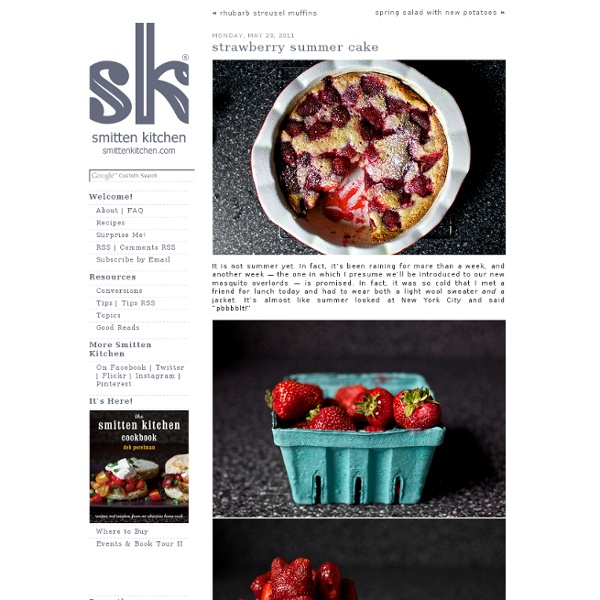 It is not summer yet. In fact, it’s been raining for more than a week, and another week — the one in which I presume we’ll be introduced to our new mosquito overlords — is promised. In fact, it was so cold that I met a friend for lunch today and had to wear both a light wool sweater and a jacket. It’s almost like summer looked at New York City and said “pbbbblt!” But I know it’s coming. I know it’s coming because strawberries appeared at the Greenmarkets last week and if you think I dork out pretty badly when the first asparagus stalks appear, you ain’t seen nothing like my “the strawberries are here!” I hope this will be your summer cake. And your apartment will smell like a strawberry patch. One year ago: Rustic Rhubarb TartsTwo years ago: Raspberry Buttermilk Cake and Slaw TartareFour years ago: Cellophane Noodle Salad with Roast Pork Strawberry Summer Cake Adapted, only slightly, from Martha Stewart I recently picked up some barley flour and fell in love with it.

new york cheesecake New Yorkers have a reputation for being pushy and over-the-top — these are things you learn when you leave the city for a weekend, and a ticketing agent at the airport in Tulsa, for example, informs you that you’re so much more polite than she thought a New Yorker would be. We apparently like things bolder and taller and shinier and more intense and while I’m not sure if this really applies to your average straphanger commuting from walk-up to cubicle and back again everyday, I am absolutely certain that it applies to our cheesecakes. (No, the other kind, silly.) How is a New York Cheesecake unlike any other cheesecake? To begin, it’s very very tall. blueberry boy bait A few weeks ago, as I was going on about how much I like just about every color and shade of baked fruit desserts, the goofier the name — be it “grunt”, “slump”, “buckle”, or “betty” — the better, a reader named Shirley asked me if I’d ever tried anything called Blueberry Boy Bait. And people, seeing as I unabashedly choose magazines for their covers and fawn over the titles of books (“I Was Told There’d Be Cake,” anyone?) that I have no interest in reading, let’s just say that although I had no idea what Blueberry Boy Bait was, I knew it would be made, in my kitchen, sooner than soon.

Lemon Blueberry Bread Recipe Lemon Blueberry Bread Recipe: Preheat oven to 350 degrees F (180 degrees C) and place the oven rack in the center of the oven. Butter (or spray with a non stick vegetable spray) the bottom and sides of a loaf pan (9 x 5 x 3 inch) (23 x 13 x 8 cm). In a separate bowl, whisk together the flour, baking powder, salt, and lemon zest. Remove 1 tablespoon of the flour mixture. Place the blueberries in a separate bowl and toss the berries with the 1 tablespoon flour (this will help prevent the blueberries from sinking to the bottom of the pan during baking.) In the bowl of your electric mixer, or with a hand mixer, beat the butter until softened (about 1 minute).

Cheesecake in a Jar Recipe I’m fairly certain that I’ve discussed my lack of love for the great outdoors, so it’s safe to say you’ll never hear me writing about long hikes in the woods or camping anywhere other than on a deck chair at a five star resort (Hey, I can dream, right?). Not to say that I am not fond of the fresh air and scenery, I just like to keep a screen between me and the bugs. Needless to say, I don’t last long at picnics in the park or anywhere outdoors for that matter. Usually an annoying fly or buzzing bee will send me into a fit within 20 minutes and I’ll sit there contemplating my escape route or the idea of eating in my air conditioned vehicle. Problem is, I am a big pan of picnic food.

Whole Grain Blueberry Buckle Crisps and cobblers are fairly common fruit desserts and, when you hear either one mentioned you probably have a clear idea of what to expect. Buckles fall into the same general category, but get a lot more questioning looks when mentioned than some other fruity desserts. A “buckle” is a fruit-laden cake that gets its name from the fact that the added moisture from all the fruit can actually cause the cake to “buckle” a bit in the center. While cake batter is what gives the cake substance and structure, the dessert should have a very high fruit content. Buckles also often have a slightly crispy topping of sugar or a thin layer of streusel. Sill loaded with fresh blueberries after making my bluberry tart, juicy blueberries were my fruit of choice for this buckle.

Katiecakes: Earl Grey Cupcakes Everyone loves a cup of tea, and those who don't... well I simply don't trust them. As my fiancee delves deeper into his love of coffee I find myself drinking more exotic and exciting teas in a vain attempt to tempt him away from his espresso machine. My cupboards are bulging with dozens of different varieties, loose leaf, bags, flowering you name it, I have it! Even with all of these colourful and tasty teas adorning my shelves I always come back to the same two favorites, a good old cup of builders brew (you can't beat it) and a steaming cup of Earl Grey. I've made these cupcakes tonnes of times and they never disappoint. Delicately scented they're the perfect accompaniment to an afternoon curled up with your favorite book and a beautiful cup of their namesakes tea.

two-ingredient maple soufflé I know, I know. You read that post title and thought to yourself, Katy is clearly messing with us this morning. And then you thought, Seriously, Katy? You got us all excited for what is obviously some kind of very cruel joke, because who on this planet can craft a soufflé out of two ingredients? Well, I can. And I thought I’d share the recipe with you, but if you’re going to be like that, I’ve changed my mind. Blueberry Pecan Coffee Cake I read quite a few food magazines every month. Given that I also have a fair number of cookbooks, recipes from other blogs and recipes that I either make up or have ideas for, I have accumulated quite a backlog of recipes and a magazine recipe has to be pretty appealing for me to bump it up in the queue. I picked up a copy of Healthy Cooking magazine recently, though, and there were a few things that caught my eye. I’m sure it didn’t hurt that the issue was packed with holiday dessert recipes.

Espresso Brownies September 18, 2010 Espresso Brownies Something deep and sweet – extremely sweet. They are so sweet and moist, that they literally hurt my tooth. Zesty Raspberry Loaf This is a very beautiful loaf. It has a golden top, an almost white interior and, of course, bright raspberries scattered throughout, making the contrast between white and red all the more obvious. The idea to do a lime-raspberry flavor combination had been floating around in my head for some time, but I kept forgetting to buy raspberries. Or when I would get them, they would often spoil before I had a chance to use them. In all probability, the weather this summer has not been very produce-friendly, which probably contributed to the exceptionally short shelf-life of my berries. In the end, I ended up using frozen raspberries despite the fact that I could have used fresh.