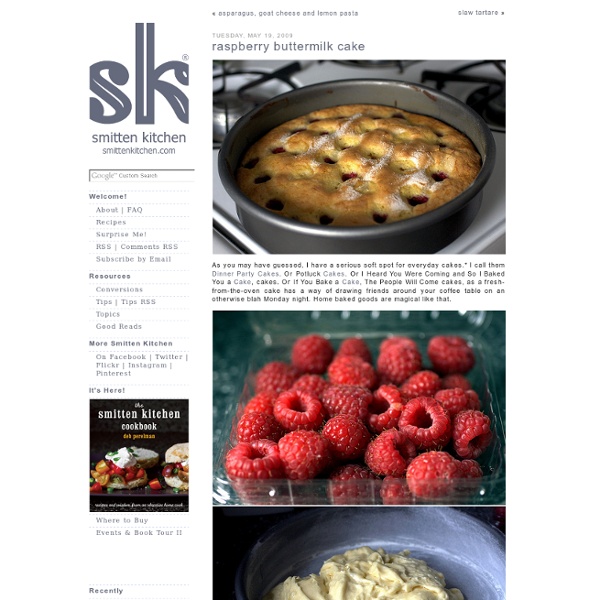 As you may have guessed, I have a serious soft spot for everyday cakes.* I call them Dinner Party Cakes. Or Potluck Cakes. Or I Heard You Were Coming and So I Baked You a Cake, cakes. Or If You Bake a Cake, The People Will Come cakes, as a fresh-from-the-oven cake has a way of drawing friends around your coffee table on an otherwise blah Monday night. Home baked goods are magical like that. This one was no exception. It was totally worth the wait. * One day, soon hopefully, I will put all of the “everyday cakes” on this site on one topic page. Two years ago: Cellophane Noodle Salad with Roast Pork… promise me you’ll make this on the grill this weekend, m’kay? Raspberry Buttermilk Cake Adapted from Gourmet, June 2009 You can just ignore the word “raspberry” up there and swap it up with any which berry you please, like blackberries or blueberries or bits of strawberries or all of the above. Preheat oven to 400°F with rack in middle. Note: Directions like “scatter” always scare me.

blueberry boy bait A few weeks ago, as I was going on about how much I like just about every color and shade of baked fruit desserts, the goofier the name — be it “grunt”, “slump”, “buckle”, or “betty” — the better, a reader named Shirley asked me if I’d ever tried anything called Blueberry Boy Bait. And people, seeing as I unabashedly choose magazines for their covers and fawn over the titles of books (“I Was Told There’d Be Cake,” anyone?) that I have no interest in reading, let’s just say that although I had no idea what Blueberry Boy Bait was, I knew it would be made, in my kitchen, sooner than soon. [Well, actually I'd bookmarked it for August, when I believed blueberries to be in season, only to find them at my local greenmarket four days later where I proceeded to plotz from happiness. Bring on the boy-baiting!] One year ago: I finished a wedding cake!

Rainbow Cake Need some happiness in the form of a Rainbow Layer Cake? I think yes!! My daughter just recently celebrated her birthday. As I was looking for cake ideas I came across this idea for making a rainbow cake and of course my daughter and I both loved it. Chocolate Fudge Layer Cake I never ate cake until I was 8 or 9 years old. But I sure ate a lot of frosting! I was that kid at birthday parties who hopped up and down when the corner piece – the one with the profuse amount of frosting flourishes – was being passed out. I’d extract every last bit of sugary, fluffy stuff and leave the cake on the little paper plate. It wasn’t until the middle of my elementary school years that a frustrated parent of a friend finally urged me to try just a bite of the cake “just this once” that I discovered the treat I was missing. Suffice it say I’ve eaten plenty of cake – and frosting – this week as we’ve made our way through this incredibly rich and decadent Chocolate Fudge Layer Cake.

Zesty Raspberry Loaf This is a very beautiful loaf. It has a golden top, an almost white interior and, of course, bright raspberries scattered throughout, making the contrast between white and red all the more obvious. The idea to do a lime-raspberry flavor combination had been floating around in my head for some time, but I kept forgetting to buy raspberries. Or when I would get them, they would often spoil before I had a chance to use them. In all probability, the weather this summer has not been very produce-friendly, which probably contributed to the exceptionally short shelf-life of my berries.

Rose Cake Tutorial SO excited to share with you how easy it is to make the rose cake. Seriously, once you see you are going to run right out, buy a 1M tip, and make one. That or go back to work. Or bed. Or whatever it was you were doing before I interrupted you. Ok, here we go! 6-Layer Rich Chocolate Malted & Toasted-Marshmallow Cake There’s something about layer cakes that always brings me great comfort–from both making them and eating them. To me, layer cakes are baked bliss, truly. Don’t get me wrong, cupcakes are wonderful; cupcakes are sweet; cupcakes are darling (and perky), but they just aren’t layer cakes.

Meyer Lemon and Blueberry Bread In looking for a way to use up the rest of my meyer lemons, it occured to me to make some sort of baked good. A stretch, I know. Actually, my first thought was to make a lemon pudding. This thought took place before I completely lost my appetite for custardy desserts, so it wouldn’t do. I started searching for lemon bread recipes instead. Absolutely Amazing DIY Birthday Cakes! Parenting.com has a fabulous birthday cake gallery/tutorial that is nothing short of AMAZING! Each of the 31 cakes in this gallery comes with step-by-step instructions on how you can recreate it at home. There’s some serious creativity & resourcefulness going on here! Pictured at top: Castle cake – featuring ice cream cone turrets…SWEET! Pictured below: Pirate Ship and Soccer Ball cakes.

Triple-Lemon Blueberry Layer Cake Happy Wednesday! I hope you had a wonderful Valentine’s Day with all of your lovies. I woke up yesterday morning, with a sudden and unrelenting need for sunshine–in any form. For what I think was the first time, rather than craving a particular food (or ingredient), I was craving a colour: yellow! I knew I had to make and bake something full of sunshine–absolutely bursting with sunshine, from the inside out: this time it was all about flavour.

Whole Grain Blueberry Buckle Crisps and cobblers are fairly common fruit desserts and, when you hear either one mentioned you probably have a clear idea of what to expect. Buckles fall into the same general category, but get a lot more questioning looks when mentioned than some other fruity desserts. A “buckle” is a fruit-laden cake that gets its name from the fact that the added moisture from all the fruit can actually cause the cake to “buckle” a bit in the center. While cake batter is what gives the cake substance and structure, the dessert should have a very high fruit content. Buckles also often have a slightly crispy topping of sugar or a thin layer of streusel. Rainbow Cake For Cake: 2 1/4 cups cake flour (9 ounces) 1 cup whole milk, at room temperature 6 large egg whites (3/4 cup), at room temperature 2 teaspoons almond extract 1 teaspoon vanilla extract 1 3/4 cups granulated sugar (12 1/4 ounces) 4 teaspoons baking powder 1 teaspoon table salt 12 tablespoons unsalted butter (1 1/2 sticks), softened but still cool Red, orange, yellow, green, blue, and purple gel food coloring For Frosting/Filling: 2 1/2 cups granulated sugar 10 large egg whites 2 pounds (8 sticks) unsalted butter, cut into tablespoons, softened 2 teaspoons pure vanilla extract 1 pound best-quality white chocolate, melted and cooled Preheat oven to 350 degrees.