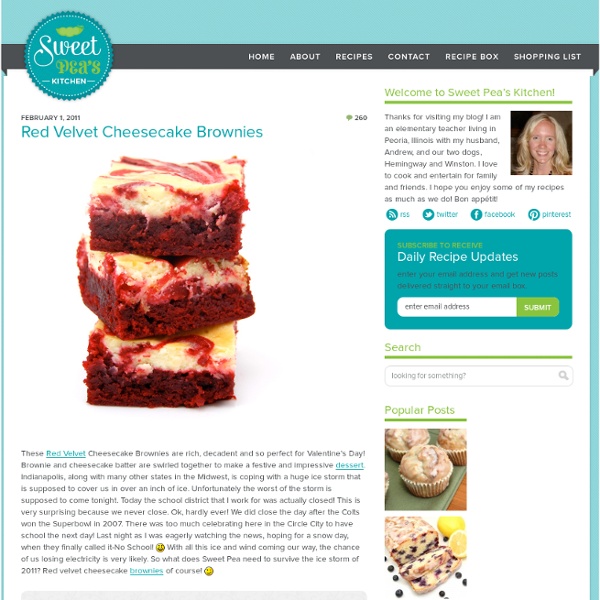 Red Velvet Cheesecake Brownies These Red Velvet Cheesecake Brownies are rich, decadent and so perfect for Valentine’s Day! Brownie and cheesecake batter are swirled together to make a festive and impressive dessert. Indianapolis, along with many other states in the Midwest, is coping with a huge ice storm that is supposed to cover us in over an inch of ice. Unfortunately the worst of the storm is supposed to come tonight. Today the school district that I work for was actually closed! With all this ice and wind coming our way, the chance of us losing electricity is very likely. Yield: 16 large brownies or 24 smaller brownies Ingredients: 1/2 cup unsalted butter 2-oz dark chocolate, coarsely chopped 1 cup sugar 2 large eggs 1 tsp vanilla extract 1 1/2 teaspoon red food coloring 2/3 cup all purpose flour 1/4 teaspoon salt 8-oz cream cheese, room temperature 1/3 cup sugar 1 large egg 1/2 tsp vanilla extract Directions: Preheat oven to 350F. Looking for more Red Velvet recipes? Leave a Comment

Cake Push Ups-Have you seen these? & MyCakeSchool Blog Well, I first saw these “cake push ups” just a few weeks ago. A member on our site mentioned them & I thought that this idea was pure genius! Three cheers for a new way to eat cake! :0) – Chocolate Chip Cookie Dough Brownies Brownies are sort of like cheesecake, aren’t they? There’s nothing better than the perfect dense, fudgy brownie, just like not much can beat a classic piece of creamy cheesecake. Yet with both of these desserts we’re always fiddling around with different versions, swirling things in and layering things on the top and the bottom (incidentally, peanut butter goes well with both!).

10 Decadent Holiday Pie Recipes The Holidays are here, so let’s indulge. Check out these beautiful holiday pie recipes perfect for your next gathering! Cranberry Dark Chocolate Holiday Pie by Let’s Dish Recipes Leg of Lamb in the Slow Cooker with Mint, Rosemary & Garlic - Dinner With Julie One of the most popular search terms people use to get here is “leg of lamb slow cooker”. Apparently I posted about it sometime back in 2008, and there are a great many people who want to know how to cook leg of lamb in the slow cooker. I’m glad to know this – there are few better – or simpler – meals than a melt-in-your-mouth leg of lamb, slow cooked while you go about your day. If you pick up a leg of lamb – with or without the bone – that has had the shank end trimmed off, it will fit perfectly in a slow cooker. Lamb needs little help – I rubbed mine with chopped fresh mint, rosemary and garlic in no particular quantity, helped along with a glug of olive oil.

Cinnamon Toast Rolls The USDA released its new food pyramid the other day (which is actually a plate now instead of a pyramid), and I am sorely disappointed to report that cinnamon rolls did not appear anywhere on that plate. I think by now most of us know what should be on our dinner plate in terms of healthy, well-rounded nutrient-laden meals, but it is my considered opinion that our breakfast plate should include cinnamon rolls now and then. And not just any cinnamon roll, mind you, but how ‘bout a homemade cinnamon roll hybrid that is a cross between a cinnamon roll and cinnamon toast, is super easy to make and gosh darn delicious. In honor of their ancestry, I call these little gems cinnamon toast rolls, and here’s all you need to make them…

Watermelon Lime Sorbet Slices A sweet and tangy watermelon lime sorbet is a great way to cool off in the summer. As a bonus, this recipe is frozen back in the watermelon rind and cut off into slices. It’s hot. The type of heat where when you step outside the door and your skin is wet before the door swings shut behind you. It’s a hot that hangs in the air, letting you breathe it in, that is cured only by two things: being completely immersed in water or hiding indoors, the air conditioning cranked as far as it will go.I find that the heat makes me very unmotivated to do things like take a walk, water and weed the garden (though I have forced that one on myself) and prepare food and eat it.

Red Velvet Brownies *If you like recipes like these be sure to stop by my new E-cookbook E-licious and use code BROWNIES50 to get the book 50% off ,making it only $2.50 for over 45 recipes! Brownies are huge in our house, but I’ve never made brownies from scratch, weird I know. Those brownies from a bag are just too good and easy, or so I thought.

Sugared Cranberries So, Dan and I flew up to Massachusetts last week to spend Thanksgiving with his family. It was...super stressful. Not because of the family time -- Dan's family is awesome, and I love hanging out with them. No, the trip was stressful because of the . Man, I hate traveling.