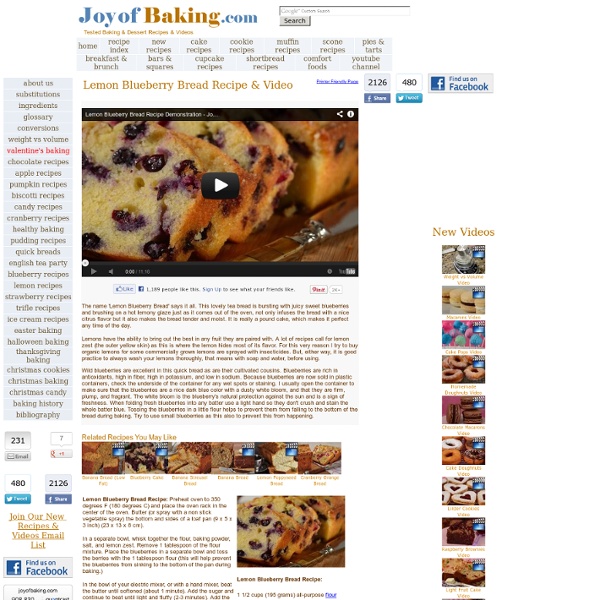 Lemon Blueberry Bread Recipe: Preheat oven to 350 degrees F (180 degrees C) and place the oven rack in the center of the oven. Butter (or spray with a non stick vegetable spray) the bottom and sides of a loaf pan (9 x 5 x 3 inch) (23 x 13 x 8 cm). In a separate bowl, whisk together the flour, baking powder, salt, and lemon zest. Remove 1 tablespoon of the flour mixture. Place the blueberries in a separate bowl and toss the berries with the 1 tablespoon flour (this will help prevent the blueberries from sinking to the bottom of the pan during baking.) In the bowl of your electric mixer, or with a hand mixer, beat the butter until softened (about 1 minute). Scrape the batter into the prepared pan and bake for about 55 to 65 minutes, or until the bread is golden brown and a toothpick inserted in the center comes out clean. Lemon Glaze: In a small microwaveable bowl, stir the sugar with the lemon juice. When the bread is done, remove from oven and place on a wire rack. Makes 1 loaf. Related:  berry • Tested & Loved

Earl Grey Cupcakes with Lemon Buttercream | The Seventh Duchess The Seventh DuchessBlogRecipesEarl Grey Cupcakes with Lemon Buttercream Archives Yields: 12 – 15, I halved the original recipe For the cake: 1/2 cup unsalted butter, at room temperature 1 cup of sugar 2 eggs 1 1/2 cups of flour 2 tbsn. baking powder 1/2 tsp. salt 1/2 cup milk 2 teaspoons of “Mon Amour” French Earl Grey by The Seventh Duchess 1. 2. For the icing: 1/2 cup unsalted butter 2 cups of icing sugar zest of 1 lemon 1 1/2 tbsn. lemon juice 1. *Image: Strawberry Banana Milkshake Cake BREAKING NEWS–This boy got a proposal. Not that kind of proposal–I still don’t have a ring on my finger. Instead of laying low for July 4th, M proposed that we take an extra vacation, so we won’t be participating in this year’s Pride festivities in NYC, even if that means missing Cher performing at the Pier Dance. From the emails and phone calls I’ve gotten from friends, it sounds like the community event of the summer. This year, instead of doing a rainbow dessert for Pride, I thought I’d leave the boys a little gift for the weekend celebration–a Strawberry Banana Milkshake Cake. If you make this cake and fill the yard—perhaps you’ll catch a mensch, like I did. yield: One 9-inch cake recipe adapted from Cook’s Country Ingredients Directions 1. 2. 3. 4. 1. recipe adapted from America’s Test Kitchen 1. 2. 3. 4. 5. Strawberry Cake layers Banana Cake layers Strawberry Milkshake Frosting Strawberry Preserve (optional) 1 pint fresh strawberries, for garnish, washed and dried 1. 2.

strawberry summer cake It is not summer yet. In fact, it’s been raining for more than a week, and another week — the one in which I presume we’ll be introduced to our new mosquito overlords — is promised. In fact, it was so cold that I met a friend for lunch today and had to wear both a light wool sweater and a jacket. It’s almost like summer looked at New York City and said “pbbbblt!” But I know it’s coming. I hope this will be your summer cake. And your apartment will smell like a strawberry patch. One year ago: Rustic Rhubarb TartsTwo years ago: Raspberry Buttermilk Cake and Slaw TartareFour years ago: Cellophane Noodle Salad with Roast Pork Strawberry Summer Cake Adapted, only slightly, from Martha Stewart I recently picked up some barley flour and fell in love with it. I am ever-so-slightly on the fence about the sweetness of this cake. Preheat oven to 350°F (180°C). Whisk flour or flours, baking powder and salt together in a small bowl. Pour into prepared pie plate.

Earl Grey Tea, Blueberry and Lemon Cake a.k.a the most sophisticated loaf cake you’ll ever eat. (There’s poppy seeds in there too – HELlo – but that would make the title even longer than it already is). The loaf cake started out as an idea for a flavour pairing whilst I was drinking a cup of Earl Grey. It has always been my favourite tea – there’s something so dreamy about the aroma, exuding calmness and comfort. As it has a bunch of flavours going on in it too, it makes an ideal tea for infusing into foods, too! At first I tried straight up throwing tea leaves into the batter – it didn’t really do much though. I decided to not give up on the cake, and tried another round of lets-try-to-get-tea-into-my-cake. SO I tried a) reducing the sugar, b) increasing the butter (fat is flavour, yo) and c) actually adding brewed tea (very, very strong tea) and the leaves to the batter. Having my tea and eating it too. Side note: I blame that on my friends for telling lame jokes around me too often. Ohkay, back to cake story time. 2 eggs

Perfect Avocado Brownies with Cinnamon and Blueberries (vegan) | Sugar and Cinnamon Vegan, optional Gluten, Refined Sugar and Oil Free This is such a momentous day. I finally, finally perfected avocado brownies. Celebrate with me! It’s been a long and arduous journey, but we made it. But seriously. I’ve made a few healthy brownies on this blog before. They shouldn’t taste like banana or almonds or orange or any other such nonsense! My experiments started to take a turn for the awesome when I bought My Darling Lemon Thyme‘s new cookbook. Over a series of experiments I replaced the olive oil with avocado to squeeze in those healthy fats, and replaced the combination of gluten-free flours with wholemeal wheat. The result was incredible. The combination of sweet blueberries, cinnamon and vanilla extract add natural sweetness that in my mind tastes much better than plain old sugar. One Year Ago: Rhubarb and Coconut Crumble Slice Avocado and Blueberry Brownies: Adapted from here 200g (7 ounces) dark vegan chocolate, broken into chunks (plus extra 50g chopped) 1 tbsp olive oil

Katiecakes: Earl Grey Cupcakes Everyone loves a cup of tea, and those who don't... well I simply don't trust them. As my fiancee delves deeper into his love of coffee I find myself drinking more exotic and exciting teas in a vain attempt to tempt him away from his espresso machine. My cupboards are bulging with dozens of different varieties, loose leaf, bags, flowering you name it, I have it! Even with all of these colourful and tasty teas adorning my shelves I always come back to the same two favorites, a good old cup of builders brew (you can't beat it) and a steaming cup of Earl Grey. I've made these cupcakes tonnes of times and they never disappoint. Earl Grey Cupcakes(from Primrose Bakery) Ingredients: 125 ml milk 4 Earl Grey tea bags (or you could sub with your favorite variety) 110g unsalted butter 225g granulated sugar 2 large eggs ¼ tsp almond essence (optional) 125g self-rising flour 120g plain flour Frosting: Method: Preheat oven to 180c/ gas mark 4. Combine the flours in a separate bowl.

Monkey Muffins Print Recipe Posted by Ree in All PW Recipes , Breakfast , Christmas , Tasty Kitchen Featured , Thanksgiving I made cinnamon rolls and dinner rolls over Thanksgiving weekend, and was left with a medium-sized bowl of extra dough. I don’t know how it happened, but it did. I was also left with another kind of roll—the kind that makes low-rise jeans a problem. I didn’t want to roll out cinnamon rolls again—I mean, how many thousands of cinnamon rolls can one woman make in a 48-hour period? I grabbed a muffin tin and wound up making sort of a modified muffin version of monkey bread—and everyone loved them. I put half a pat of butter (so, 1/2 teaspoon) into muffin tins. Then I put a little under a teaspoon of sugar into each tin. Did you read what I wrote? Next, I dumped in 1/4 teaspoon ground cinnamon. Then I grabbed the leftover dough (it was cold in the fridge) and rolled three small (walnut-size) balls of dough. Then came about 1/3 teaspoon sugar, just to round things out. And that’s it!

Legendary Blueberry Biscuits recipe on Food52.com Cooking is more fun with friends. Find your friends who are already on Food52, and invite others who aren't to join. Let's GoLearn more Join Our Community Follow amazing home cooks. Collect recipes and articles. Sign Up ♥ 274  Save ▴ If you like it, save it! Save and organize all of the stuff you love in one place. Got it! If you like something… Click the heart, it's called favoriting. Author Notes: In North Carolina, the fast food chain Bojangles has a monopoly on biscuits. Food52 Review: You can't go wrong with a combination of summer's best fruit folded into pillowy biscuit dough. Serves 8 Blueberry Biscuits 1 1/4 cups all-purpose flour 2 teaspoons baking powder 1/4 teaspoon baking soda 1/2 teaspoon salt 2 tablespoons unsalted butter, frozen for about 10 minutes 1/2 cup buttermilk 2 tablespoons heavy cream 3 tablespoons Greek yogurt 1 egg yolk 1/2 teaspoon vanilla extract 1 cup blueberries (frozen are easier to handle) 4 tablespoons granulated sugar Icing

Espresso Brownies September 18, 2010 Espresso Brownies Something deep and sweet – extremely sweet. I have had Nick Malgieri’s book the Cookies Unlimited for many years. Now that I am in the Baking 101 spirit, I flipped through it and decided to try out the recipe for espresso brownies. I drink a lot of coffee at work – a slice of the brownies is a really pick-me up. Espresso Brownies Ingredients:57 g butter 57 g dark chocolate, chopped coarsely 2 eggs 1 tbsp instant coffee 1/4 tsp salt 200 g sugar 64 g flour 20 cm square pan, buttered and lined with buttered parchment or foilDirections:Preheat oven 180 degree Celcius.Melt butter in a small saucepan. Step by Step

Cinnamon Rolls With Whipped Cream Cheese Frosting Happy Friday everyone! Sorry for my lengthy post-valentines day hiatus. The third trimester has made me a little slow in the kitchen and I've had my hands full with family. Like my mother, who was in town last week and thinks a day at the spa is a better use of my time than baking (hey, I'm not going to argue). Mr. Of course, once I actually got my wish for a pan of delicious freshly made cinnamon rolls, I spent more time eating them than photographing them. Photographing food while pregnant is hard! So let's get down to the how-to. You will find that this recipe is far simpler than the sourdough cinnamon rolls found on NSHP. Alright, I'm going to let my resident dough-maker and crazy pregnant woman care-taker commandeer the laptop and give you the run down for this dough. Over to you Mr. Mr. As you might have noticed, everything is by weight. I have active dry yeast on hand, but you can use other types as well. Weigh out your dry ingredients, and whisk them thoroughly to combine. (Ms.

Devil’s Mini-Cupcakes with Lemon Cream Cheese Frosting I made these little cakes for my son’s school birthday party. We’d been arguing for a while if they should (or should not) have colored sprinkles on their tops. Tim kept saying that the sprinkles could significantly increase the cupcakes’ popularity. Well, I had my own counterarguments, and I won after all. They were very well received nevertheless. The cupcake batter is a famous Flo Braker’s devil’s food cake; the one that Alice Medrich tried to improve but couldn’t make it any better. Makes 48 mini-cupcakes For the cupcakes: 2 cups (7 oz) sifted (before measuring) cake flour1 tsp baking soda¼ tsp salt½ cup sifted natural cocoa powder½ cup lukewarm water½ cup buttermilk, at room temperature½ cup water2 tsp pure vanilla extract2 large eggs, at room temperature8 tbsp (1 stick, 113 g) unsalted butter, at room temperature1 cup fine granulated sugar1 cup packed light brown sugar For the frosting: Zest of 1 large lemon 1 tsp pure vanilla extract1 tsp pure lemon extract Make the cupcakes: