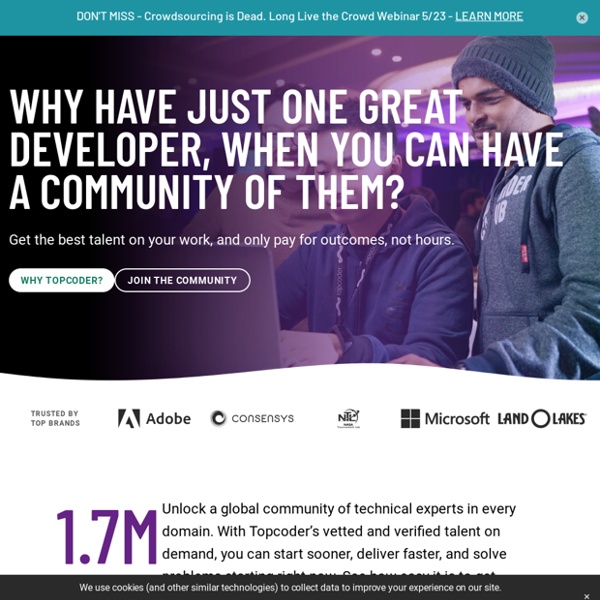 Microwork Microwork is a series of small tasks which together comprise a large unified project, and are completed by many people over the Internet. [1] [2] Microwork is considered the smallest unit of work in a virtual assembly line. [3] It is most often used to describe tasks for which no efficient algorithm has been devised, and require human intelligence to complete reliably. The term was developed in 2008 by Leila Chirayath Janah of Samasource. [4] [5] Microtasking[edit] Crowdsourcing's Champions (GE, OMC, SNE, WEN) Crowdsourcing is all the rage these days, another aspect of the cloud computing proliferation that has companies doing crazy things. Even if you have never heard of it, you have probably purchased a product that was developed using crowdsourcing or have been directly involved yourself. Crowdsourcing is the outsourcing of idea generation or tasks that would normally be tackled by employed workers or contractors for a particular company. The task or idea is outsourced to the masses via the Internet or social media technology. Crowdsourcing can be more than just a task or an idea.

Crowdsourcing Crowdsourcing is a sourcing model in which individuals or organizations obtain goods and services. These services include ideas and finances, from a large, relatively open and often rapidly-evolving group of internet users; it divides work between participants to achieve a cumulative result. The word crowdsourcing itself is a portmanteau of crowd and outsourcing, and was coined in 2005.[1][2][3][4] As a mode of sourcing, crowdsourcing existed prior to the digital age (i.e. Crowdsourcing specific microtasks Since the first-ever Mechanical Turk meetup a year ago, there has been an explosion in crowdsourcing services and a well-attended conference in San Francisco. I remain enthusiastic about crowdsourcing, but the number of companies has me worried about quality of work. Fortunately specialization is already occurring, so for particular tasks there are companies out there ready to provide high-quality service. One company that recently caught my eye is Helsinki (and SF) based Microtask. Founded by Computer Graphics (CG) and Computer Vision (CV) veterans, Microtask has chosen to focus in a few areas where CG and CV are relevant. Aside from speech transcription, they currently provide form-processing (digitizing hand-written forms) and archive digitization services, and have plans to expand into image categorization and video indexing in the near future.

HorizonWatching Online Community Managers typically wrestle with the problem of how to encourage more participation in online community platforms. The secret is to figure out what the community members value and deliver more of that good stuff to them. As a long time Community Manager, I have always been a proponent of more dashboard tools designed to help the Community Manager solve this problem. Sophisticated analytical tools can help managers understand their membership demographics and behavior as well as help managers do a better job of delivering content and activities that the community members will respond to.

Solver Develops Solution to Help Clean Up Remaining Oil From the 1989 Exxon Valdez Disaster Boston, MA and Cordova, AK - November 7, 2007 - InnoCentive, the leader in prize-based Open Innovation sourcing, is helping to make a positive impact on Environmental Conservation by working with the Oil Spill Recovery Institute (OSRI) and other conservation groups. OSRI has posted 3 Challenges on the InnoCentive website, all dealing with oil spill recovery issues. The first of these challenges was solved last week by an oil industry outsider who used his expertise in the concrete industry to come up with the winning solution. Mobile App Challenge Home Latest App News Run Your Own Contest Blog INNOVATION ON THE EDGES One of the things that we haven't done very well is we've been looking at science and technology as trying to make things more efficient, more effective on a local scale, without looking at the system around it. We were looking at objects rather than the system, or looking at the nodes rather than the network. When we talk about big data, when we talk about networks, we understand this. I'm an Internet guy, and I divide the world into my life before the Internet and after the Internet. I helped build one of the first commercial Internet service providers in Japan, and when we were building that, there was a tremendous amount of resistance. There were lawyers who wrote these big articles about how the Internet was illegal because there was no one in charge.

Personal Internet Fundraisers It will take anywhere from 3 seconds to 1 minute for your pic to upload, depending on how big it is. You're going to see this message every time you post a new pic. So, we're making the text really long so that it'll take you at least five picture uploads to read it all. Here's what we're thinking...While your first picture is uploading think about someone you want to kiss. When you upload your second pic think about one friend who you can beat in a race.