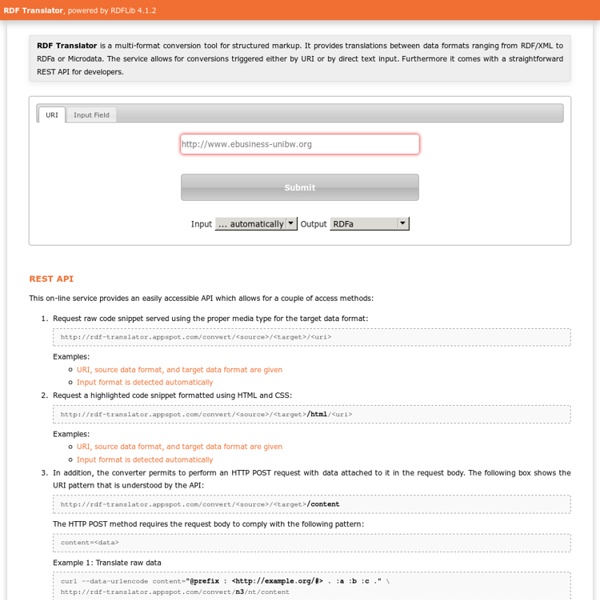 RDF 1.1 Primer Abstract This primer is designed to provide the reader with the basic knowledge required to effectively use RDF. It introduces the basic concepts of RDF and shows concrete examples of the use of RDF. Secs. 3-5 can be used as a minimalist introduction into the key elements of RDF. Changes between RDF 1.1 and RDF 1.0 (2004 version) are summarized in a separate document: "What's New in RDF 1.1" [RDF11-NEW]. Status of This Document This section describes the status of this document at the time of its publication. This document is part of the RDF 1.1 document suite. This document was published by the RDF Working Group as a Working Group Note. Publication as a Working Group Note does not imply endorsement by the W3C Membership. This document was produced by a group operating under the 5 February 2004 W3C Patent Policy. Table of Contents 1. The Resource Description Framework (RDF) is a framework for expressing information about resources. 2. 3. 3.1 Triples Example 1: Sample triples (informal) Note

Flint SPARQL Editor Demo Welcome to Flint, our editor for SPARQL queries. Features Flint 1.0 is now available. This is our first production release. This version supersedes Flint 0.5.1 which was released June 2011. Flint has the following features: Flint should work in Firefox, Chrome, Safari and Opera. Getting the Code Flint has been released with an open license for deployment on your own site. Feedback If you have comments, suggestions or bug reports please send them to flintsparqleditor@tso.co.uk

Problems of the RDF model: Blank Nodes There is a number of challenges regarding the realization of the Semantic Web vision. In the series of blog posts to follow, I’ll be focusing on the Linked Data field and the ideas, technologies and standards it’s based on. I’ll analyze the problems of the three important aspects of Linked Data: the RDF model, the RDF notation and the drawbacks of Linked Data itself. Problems regarding the RDF model RDF is a data model that represents knowledge in the form of simple statements called RDF triples, which consist of a subject, a predicate and an object, like a simple sentences in a human language. In RDF, there are three types of nodes – URI references, blank nodes and literals. The RDF model is based on a simple idea, but it has problems that make it unnecessarily complicated, thus decreasing its value. the existence of nodes that have no nameproblems associated with the literalsthe lack of a unique concept of the node Blank nodes Not always. next post: Problems of the RDF model: Literals »

Tools - Semantic Web Standards Overview This Wiki contains a collection of tool references that can help in developing Semantic Web applications. These include complete development environments, editors, libraries or modules for various programming languages, specialized browsers, etc. The goal is to list such tools and not Semantic Web applications in general (the interested reader may consider looking at the W3C SW Use Case Collection for those.) The tool content of this wiki is still to be maintained by the community and not by the W3C staff. Search possibilities The current Wiki contains references to 336 tools. Search through categories, i.e., reasoners, programming environments, browsers, etc. Last modified/added Tool Data in RDF There is also an option to get one RDF/XML graph for all tools. Other resources There are other pages on tool collection out there, largely overlapping with this, but possibly with a different granularity or emphasis. Sweet Tools maintained by Michael K. History

FOAF-a-matic -- Describe yourself in RDF Written by Leigh Dodds. Introduction FOAF-a-matic is a simple Javascript application that allows you to create a FOAF ("Friend-of-A-Friend") description of yourself. You can read more about FOAF in Edd Dumbill's "XML Watch: Finding friends with XML and RDF" article, at the FOAF homepage on RDFWeb, and also the FOAF vocabulary description. In short though, FOAF is a way to describe yourself -- your name, email address, and the people you're friends with -- using XML and RDF. This allows software to process these descriptions, perhaps as part of an automated search engine, to discover information about your and the communities of which you're a member. The FOAF-a-Matic is being provided as a quick and easy way for you to create your own FOAF description. Note: none of the information you enter in this page is used or stored in any way. If you have comments about this application, or further questions about FOAF, why not join the RDFWeb-dev mailing list? People You Know Generate Results License

RDF - Semantic Web Standards Overview RDF is a standard model for data interchange on the Web. RDF has features that facilitate data merging even if the underlying schemas differ, and it specifically supports the evolution of schemas over time without requiring all the data consumers to be changed. RDF extends the linking structure of the Web to use URIs to name the relationship between things as well as the two ends of the link (this is usually referred to as a “triple”). This linking structure forms a directed, labeled graph, where the edges represent the named link between two resources, represented by the graph nodes. Recommended Reading The RDF 1.1 specification consists of a suite of W3C Recommendations and Working Group Notes, published in 2014. A number of textbooks have been published on RDF and on Semantic Web in general. Discussions on a possible next version of RDF W3C has recently set up a new RDF Working Group, whose charter is to make a minor revision of RDF. Last modified and/or added All relevant tools

RDFa Distiller and Parser This distiller corresponds to the RDFa 1.0 specification. In 2012, W3C has published an updated version of that specification, called RDFa Core 1.1. A new distiller, processing RDFa 1.1 content, has been implemented which suprecedes this one. Note that the new distiller can also process RDFa 1.0 content (there are some minor incompatibilities) if the XHTML+RDFa file uses the right (RDFa 1.0) DTD and/or the @version attribute. If you intend to use this service regularly on large scale, consider downloading the package and use it locally. What is it? RDFa is a specification for attributes to be used with XHTML or SVG Tiny to express structured data. pyRdfa is a server-side implementation of RDFa. Distiller options Output format (option: “format”, values: “xml”, “turtle”, “nt”) The default output format is RDF/XML. Warnings (option: “warnings”, values: “true”/“false”) Parser options (option: “parser”, values: “lax”/“strict”) (Note that the HTML5 parser is work in progress, errors may occur.

QR Code - Générateur de QR Codes Personnalisés - QR Codes Design SWValidators - Semantic Web Standards This page tries to collect what the current situation is with SW related validators what could be added with a reasonable amount of work The page was created after Semantic Web Coordination Group discussions, noting that the current RDF validator has not been actively developed for several years. While it is functional and serves a basic purpose, there is always the potential for improvements. Meanwhile, the RDF family of W3C standards has grown; we now have a query language (SPARQL), also based on RDF patterns; a powerful ontology language (OWL), rules framework (RIF) and more options for encoding RDF data (GRDDL, Turtle etc). Please don't hesitate to edit this page with links to other tools that check conformance to W3C Semantic Web standards, or which help developers and software check conformance of RDF/OWL etc data to particular application needs. Current validators (listed on this site) What can be added Related Links

15 amazing tools for online collaboration | Design Individuals in design teams don't always work together in the same office. You may be positioned in distributed groups, or working from home, and clients can come from all over the world. This is where collaboration tools come in – they make it easier and faster for designers to get feedback and approve artwork in a professional manner, and they come in all sort of forms, from free Android apps to Chrome extensions. Here we gather together some of the best available online tools to allow designers to collaborate together in real time. Some are created specifically for designers, some serve as a concept crafting whiteboard, and we've also included some more full-on project management tools for when you need to take your collaborative project to the next level. 01. Want to improve communication with your team? Perfect for anyone managing a team of remote employees, Slack enables project development to move forward more smoothly. 02. 03. 04. 05. appear.in 06. 07. 08. 09. 10.

Microformats What is difference b/w rdfs:domain and rdfs:range.? From a very simplistic point of view, the domain and range properties are there to give you insight into the way that the property links a subject to an object. In the case of the domain property, when you link a subject to an object using a property with this associated attribute, then the subject qualifies as a type of thing specified in the domain. For example, we look at a vocabulary and we see that the domain of the the "drives" property is a "Person" so, simply put, as long as the subject being is described using the “drives” attribute is a type of "Person" (or could be a type of "Person"), then you should have no problem going ahead using that term to describe that thing, because most other people will interpret that if something is described using this term, then it is a "Person". You'll find it is not only humans but also machines (or reasoners in this case) that make the same inferences.

Datawrapper Easy to use Upload your data, choose a chart or map and publish - done. There are options to use this tool for free and paid services for single users, teams and organizations. Learn more... Customize This tool is build for customization to your needs. Full control Datawrapper is open source software. Created with Datawrapper More than 40.000 users have so far created more than 100.000 charts. Who uses Datawrapper? Datawrapper is here to simplify the creation of embeddable charts. Datawrapper is open source Users should have more control over data and software they use. Fork on Github How can we help you use this tool? We offer a range of services that help you use Datawrapper. Datawrapper Basic Free You can create charts, but then will need to download manually and upload yourself to a blog or website. Sign up now Datawrapper Single 12 Euros for 30 days, with the option to hop-on/hop-off. For single users. Learn more Datawrapper Team 100 Euros per month Learn more Datawrapper Pro Chart layouts