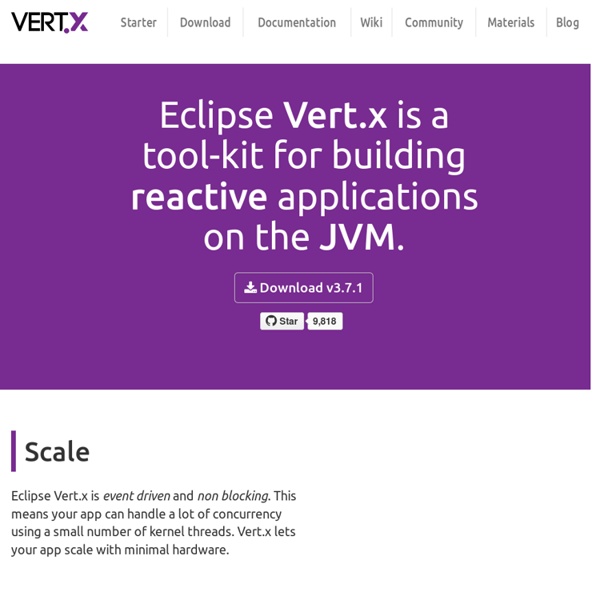 How To Write A Dead-Simple Online Network Drive using Java & WebDAV | North Concepts There are a variety of ways you can enhance your application with WebDAV access which we will be going into in a latter part of the WebDAV series. For now we will show you how to create a basic online network drive using WebDAV via Milton, a Java WebDAV Server library. Example We will write the logic to create a network drive containing just one file, scratchpad.txt, which can be modified at will from any location where the drive is mounted. You may want to load the project into your IDE so that you can follow along. Step 1: Create The Domain Object This is a simple POJO which will allow us to hold some text and attributes which will nicely represent a virtual scratchpad.txt file. Step 2: Create The Equivalent Resource Class As A Composition In this step, we have created a class with a “has-a” relationship with the original domain object. To keep the file-structure analogy going, we should have a root folder to contain our one file. That’s it! Concluding Thoughts Download

Notes from the Relevance Postcast episode about Pedestal | The Relevance Podcast episode 27 featured Tim Ewald talking about the Clojure web framework Pedestal. Here are my raw notes that I took while listening to that. I figured they might be useful for somebody else too. What is it? Separation between app (clojurescript) and services (clojure). They like building stuff in Clojure. Browser based apps are more exposed than server based ones. Server side Services are based on an abstraction called an interceptor. Client side Imagine creating a word processor as a web app. Why giving this away? Still far from done. Ring and interceptors Interceptor is more complex than ordinary Ring model. Linking and routing Route table maps requests onto the interceptor path. Documentation Working on it. Debugging Debugging is easy, you can verify from command line using curl to see if the problem is client-side or server-side. The name “Pedestal” Tim has a background in building architecture.

Spring Atmosphere/atmosphere Vert.x 3 MongoDB Conf The client is configured with a json object. The following configuration is supported by the mongo client: db_name Name of the database in the mongoDB instance to use. useObjectId Toggle this option to support persisting and retrieving ObjectId’s as strings. The mongo client tries to support most options that are allowed by the driver. connection_string The connection string the driver uses to create the client. Specific driver configuration options Driver option descriptions host The host the mongoDB instance is running. port The port the mongoDB instance is listening on. hosts An array representing the hosts and ports to support a mongoDB cluster (sharding / replication) A host in the cluster The port a host in the cluster is listening on replicaSet The name of the replica set, if the mongoDB instance is a member of a replica set maxPoolSize The maximum number of connections in the connection pool. minPoolSize The minimum number of connections in the connection pool. maxIdleTimeMS maxLifeTimeMS

Web Framework - Learn About Cappuccino and Objective-J What is Cappuccino? Cappuccino is an open source application framework for developing applications that look and feel like the desktop software users are familiar with. Cappuccino is built on top of standard web technologies like JavaScript, and it implements most of the familiar APIs from GNUstep and Apple’s Cocoa frameworks. When you program in Cappuccino, you don’t need to concern yourself with the complexities of traditional web technologies like HTML, CSS, or even the DOM. The unpleasantries of building complex cross browser applications are abstracted away for you. Cappuccino was implemented using a new programming language called Objective-J, which is modelled after Objective-C and built entirely on top of JavaScript. Designed for Applications Nobody will deny that there is a distinct difference between a web site and a desktop application. Instead of doing all or most of the work on the server, Cappuccino applications do as much as possible in the client. Browsers Cocoa sample code

Getting Started with GitHub | Christophe Geers' Blog Introduction Been a couple of months since I got around to writing a new post for this blog…busy times. Just got back from a company team building event in Tunisia last weekend. During this event we held 6 sessions about various topics such as Web API (@JefClaes), Roslyn (@svenschelfaut), Solid…etc. I gave a session about using various alternative technologies (read as: non Microsoft) to build a web application from scratch. These included: So we’ve got everything from source control (GitHub), to layout (Bootstrap), database (MongoDB), client-side data binding / UI refreshes / … (Knockout) and deployment (AppHarbor). Let’s discuss the first part in this article, namely GitHub. Table Of Contents Signup at GitHub Of course you need to signup at GitHub. Once you’ve signed up and your account is in order, go ahead and download the GitHub for Windows client. The installation is straightforward. On the lefthand side you see two categories, local and github. Top of page Your First Repository Cloning

Hibernate. Everything data. - Hibernate Async-IO.org: Powering the Atmosphere Framework Undertow, Vert.x, and Netty Benchmarks - Miles to go 2.0 ... 90 frameworks (including web application platforms, full-stack frameworks, and micro-frameworks) are compared using 230 tests by Tech Empower. The tests execute fundamental tasks such as JSON serialization, database access, and server-side template composition. Read more about the tests introduction, permutation, and environment details. Complete results from Round 8 are explained here. Undertow is the new web server in WildFly 8 and did pretty well with consistently staying in top 10 in all categories, especially given that the server is written from scratch. Here is a snapshot of some of the results: Top 3 frameworks here are by Red Hat WildFly 8 was recently released and uses Undertow as the web server.