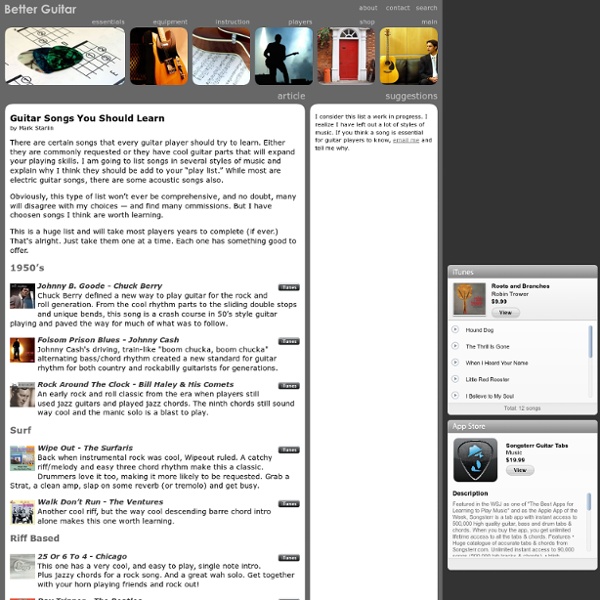 There are certain songs that every guitar player should try to learn. Either they are commonly requested or they have cool guitar parts that will expand your playing skills. I am going to list songs in several styles of music and explain why I think they should be add to your “play list.” While most are electric guitar songs, there are some acoustic songs also. Obviously, this type of list won’t ever be comprehensive, and no doubt, many will disagree with my choices — and find many ommissions. But I have choosen songs I think are worth learning. This is a huge list and will take most players years to complete (if ever.) Johnny B.

30+ Insanely Useful Websites for Guitarists The guitar is an instrument that knows no genre and no boundaries--one of the reasons why it's arguably the world's most beloved instrument. Here are over 30 incredibly useful (and often entertaining) websites dedicated to the guitar and its admirers. Must-see sites Know Every Note on the Guitar in 9 Days Knowing every note on the guitar is a challenge unique to the instrument. A saxophone has only one way to finger each note, while a guitar usually has a few different strings and four fingers to choose from. String a few notes together and the permutations of how to play them will wreck your brain. Pianists have a similar problem with ten available digits, but you can memorize the notes on a keyboard in a matter of minutes; the same pattern of white and black keys repeats every octave. The challenge with navigating the guitar fretboard is its two-dimensional layout. It’s a matrix, while nearly every other instrument has a linear path of notes from the bottom to the top of its range.

Stairway To Heaven Guitar Tab by Led Zeppelin Your Flash Player (ver. ) is outdated - Songsterr will support it for a very limited time. All new features are added to (or later) version only. Please upgrade to the latest Flash Player! Learning and Loving Music Theory Kelvin, You actually caught a mistake on the roman numerals! Thanks, I’ll have to fix that. The first and last chords of the progression are not 7th chords. Somehow I inadvertently typed “I7″ on the first chord of all the major keys. I Will Destroy This Robot Sheet-Music Sight-Reader, I Swear I Will Sight-reading complex musical notation takes years of training, hundreds or thousands of hours of practice, sitting in front of the piano, a metronome drilling its infernal clicks into your brain. Eventually you'll gain the ability to read and perform just about any piece of music that's set in front of you, without ever having seen it before. It does not come easily, and it is not a natural skill; you have to keep practicing to retain it. Each month you don't practice takes two months to earn back the power you've squandered. It is a human achievement, a way in which we force our brains and fingers and feet and eyes to perform a task we are not born able to do.

Top 50 Youtube Guitar Channels The Top 50 Youtube Guitar Channels covers lessons, magazines, manufacturers, guitar stores, reviews, guitarists, and pretty much everything guitar centric. All of the channels below had reached at least 2 million total views by March of 2012. Our focus was on channels producing high quality guitar videos at regular intervals. 1. The Aesthetics of Popular Music Popular music is widely assumed to be different in kind from the serious music or art music that, until very recently, monopolized attention in philosophical discussions of music. In recent years, however, popular music has become an important topic for philosophers pursuing either of two projects. First, popular music receives attention from philosophers who see it as a test case for prevailing philosophies of music. Even now, most philosophy of music concentrates on the European classical repertoire.

Intervals Objectives Learn all the intervals.Learn the fretboard patterns for the intervals.Learn both ways to play intervals. What Are Intervals? An interval is the pitch difference between two notes. Pitch differences can be viewed in different ways. 10 Essentials On Guitar Improvisation Photo by Simone13 AKA John Pastorello Besides writing and playing songs I just love improvising. When I practice improvising I always first pour myself a cup of green tea, I put on some folk music (e.g. 10 interesting chords you've probably never used before Blog Published on September 28th, 2011 | by Caesar (ENGAGE) If you’re like me and likes experimenting with their music, You’re going to like this one! Play The 7 Modes in 7 Days (Tabs Incl.) Photo by Marta Monleón Modes are used in all kinds of musical styles like Jazz, Rock, Metal, Flamenco, etc. They create a certain mood or feel to your playing.

The 13 scariest pieces of classical music for Halloween Celebrate Halloween in macabre style with these bone-chilling masterpieces! Mussorgsky: Night on Bald Mountain The image of brooding, winged ghouls wreaking havoc on a mountain village under cover of night has terrified generations of young children in Walt Disney's Fantasia. Inspired by Russian legend, Mussorgsky's tone poem depicts the dark ritual of a witches' sabbath. Sadly, it was never performed in his lifetime, but the arrangement by his friend Rimsky-Korsakov has become a concert blockbuster. The version used in Fantasia was orchestrated by Leopold Stokowski.

7th Chords on the piano - Week Ten - One of the most valuable chord types you'll ever learn... Hello again, and welcome to the next edition of the newsletter.