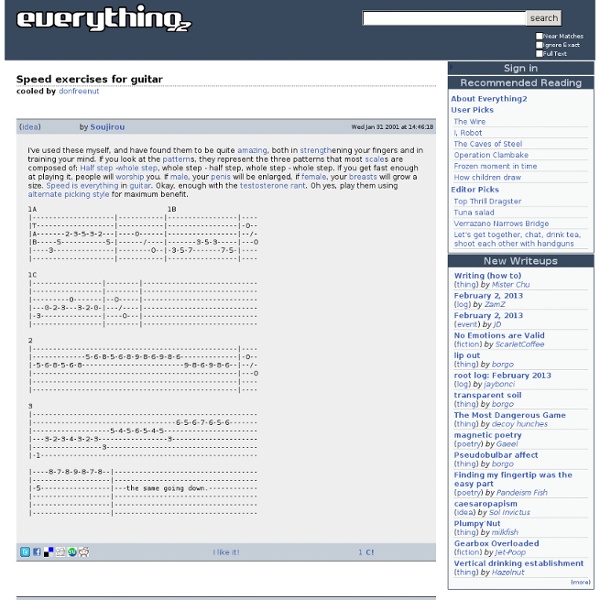 I've used these myself, and have found them to be quite amazing, both in strengthening your fingers and in training your mind. If you look at the patterns, they represent the three patterns that most scales are composed of: Half step -whole step, whole step - half step, whole step - whole step. If you get fast enough at playing it, people will worship you.

Learn The Guitar Fingerboard Thoroughly in 16 Days Photo by John W. Tuggle If I have to name two things that took my guitar playing to the next level I would say music theory and memorizing the fingerboard. It made me understand the big picture. Combining music theory (understanding scales, modes, chord structure, improvising over chord progressions, etc, etc.) and knowing all the notes on the fingerboard will open up a whole new world. Guitar playing becomes more fun when you know what, when en where to play it on the fingerboard. When you want to know where to play any type of chord shape instantly it’s pretty helpful if know the notes. To know the name of the chord you need to know all the notes on the low E-string. A Bb major chord shape (x13331) can also be played on any fret. To know the name of this Esus2 chord shape: (xx2452) on any fret you need to know the notes on the D-string. The same applies to scale shapes, triads, arpeggios, licks, etc. Here’s how you do it: First things first. Example 1: A A# B C C# D D# E F F# G G# A

Music Theory For Songwriters 21 Cool 3 Notes-Per-String Exercises to Rock On! | GuitarHabits.com Photo by Jsome1 Playing 3 notes per string exercises is something I do on a regular basis. I use them to warm up, to become a faster guitar player and to spice up my improvisation. 3 notes per string licks and scales are generally used for speed picking. Whenever you hear a guitar player playing these really fast terrifying licks, it’s probably a 3 notes per string lick. Paul Gilbert of Mr.Big is one of many great experts in this field. If you practice these exercises properly and often enough you will increase your speed. The 3 notes per string exercises are played using the alternate picking technique. Once you get the hang of it, it can become quite addictive, but be careful though. The one and only reason why these monster guitar players become so incredibly fast is that they practice long hours for days, weeks, months and years.

Free Guitar Lessons - Lesson Index Complete list of lessons and pages on this site. Related YouTube videos will have an index number in the name of the video - so just look for that number below and you should find everything ok :) Or you could use the seach box above, but many times a big list like this seems to be easier! Quick Skip to Prefix Anchors Just click on the prefix below and it will zoom you down the page to that area! PR - Products PR-000 • The Products Index *** this page has all the products listed by difficulty! PR-667 • DVD Download Page (ISO Files) - burn your own DVD's from these big files! PR-099 • Bundle Packs (SAVE LOTSA MONEY HERE!) DVD PR-004 • Solo Blues Guitar PR-005 • Master The Major Scale PR-007 • Really Useful Strumming Techniques PR-008 • Really Useful Strumming Techniques II PR-033 • Blues Lead Guitar PR-050 • Awesome Guitar Licks (01-20) PR-111 • Justin's Beginner Guitar Method (4 DVD Box Set) Books (paper ones!) PR-701 • Raod Rat's Tips by Pete Cook PR-301 • Transcribing Course PLUS

Cool Jazz Chord Progressions for Guitar | LoveToKnow - StumbleUpon Are you looking for some cool jazz chord progressions for the guitar? Sometimes guitar players who are coming from a blues, folk or rock background think that jazz music is a cacophonous assortment of random notes. While such an argument could be made about some forms of free jazz, many jazz songs are based around standard progressions that aren't much different than the progressions found in other forms of music. Read on to learn more about some really cool jazz chord progressions for guitar. Get a Chord Chart Before you read on, you need to take a quick detour and download LoveToKnow's free chord chart if you haven't already. The chords employed in jazz music typically are more extended than they are in rock, folk and blues. Some Cool Jazz Chord Progressions for Guitar Now that you have your chord chart handy, you're ready to tackle some cool jazz progressions. This progression, known as the "one/six/two/five" is one of the most common progressions in jazz music. Find a Friend

How to Make an Orca (Shachi) from a Plastic Straw (with pictures) Edited by TOHGIN minako, Krystle, Flickety, Eric and 12 others You might not think you could create a creature as powerful as the 鯱 (pronounced "shachi," which means "killer whale," or "orca" in Japanese) out of a plastic straw, but you can. Follow along with this step-by-step guide to make your own delicate orca. Ad Steps 1Note the terminology applying to each piece of the straw. 12 Add eyes. Tips When you're pinching the straw and cutting it into thin sticks, consider using safety scissors. Key Chords Key Chords app generates guitar chord progressions automatically. Use it free online, or get the app for Mac, Windows or iOS (iPad) - Click on a chord to preview how it sounds. - Drag and drop to arrange the chord progression - Tweak the settings to control the playback speed Or role the dice and Key Chords will automatically generate a nice sounding progression. Select a Key: Select a key and choose a the major or minor scale. The resulting chord chart will display applicable chords for the selected key. Click a chord: ... and you will hear a cheap computer generated guitar playing the chord. Drag & Drop: - Chords from the chart into the progression timeline. - Rearrange Chords in the progression. - Remove chords from the progression. Roll the Dice: ... and a random chord progression will appear in the timeline. The numbers below each chord in the progression refer to the number of "beats" the chord will linger for. The "Rake Speed" refers to the speed of a single "strum." The main chart areas.

Slide Guitar Lesson: Statesboro Blues Slide Guitar Licks | Learning Guitar Now: Slide, Blues, and Beginner Guitar Lessons. Do you want to learn one of the most popular slide guitar songs of all time? If you said yes, then you definitely have to learn Statesboro Blues by the Allman Brothers Band. Originally written by Willie McTell in 1928 and was remade by the Allman Brothers Band on their excellent live album “Live at the Fillmore East.” Anyone that wants to learn to play slide guitar, MUST learn this song. The slide guitar licks are just tasty, lyrical, and the epitome of electric slide guitar. I’m going to show you the first 2 licks of the song contained in the intro. The first 2 slide licks use major and minor notes all located around the 8th and 10th fret. Check it out. So go and check out Statesboro Blues and absorb some of the best slide guitar licks ever created. What is your favorite Duane Allman Solo?

CrashCourseMuso Studio - 5min.com Better Than Takeout Orange Chicken Yesterday as I stood in the kitchen trying to figure out what to make for dinner I wondered to myself, how do those people do it on those shows where they are given random ingredients and are suppose come up with something genius. I think I stood there for a solid 20 minutes looking in the cupboards and staring into the freezer hoping that I would be struck by some ingenious idea. Then I saw the oranges, and it hit me “O-raang Shh-ikun”….that is orange chicken if you can’t understand the accent. I love orange chicken, and I almost always order # 14 Orange Chicken when we order Chinese take out and I wondered to myself if I could make it better at home. This recipe most definitely delivered! The sauce is sweet, tangy, there is no lack in orange flavor, and the red pepper flakes give it just a touch of heat. Combine corn starch, salt, and pepper. As you finish each batch, drain cooked chicken in a paper towel lined plate. Better Than Takeout Orange Chicken Ingredients Chicken 2 eggs, beaten