These sites are the meat of the trip. This is what you will use to take the students on their VTF. Includes Google Street View, Broadway top down view, and individual sites for each theater, previewed for content.

Note: Some theaters/plays/musicals may contain controversial material. If there is anything that may contain inappropriate or questionable material, I have created a comment to include a description of the material. A Welcome to the Great White Way for Students! Broadway Street View. Theaters on the Broadway Strip from Spotlight on Broadway. Inside The Broadway Theater.

This video makes mention of the main character in Gypsy being a stripper. It is only a brief, single mention of her occupation, though. – deannacritchley

Inside the Neil Simon Theater. Originally called the Alvin Theatre, it was built by Alexander H.

Features "Hairspray" which includes a male playing the role of a female, and makes mention of this. – deannacritchley 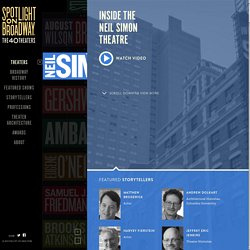 The name of the theater was an acronym of their two first names. Designed by Herbert J. Krapp, it is one of his more elegant theaters, particularly the interior, which boasts an eighteenth-century Adameque style with plaster ornamentation reminiscent of Wedgewood pottery and a mural of a pastoral scene over the proscenium. The exterior’s divided facade is also distinctive; due to additional height requirements needed to move scenery, the right side, which houses the theater, is taller than the left side. Inside the Gershwin Theater. Inside The Palace Theater. Inside the Lyceum Theater. The Lyceum and the New Amsterdam are the oldest theaters on Broadway; the Lyceum, built in 1903, has the further distinction of being the oldest continually operating theater and the first to obtain landmark status.

Features two plays, one "A Hatful of Rain" which discusses abuse and "I Am My Own Wife" which has a transgender character. – deannacritchley

The architects Herts & Tallant created innovative cantilevered balconies that obviated the need for posts or other structural encumbrances. 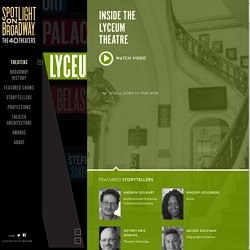 They were also interested in the auditorium’s lighting effects and installed bare bulbs throughout the interior plasterwork rather than a chandelier, which gives the interior a golden glow. The lobby is decorated with murals by James Wall Finn that celebrate Sarah Siddons and David Garrick, stars of eighteenth-century theater in the United Kingdom. The theater was built by Daniel Frohman, a Broadway pioneer and one of the first impresarios to move a theater north to the Times Square area. He partnered with his brother Charles on many productions until Charles’s drowning on the Lusitania in 1915. Inside the Al Hirschfeld Theater. In 1924, when theater impresario Martin Beck was forced out of management of the Orpheum Theatre circuit, he built the Martin Beck, now the Al Hirschfeld.

"Kinky Boots" is in the now playing section, a musical about making boots for drag queens. – deannacritchley 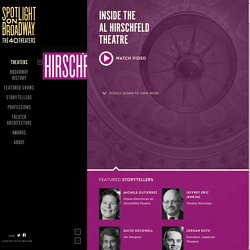 Albert Lansburgh, a native San Franciscan known for his elaborate West Coast movie palaces, to design the theater. Lansburgh incorporated Byzantine, Moorish, and Islamic elements into much of his work, including this theater’s façade, a long, three-story Moorish arcade that was very three dimensional. Inside the Belasco Theater. David Belasco, producer, director, playwright, and one of the most important personalities in the history of American theater, built this house (originally known as the Stuyvesant Theatre) in 1907 to create an intimate and natural theater experience for his audiences.

This video does contain some images of artistic semi-nudity in the artwork around the theater. Be aware of this before showing to some age groups and classes. – deannacritchley

He was a pioneer of the Little Theater Movement, which advocated close contact between audience and actors. 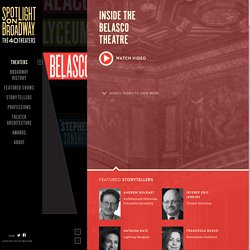 The building is neo-Georgian, a style often associated with town houses, thus reflecting Belasco’s desire for intimate drama. It contained murals by Albert Crisp and Ashcan artist Everett Shinn and vestibule and doors by John Rapp as well as many light fixtures by Tiffany studios. The building served as both Belasco’s theatrical and personal home after 1909, when his ten-room rooftop duplex apartment was completed. The eclectically decorated apartment contained a crypt and housed Belasco’s various collections of Napoleonic paraphernalia, art, and erotica.

Inside the Stephen Sondheim Theater. The theater was originally built in 1918 for Henry Miller, an actor, producer, manager, and sometime playwright, whose name is still visible on the theater’s facade.

Born in London, Miller came to New York in 1917 and decided to build a theater for himself. 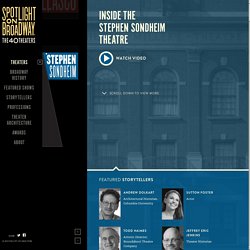 He hired architects Ingalls & Hoffman, and his friend Paul Allen to work with them. They designed the exterior to mimic an eighteenth-century New England building. After Miller’s death in 1926, his family continued to operate the theater until 1968, at which time it was sold. In the ensuing years it became a pornography theater and later converted into a night club. Inside the Nederlander Theater.