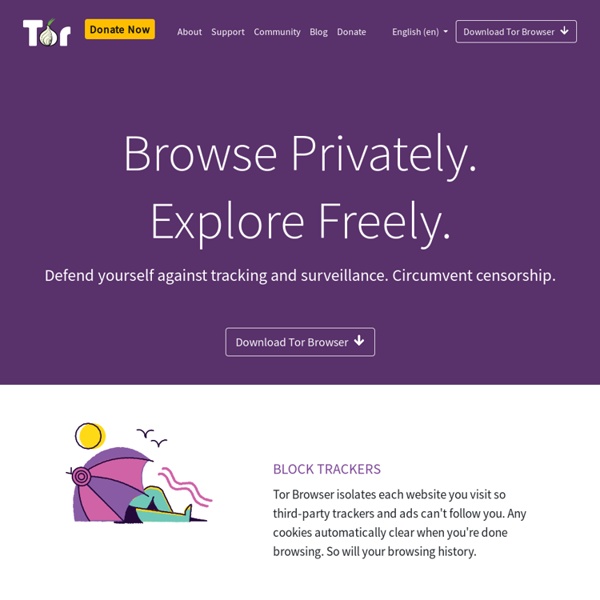 Family & Friends People like you and your family use Tor to protect themselves, their children, and their dignity while using the Internet. Businesses Businesses use Tor to research competition, keep business strategies confidential, and facilitate internal accountability. Activists Activists use Tor to anonymously report abuses from danger zones.

Despite hoaxes, anonymity remains important Over the past few weeks, much of the world's attention was captured by the story of supposed Syrian blogger Amina Arraf, also known as "Gay Girl in Damascus". From reports on June 6 of Arraf's alleged kidnapping by Syrian security forces to the June 12 confession from American Tom MacMaster that he had fabricated Arraf's entire persona, the story unfolded rapidly, leaving the public confused in its wake. Central to this story is the role that traditional media played in perpetuating what is now known to be a hoax. Though the persona of Amina Arraf was created as early as 2007, Arraf's blog did not gain prominence until earlier this year when, after a small amount of hype in the blogosphere, two major publications - the Guardian and CBS - wrote pieces profiling the blogger. The Guardian in particular has come under fire for a March article, in which a pseudonymous journalist in Damascus "interviewed" Arraf without disclosing that she had never met the blogger in person.

This is what a Tor Supporter looks like: Laura Poitras The first thing that Laura Poitras has to say about Tor is that she couldn’t have made Citizenfour without it. “There’s no way I would have been able to protect the initial source without using Tor,” she says. “Fundamentally, without Tor and other free software tools I wouldn’t have been able to do the reporting, and the story would not have been broken.” Laura also recalls her own learning process around encryption that allowed her to communicate easily with Snowden when he first contacted her. “I’ve been on a government watch list since 2006,” she says.

5 ways to easily increase your internet security - Seattle Political Buzz In this age of technology nothing is private. In fact, NSA whistleblower William Binney recently stated that literally every email sent in the US is recorded by the FBI. For those living in reality, it has been know that since the 90's under President Clinton, programs such as Echelon monitored nearly every phone call, fax, and email in the United States. Sites like Facebook have been known to record users web history even when they are logged out. Google has had to pay out millions for its privacy violations such as disabling privacy settings on Internet browsers to allow them to track you.

PhotoRec - Digital Picture and File Recovery Latest stable version 7.0 April 18, 2015 PhotoRec, Digital Picture and File Recovery PhotoRec is file data recovery software designed to recover lost files including video, documents and archives from hard disks, CD-ROMs, and lost pictures (thus the Photo Recovery name) from digital camera memory. The New Yorker Our privacy promise The New Yorker's Strongbox is designed to let you communicate with our writers and editors with greater anonymity and security than afforded by conventional e-mail. When you visit or use our public Strongbox server, The New Yorker and our parent company, Condé Nast, will not record your I.P. address or information about your browser, computer, or operating system, nor will we embed third-party content or deliver cookies to your browser.

Would Anonymity Help Activists on Facebook? A Response to Luke Allnutt Luke Allnutt has a thoughtful piece on RFE/RL asking the above question: Would anonymity help activists on Facebook? His response, “maybe not,” relies on the idea that anonymity would be extended only to those with special “activist status,” something I haven’t heard concretely argued as a potential model but which is nonetheless troubling. Allnutt writes: If Facebook had a special “activist’s status,” where it officially allowed some accounts to be pseudonymous, where does it draw the line? I would assume that as long as they’re not advocating violence or hate speech, then any activist would be entitled to such protection– that would mean Middle East democracy fighters, but also anti-gay groups or guys from the English Defense League.

The 7 Privacy Tools Essential to Making Snowden Documentary CITIZENFOUR What needs to be in your tool belt if you plan to report on a massively funded and ultra-secret organization like the NSA? In the credits of her newly released CITIZENFOUR, director Laura Poitras gives thanks to a list of important security resources that are all free software. We've previously written about CITIZENFOUR and Edward Snowden's discussion of his motivation to release closely guarded information about the NSA. Here's a closer look at the seven tools she names as helping to enable her to communicate with Snowden and her collaborators in making the film. Tor Facebook privacy and kids: Don’t post photos of your kids online Photo by Hemera/Thinkstock I vividly remember the Facebook post. It was my friend’s 5-year-old daughter “Kate,” (a pseudonym) standing outside of her house in a bright yellow bikini, the street address clearly visible behind her on the front door.

Create Your Own Customized Gifts at CafePress Design your own...anything! Give the gift that really counts. Think personalized gifts and personal style, shirts that celebrate team spirit, family reunion items, or just a way to promote your favorite cause. Choose your Product to Customize The 12 Best Firefox About:Config Performance Tweaks Below are a few of our favorite Firefox performance hacks, tweaks, and productivity enhancements that can be made via the About:config of Firefox. We show you step-by-step how to perform the tweaks and what each of the tweaks are responsible for and how they improve your performance in Firefox and increase your productivity. Make Firefox Give Back RAM When Minimized Typically when a program in Windows is minimized for a period of time, the program will give back the RAM that it used so that users of the system can use the memory for other applications that may be running. By default, Firefox does not perform in this matter, making your system run lower on RAM than it should. To enable the setting so that Firefox gives back RAM, do the following:

Eric Raymond I agree with +David Formosa about Facebook. They've had years to show that the lack of anonymity leads to a troll-free environment, and they have failed in that regard and there are notable cases of trolling. It's not the anonymity of the Internet, but the remote nature of it. You can say things without fearing immediate consequences.

Who uses Tor? Tor was originally designed, implemented, and deployed as a third-generation onion routing project of the Naval Research Laboratory. It was originally developed with the U.S. Navy in mind, for the primary purpose of protecting government communications. How to foil NSA sabotage: use a dead man's switch The more we learn about the breadth and depth of the NSA and GCHQ's programmes of spying on the general public, the more alarming it all becomes. The most recent stories about the deliberate sabotage of security technology are the full stop at the end of a sentence that started on 8 August, when the founder of Lavabit (the privacy oriented email provider used by whistleblower Edward Snowden) abruptly shut down, with its founder, Ladar Levison, obliquely implying that he'd been ordered to secretly subvert his own system to compromise his users' privacy. It doesn't really matter if you trust the "good" spies of America and the UK not to abuse their powers (though even the NSA now admits to routine abuse), you should still be wary of deliberately weakened security. It is laughable to suppose that the back doors that the NSA has secretly inserted into common technologies will only be exploited by the NSA. One important check against the NSA's war on security is transparency.