Darkman (1990) Download YIFY movie torrent - YTS. Of all the super-hero movies around, "Darkman" is my favourite. 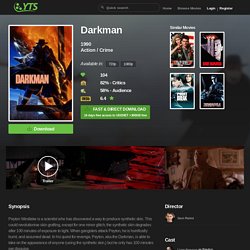 An original creation from Raimi, and not based on any comics, "Darkman" follows the story of Dr. Peyton Westlake, a scientist about to make a breakthrough in synthetic skin. Peyton's girlfriend, Julie Hastings is a hot-shot lawyer who gets on the wrong side of Robert G. Durant. Durant and his henchmen destroy Peyton's lab, and leave him for dead. Darkman has no real super-powers - apart from some increased strength and his inability to feel pain - he uses the synthetic skin to assume the alternate identities, and fights his battles that way.

Others have mentioned the parallels to 'Robocop'. The Maze Runner (2014) Download YIFY movie torrent - YTS. My English is so bad, I don't speak English, but i'm trying hard to write this review! 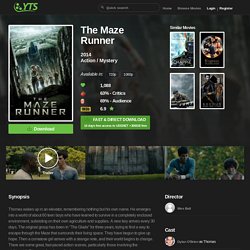 So you knew my disappointment Don't waste your time and money watching this. I keep on cursing during the movie. Fury (2014) Download YIFY movie torrent - YTS. One of the crappiest war movies I've ever seen, if not the worst! 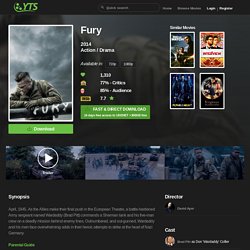 Firstly: No story, no real plot. War is almost over, maybe in 2-3 weeks and there are just 5 guys driving around in tank and fighting still resisting Germans. And than suddenly everything depends on them. Namely unit with cooks is left defenseless and if they got beaten whole division would be lost. OMG!!! Well, to this point it wasn't so bad. They got stuck on some crossroad in the middle of nowhere. When battle starts, man just starts wondering how Germany managed to beat anyone and occupy anything with so dumb soldiers. Epilogue: Long story short. Anyway acting was pretty good (3 stars are for this), but script was so awful. 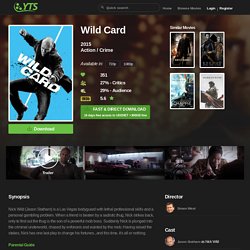 "Wild Card," in which Jason Statham plays a character named Nick Wild, only adds to those expectations. And so, it's a bit baffling that this second attempt (the first is a mostly forgotten 1986 Burt Reynolds vehicle) at bringing William Goldman's novel "Heat" to the big screen  adapted by the legendary screenwriter himself  seems uncertain what to do with the star, or the material. Trying to find a middle ground between an action packed Statham vehicle, a '70s style mood piece, and a '90s era character-actor packed crime tale, "Wild Card" is not surprisingly an unsuccessful marriage of those ill-fitting genres that strains to fill the already meagre, barely ninety minute run time with anything of substance.

"...do not waste the audience's time. Seventh Son (2014) Download YIFY movie torrent - YTS. Hollywood has of late had a lousy track record of fantasy action epics, and 'Seventh Son', which arrives just in time to close off the year, is yet another blemish to add to that list. 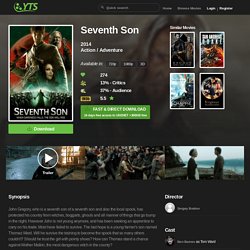 Delayed nearly a year while its production company Legendary switched studios, this Universal release assembles A-listers Jeff Bridges and Julianne Moore with 'The Chronicles of Narnia' star Ben Barnes for an expensive big- screen adaptation of the first book of Joseph Delaney's 'The Wardstone Chronicles' against tawdry sets and second-rate visual effects. We aren't usually that critical of a film's production design, but there is just something awfully dreary about the widescreen world of Russian director Sergei Bodrov's debut English-language feature. Alas the unattractive visuals are just one of the litany of complaints that you are likely to have. What production designer Dante Ferretti fails to accomplish in sets, visual effects designer John Dykstra also fails to make up for in post-production. 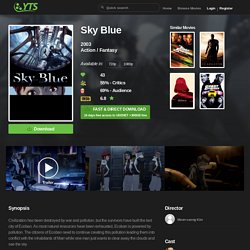 It's more like a movie, only an animated one. My emphasize here is on the word movie. The Warrior's Way (2010) Download YIFY movie torrent - YTS. The concept in itself sounds cool. 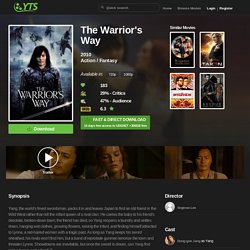 Assassins from the east battle against cowboys from the west. With The Warrior's Way, we get the best of both worlds with likable characters, especially the little baby. The setting of the movie is very stylized, and brings you a very romanticized western. The same can be said about the eastern setting. You can tell that the director loves Sergio Leone and Akira Kurosawa movies. Pirates of the Caribbean: The Curse of the Black Pearl (2003) Download YIFY movie torrent - YTS. A damn good movie. 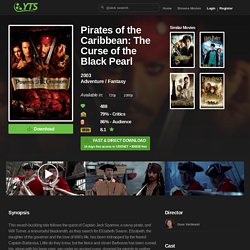 One of the best of 2003 in my view. This movie made me laugh, and it really pulled me in. At first I was afraid this would be another bad Pirate movie. I went to see it anyway, as I've always loved the legends of pirates, and I love adventure. I saw it once. Dragonheart 3: The Sorcerer's Curse (2015) Download YIFY movie torrent - YTS. Login Register If you have Forgotten your password, just type in your Email and we will send you a link to Reset your password. 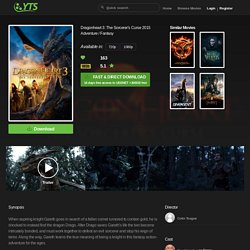 Blade: Trinity (2004) Download YIFY movie torrent - YTS. Unfortunately this movie didn't have the impact on me that the first two did. 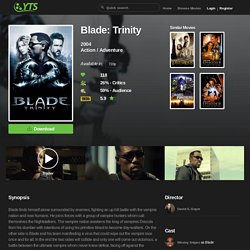 I've been a big fan of Vampire movies in general as well as the first two movies of the Blade series, so I'm an avid fan of the subject. While this movie offered more in the comedy & comic book feel, it lost the originality, horror, and suspense IMO. Pros  Cool new weapons & some plucky comedy. Cons  Lacked any kind of suspense / horror feeling, wasn't serious at all, more of a popcorn movie than the first two. Also a comic book cinematography feel that kind of bothered me. Blade II (2002) Download YIFY movie torrent - YTS. Blade II is an exciting action film that takes the tired vampire story and adds a new twist by introducing an entirely new villain. Sure, there is sure to be some controversy (at least among film fans and fans of the genre) about whether or not it is right to introduce new characters in this way. Vampires are a tired theme at the movies, but it is a time-honored genre in itself that deserves respect just from the fact that it has been around for so long in literature before the movies.

The question of whether or not the writers were justified in introducing these new characters is, in my opinion, satisfied by the fact that they made such quality villains that fit so well into the genre. Deja Vu (2006) Download YIFY movie torrent - YTS. It's a real shame that everything I had read about Deja Vu concerned the high-powered explosions and loud clatter of guru/producer Jerry Bruckheimer. No mention, except maybe as a footnote, was given to A-list director Tony Scott and the magic he has woven in his past three films.

The man who brought us Top Gun has seen a sort of revival in style lately with the entertaining Spy Game, the amazing Man on Fire, and the kinetic Domino. Scott has taken the quick cuts of music videos and has infused them into his shooting style. His editor better be making some good money as these films fly by with filters, jump-cuts, grain, and camera angles swiveling at every turn. Greatly overshadowed by brother Ridley Scott and his more serious, award-winning epics, Tony has been pumping out some of the most solid and entertaining films of the past couple decades. Deja Vu could have easily reduced itself to timetravel farce, going by the books to show a time warp in order to solve a crime. Predator (1987) Download YIFY movie torrent - YTS. Consider that so many of the roles that Arnold Schwarzenegger takes on are so similar, including Predator, and yet this film is so much better than most of the others.

I enjoy watching his movies just because he's such a watch-able guy, even in his bad movies (which are many), but I think the thing that really makes Predator stand out is its simplicity. The movie starts, the guys get dropped in the jungle, lots of blood and carnage flies across the screen, and the movie simply ends. No romance, no complex back story, no soldier struggling with problems in his past or even trauma caused by the horrible things he experiences during the movie.

And then the Death Star homes in on the Rebel Base - Umm, I mean the mining ship homes in on Starfleet headquarters, and only Luke Skywalker can stop it by ignoring orders and turning off his targeting computer and trusting the Force - no, I mean only Jim Kirk can stop it by ignoring Starfleet's orders and trusting his instincts. It's a good thing Old Ben Kenobi was there to give Kirk that fatherly advice earlier - no, wait, that was Captain Pike. And then they had a big old celebration, and Luke and Han got medals - err, I mean, Jim Kirk got a medal and was made captain. This movie was terrible. Crank: High Voltage (2009) Download YIFY movie torrent - YTS. Synopsis Chelios faces a Chinese mobster who has stolen his nearly indestructible heart and replaced it with a battery-powered ticker that requires regular jolts of electricity to keep working. Chev Chelios survives a fall from the sky, sort of. Rush Hour (1998) Download YIFY movie torrent - YTS.

Detective James Carter (Chris Tucker) is a wisecracking, plays by his own rules type policeman who gets a little bit carried away with his job. Man of Steel (2013) Download YIFY movie torrent - YTS. This review is going to be full of spoilers because I am going to mention various gaping plot inconsistencies and outright idiocies in this dog of a film. Sure, it looks great and the special effects are generally well done. But some people need their movies to at least make some sense. Guardians of the Galaxy (2014) Download YIFY movie torrent - YTS. Great expectations before the film, definitely, and they really paid off. Guardians of the Galaxy is one of the best Marvel films to date, and a really good sci-fi at that too. The film is strong on so many levels, outstanding characters, great worlds, is emotional and humorous.

Peter Quill, or Star Lord as he likes to call himself, is a quick-witted man of Earth thrown into the far reaches of galaxy, who has stolen an artifact that everyone seems to want. Lucy (2014) Download YIFY movie torrent - YTS. Login Register If you have Forgotten your password, just type in your Email and we will send you a link to Reset your password. First Blood (1982) Download YIFY movie torrent - YTS.

This is certainly not the greatest film ever made. in fact, it's plot is predictable and formulaic, and every character is two-dimensional. having said that, this is a film that is often dismissed as a macho action flick with no redeeming feature. these are opinions i would defy. while the only imagination put into the film seems to be the various ways in which John Rambo can kill people, the basic theme is nevertheless a pretty strong one. this is not meant to be a Fellini-esque commentary on life, the universe, and everything. the three most important characters in the film are all played by pros. you have Stallone's John Rambo, Dennehy's Sheriff Teasle, and Richard Crenna's Colonal Trautman.

Crenna is a patriarchial character, such as he often seems to play. he gives the Spec Ops Colonal Trautman enough soul to make him seem human, and enough blood and guts to make him seem like a veteran soldier. of course, the centrepiece to the film is Sylvester Stallone. Big Hero 6 (2014) Download YIFY movie torrent - YTS. Sadly, this was a huge step back for WDAS. This was definitely no Frozen. The Interview (2014) Download YIFY movie torrent - YTS. Action / Comedy Available in: 720p 1080p.