The Silent Music of the Mind: Remembering Oliver Sacks – Brain Pickings. By Maria Popova I was a relative latecomer to the work of Oliver Sacks (July 9, 1933–August 30, 2015), that great enchanter of storytelling who spent his life bridging science and the human spirit — partly because I was not yet born when he first bewitched the reading public with his writing, and partly because those early books never made it past the Iron Curtain and into the Bulgaria of my childhood. 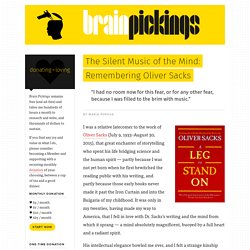 It was only in my twenties, having made my way to America, that I fell in love with Dr. Sacks’s writing and the mind from which it sprang — a mind absolutely magnificent, buoyed by a full heart and a radiant spirit. His intellectual elegance bowled me over, and I felt a strange kinship with many of his peculiarities, from the youthful affair with iron — although the 300-pound squats of my bodybuilding days paled before his 600 pounds, which set a state record and earned him the moniker Dr. Albert Camus on Happiness and Love, Illustrated by Wendy MacNaughton – Brain Pickings. In this new installment of the Brain Pickings artist series, I’ve once again teamed up with the wonderfully talented Wendy MacNaughton, on the heels of our previous collaborations on famous writers’ sleep habits, Susan Sontag’s diary highlights on love and on art, Nellie Bly’s packing list, Gay Talese’s taxonomy of New York cats, and Sylvia Plath’s influences. 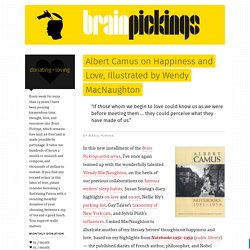 I asked MacNaughton to illustrate another of my literary heroes’ thoughts on happiness and love, based on my highlights from Notebooks 1951–1959 (public library) — the published diaries of French author, philosopher, and Nobel laureate Albert Camus, which also gave us Camus on happiness, unhappiness, and our self-imposed prisons. The artwork is available as a print on Society6 and, as usual, we’re donating 50% of proceeds to A Room of Her Own, a foundation supporting women writers and artists. Enjoy! If those whom we begin to love could know us as we were before meeting them … they could perceive what they have made of us. Susan Sontag on Art: Illustrated Diary Excerpts – Brain Pickings. By Maria Popova Earlier this year, I asked artist extraordinaire Wendy MacNaughton to illustrate Susan Sontag’s meditations on love, based on my collected highlights from the second volume of Sontag’s published diaries, As Consciousness Is Harnessed to Flesh: Journals and Notebooks, 1964-1980 (public library). 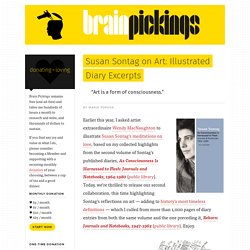 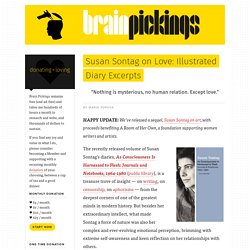 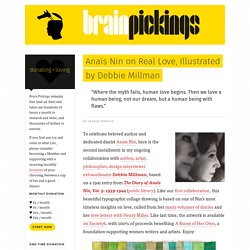 Anaïs Nin on Love, Hand-Lettered by Debbie Millman – Brain Pickings. By Maria Popova Revered as one of the most dedicated diarists in literary history, Anaïs Nin has given us a wealth of poetic and poignant meditations on life and the human condition. 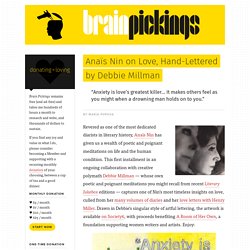 This first installment in an ongoing collaboration with creative polymath Debbie Millman — whose own poetic and poignant meditations you might recall from recent Literary Jukebox editions — captures one of Nin’s most timeless insights on love, culled from her many volumes of diaries and her love letters with Henry Miller.

Drawn in Debbie’s singular style of artful lettering, the artwork is available on Society6, with proceeds benefiting A Room of Her Own, a foundation supporting women writers and artists. Enjoy: UPDATE: Happy news! 7 Life-Learnings from 7 Years of Brain Pickings, Illustrated – Brain Pickings. By Maria Popova In the fall of 2013, as Brain Pickings was turning seven, I wrote about the seven most important things I learned in those seven years of reading, writing, and living. 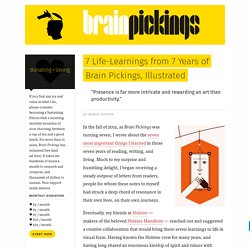 Much to my surprise and humbling delight, I began receiving a steady outpour of letters from readers, people for whom these notes to myself had struck a deep chord of resonance in their own lives, on their own journeys. Eventually, my friends at Holstee — makers of the beloved Holstee Manifesto — reached out and suggested a creative collaboration that would bring these seven learnings to life in visual form. Having known the Holstee crew for many years, and having long shared an enormous kinship of spirit and values with them, I was instantly in. We worked with Uruguayan illustrator and graphic designer Martin Azambuja, who came up with the visual metaphor of a mobile for an added layer of symbolism. Read the original article here and grab a print here. Famous Writers’ Sleep Habits vs. Literary Productivity, Visualized – Brain Pickings. “In both writing and sleeping,” Stephen King observed in his excellent meditation on the art of “creative sleep” and wakeful dreaming, “we learn to be physically still at the same time we are encouraging our minds to unlock from the humdrum rational thinking of our daytime lives.” 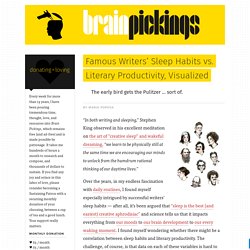 Over the years, in my endless fascination with daily routines, I found myself especially intrigued by successful writers’ sleep habits — after all, it’s been argued that “sleep is the best (and easiest) creative aphrodisiac” and science tells us that it impacts everything from our moods to our brain development to our every waking moment.

I found myself wondering whether there might be a correlation between sleep habits and literary productivity.