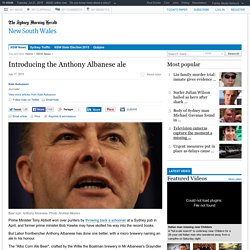 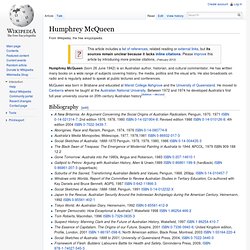 He has written many books on a wide range of subjects covering history, the media, politics and the visual arts. He also broadcasts on radio and is regularly asked to speak at public lectures and conferences. McQueen was born in Brisbane and educated at Marist College Ashgrove and the University of Queensland. He moved to Canberra where he taught at the Australian National University. Between 1972 and 1974 he developed Australia's first full-year university course on 20th-century Australian history[dubious ].

The life and work of the self-employed socialist intellectual, Humphrey McQueen. By Bob Gould Never trust Tories bearing gifts There is a tradition in academia of dedicating to veteran or retiring scholars a "feschrift", which is usually a collection of essays by other scholars about the scholar's chosen field and their contribution to it. 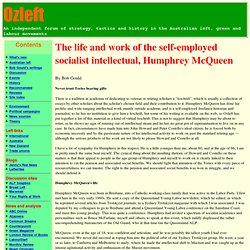 Humphrey McQueen has done his prolific and wide-ranging intellectual work mainly outside academe, and is a self-employed freelance historian and journalist, so he has no institution to give him a feschrift, but some of his writing is available on the web, so Ozleft has put together a list of this material as a kind of virtual feschrift. This is not to suggest that Humphrey may be about to retire, as he shows no sign of running out of intellectual steam and he has no great pot of superannuation to live on in any case. Politically homeless. First, there was this superb dissection of how The New York Times published only the story its journalist was able to write. 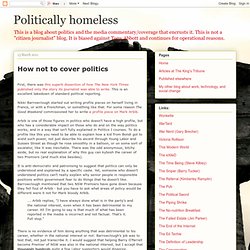 This is an excellent takedown of standard political reporting. Nikki Barrowclough started out writing profile pieces on herself living in France, or with a Frenchman, or something like that. For some reason The Good Weekend commissioned her to write a profile piece on Mark Arbib. Private schools get $12b advantage: union - ABC News (Australian. Timothy McDonald for AM Updated Mon 18 Jan 2010, 1:34pm AEDT A new report commissioned by the Australian Education Union shows the Federal Government is giving more money to private schools than public schools. The report says that private schools will receive $12 billion more funding than their public counterparts over the life of the current five-year funding agreement. Over the six years to 2013, private schools will get $47 billion, while public schools will get $35 billion.

Only one third of school students attend private schools. The union's federal president, Angelo Gavrielatos, says the Federal Government needs to overhaul its funding system. "A discredited, unsustainable schools funding system must be replaced with a funding system that provides a primary obligation, a primary focus, on government schools across Australia," he said.

"After all, true equity in the provision of education can only be guaranteed if it is government schools that set the standard for high quality. " Gillard angered by KKK cartoon - ABC News (Australian Broadcasti. Updated Sat 9 Jan 2010, 7:19am AEDT Acting Prime Minister Julia Gillard has reacted angrily to a cartoon published in India that depicts a police officer in a Ku Klux Klan outfit. The Delhi Mail Today newspaper published the cartoon in response to the murder of Indian student Nitin Garg in Melbourne last weekend. Les crucifixions de Facebook. Médias sociaux : rétrospective de l’année 2009 en dessins et en.